A fake news article was discovered by Trendolizer to be trending on Sunday January 29th 2017 which falsely claimed that Dubai had threatened to deport all US citizens in response to the recent executive action by president Donald Trump to temporarily suspend immigration for 90 days from 7 countries (Iraq, Syria, Iran, Libya, Somalia, Sudan and Yemen). 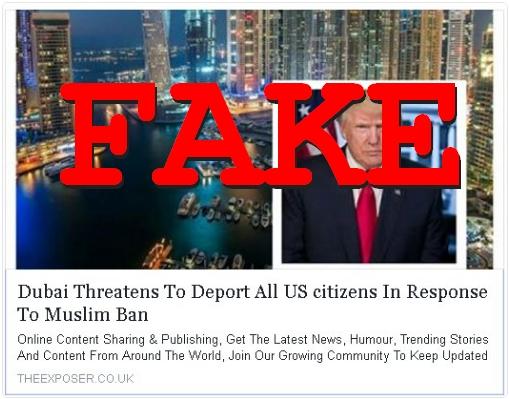 The site spreading the fake news is currently offline, but a copy in Google's cache reads as follows:

The United Arab Emirates Is said to be reviewing Legislation To deport all US Citizens In The Wake Of Trumps Muslim Ban,

That is literally the entire article. Also on the same page is following disclaimer:

In other words, an unsourced, unverified claim that has not been confirmed anywhere else (we checked). Yet so many people decided to share the news anyway that it made the server hosting 'The Exposer' go down as this Trendolizer-generated graph shows: