A fake tweet reading: "After 17 minuts phone call with President Trump, I think he will go down to history as one of the greatest presidents just like Reagan." is making the rounds on social media and on various fake news websites. 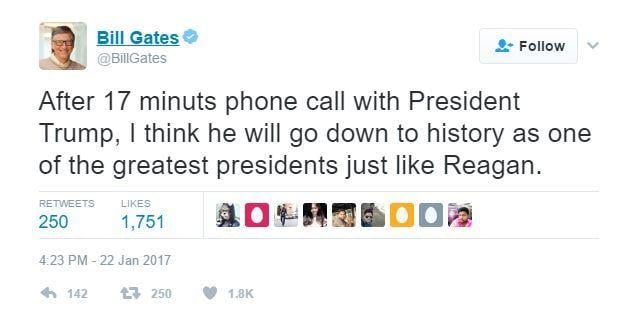 The tweet reads like something a 15-year old kid would have written ("minuts", "down to history") and was probably generated using one of the many websites where fake tweets can be created by anyone with two minutes of time to spare.

You shouldn't believe the tweet because Trump already said it was fake himself:

Or maybe we just made that tweet up using faketrumptweet.com, who knows?

Meanwhile on Bill Gate's Twitter account, not a single tweet can be found even mentioning the word "Trump" so next time you see someone passing this tweet around as real just send them here...