Fake news website Meganews360 (which redirects to news.states-tv.com) came out with an article titled "Popular Maltese Restaurant Shut Down For Serving Human Flesh". The fake story begins like this:

A hotel restaurant in Valletta, Malta has been closed down by authorities for serving human flesh to consumers. According to our local correspondent, suspicious residents told police of rumors that the restaurant was cooking human meat for customers. Police then raided the restaurant, where they discovered processed human hands and fresh human heads that were still bleeding. The blood was in the process of being drained into a plastic bag. In addition to the illegal meat, authorities discovered automatic weapons, grenades, and cell phones. Ten people were arrested in conjunction with the crimes. For security reasons, the name of the restaurant is withheld for the mean time.

First clue the story is fake: It is very convenient that the name of the restaurant is missing as it would be the most important part if the article was true. We also never learn the name of the local correspondent or even the author of the article.

Second clue: the picture that accompanies the article is not really a human hand: it actually consists of saussage and prosciutto. 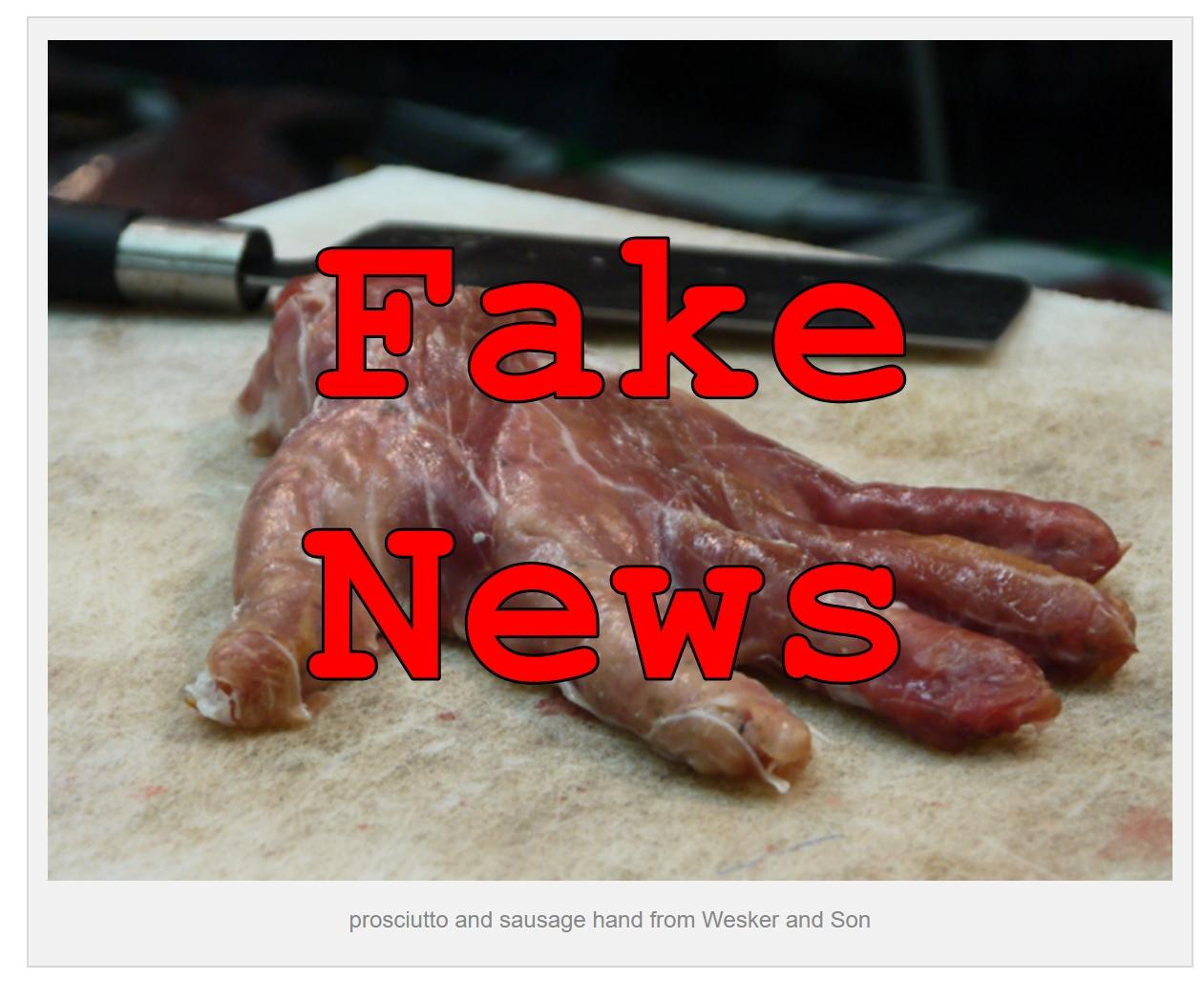 The image comes from a 2012 article at Picky Glutton about a fake "human meat butcher" set up to promote the video grame "Resident Evil 6". This article reads in part:

I don't have much time for marketing stunts, but the Wesker and Son pop-up butchers at London's Smithfield Market piqued my interest. Organised by the publishers of the upcoming Resident Evil 6 video game, Wesker and Son sells meat made to look like human body parts. I managed to sneak in without revealing my identity and managed to get a look around. Sadly the man on duty wasn't actually a butcher so he wasn't able to tell me much about the pork used. Still, Wesker and Son is nothing if not a giggle and is open Friday 28th and Saturday 29th September from 09.00 to 18.00.

The same image has been featured in several other hoax news articles about cannibalism, you can see dozens of copies on Google image search, sometimes linking it to a different hoax about McDonald's using human meat.

A third clue is that many of the details in the story are lifted almost verbatim from another hoax article from 2015 about a restaurant in Nigeria selling human meat. The blood dripping in the bag, the grenades, the suspicious people at the hotel, the priest, the small piece of meat driving up the bill... It would be quite the coincidence if the exact same events happened in two different cities in two different countries.

Despite these obvious warning signs many people still fell for the hoax as you can see in the Trendolizer graph at the end of this article. If you notice anyone spreading the rumor around you can help by pointing them to this article here because nobody likes fake news.