The notorious fake news website The Resistance: The Last Line of Defense just published a hoax article titled: "BREAKING: Saturday Night Live Cancelled After Lowest Ratings EVER" but this is absolutely not true. The article claims:

After 40 years of successful ratings, springboarding dozens of careers of comedic brilliance to super-stardom, Saturday Night Live has fallen flat. By forgetting that it's a comedy variety show and not a leftist propaganda outlet, the show's writers and actors have doomed it to oblivion.

The American people have spoken. Saturday night live, through its divisive skits and hate speech towards our president, has alienated more than 70 percent of its viewers. The ratings are so low that advertisers have refused to continue their relationships with the show and some have threatened to leave NBC altogether.

We are very disappointed with Lorne Michaels, Mr. Baldwin and the writers who have managed to take this icon of American television and turn it into such a disgrace.

There is no such statement on the site of NBC at the moment of writing according to Google:

There are more clues the story is fake. Look closely at the list of categories the article was posted under, this is clear nonsense: 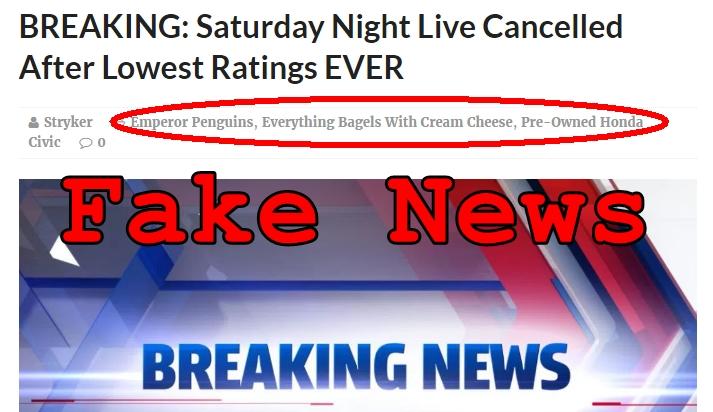 This is a signature move of The Last Line of Defence: it tends to include nonsensical phrases or insults hints in the list of "categories" under the article titles, for example this one:

These phrases are meant to subtly mock the people who believe the stories are true and who share them on social media without checking their sources.

The website also carries following disclaimer on its about page:

The site appears to be part of a larger network of sites that all seem to repost the same articles mentioning it as the source but not acknowlediging the satire disclaimer. This causes many people to believe the fake stories especially when they are being shared on social media where even more context is removed and only the title, image and description remain. Sites in the network appear to include:

The story is relatively fresh but already being shared around widely as you can see in the Trendolizer graph at the end of this article. If you notice anyone spreading this clear misinformation you can help by pointing them to this article here because nobody likes being duped by fake news.