4,000 Feet Below Sea Level -- In a rare tweet from Mark Zuckerberg, the social media giant Facebook has announced it will be eliminating all groups associated with, or related to spreading, flat earth propaganda from its social media platform. Mr. Zuckerberg cited, "as one of many reasons," a young man's suicide which occurred because the young man could no longer "live in a world of lies."

The young man was a long-time flat earth advocate and flat earth shill on facebook, primarily in flat earth groups. He was also known to post flat earth gibberish in recipe groups and dog injury groups as well, but that's really beside the point. He was one of those people who really does believe the earth is flat. Well, he did until he died. 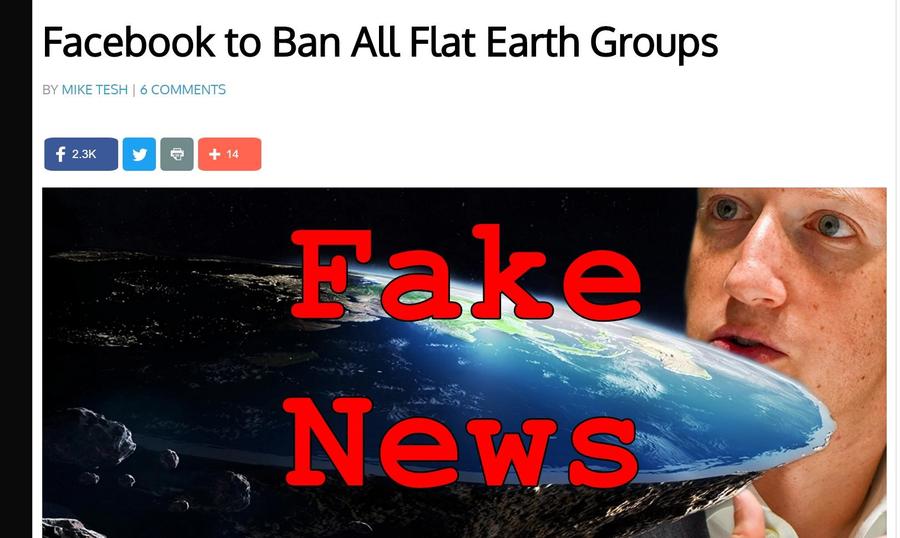 Of course the entire story is nonsense, from the made up Mark Zuckerberg quote

Mark Zuckerberg has made clear his intentions to change all that mass-stupidity, perhaps saving your grandma and drunk uncle in the process. "After all," Mark explains via Twitter, "I see you all as my children, and I still have to protect you."

to the made up Facebook spokeswomand Bethany Millbright (who is a character that shows up in several Nevada Country Scooper articles in various roles).

This is because The Nevada County Scooper (NCScooper) is a fake news website with following satire disclaimer on their Terms and Conditions page:

The story is proving quite popular as the Trendolizer graph at the end of this article shows. If you see flat-earth adherents believing this nonsense, do send them over here: it would be a shame if they were mislead into believing something that was not true.