A fake news website by the name of As American As Apple Pie posted an article titled "Muslim Federal Judge Rules Two Items Of Sharia Law Legal" which began:

Judge Mahal al Alallaha-Smith of the 22nd District Federal Court of Appeals ruled this morning that two "critical issues for Muslims" in Sharia Law had to be abided by in the United States court system because of the systematic infusion clause and because the 14th Amendment guarantees them the rights guaranteed by other states. 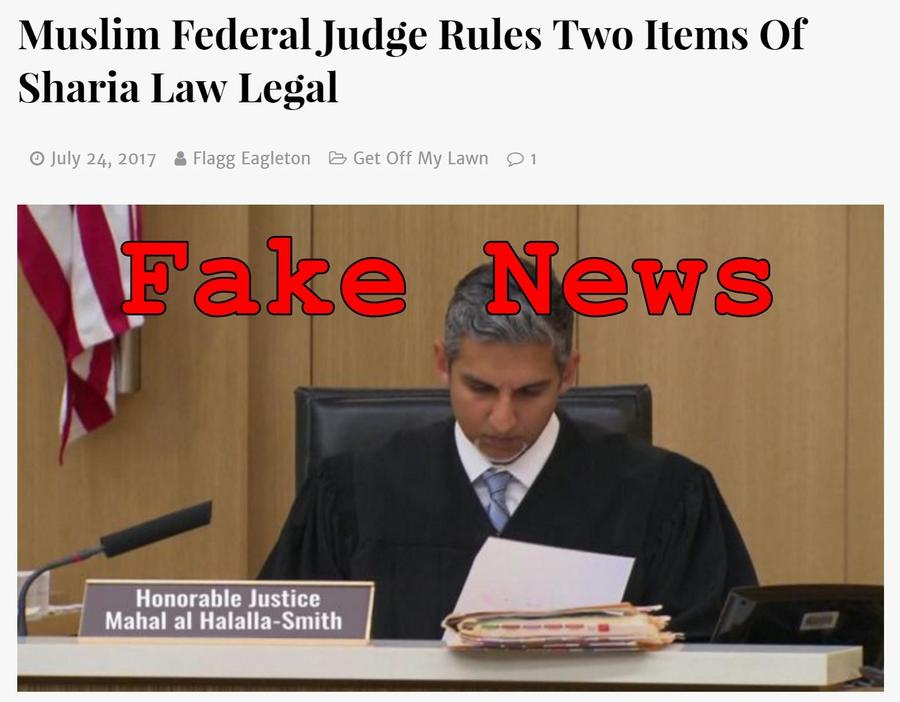 There are several good reasons why this article is completely bogus:

CNN's Kyung Lah speaks to Muslim Judge Halim Dhanidina, who says his religious beliefs do not affect how he applies the law.

But the most important reason is that the site "As American As Apple Pie" carries a big old satire disclaimer at the bottom of the page:

So both these supposed pieces of sharia law are definitely not legal under U.S. law, unlike what the article claims.

A man who finds his Godly wife in the arms of another may beat her in a non-life-threatening manner as prescribed by the Koran. The punishment of death for laying with another man in her own bed cannot be enforced on American soil, but the woman can be beaten daily for a period of ten years.

A family in need of expansion shall allow the marriage of first cousins for one generation as prescribed by the Koran. Women in those families can marry as young as 9 but won't be allowed to consummate until they hit maturity as prescribed in the Koran.

Despite all this the story has been going viral in the past few hours as you can see in the Trendolizer graph at the end of this article. A competing fake news site has actually posted a story titled "BREAKING: MUSLIM JUDGE HALIM FOUND DEAD AT HIS HOME AT AGE 47. DO YOU STILL SUPPORT TRUMP?" which is just a copy of this one but with a different title that tries to pull a death hoax for a non-existent judge. What crazy times we live in...

If you notice any of these stories passing by in your newsfeed do take the time to comment with the link to this article because nobody likes being fooled by fake news.