Of course Jeff Bridges never said anything like that and the rest of the article never even mentions Jeff Bridges. It opens:

Every year, the Social Security Administration collects billions of dollars in taxes that it doesn't know who paid. Whenever employers send in W-2 forms that have Social Security numbers that don't match with anyone on record, the agency routes the paperwork to what's called the Earnings Suspense File, where it sits until people can prove the wages were theirs, allowing them to one day collect retirement benefits.

If that sounds familiar you are probably a reader of The Atlantic with a very good memory: in september of 2016 they published an article titled "The Truth About Undocumented Immigrants and Taxes" which opens with the exact three paragraphs making up the 'Jeff Bridges' article. The difference is that the article in The Atlantic goes on for several more paragraphs (but none of them mention Jeff Bridges either). 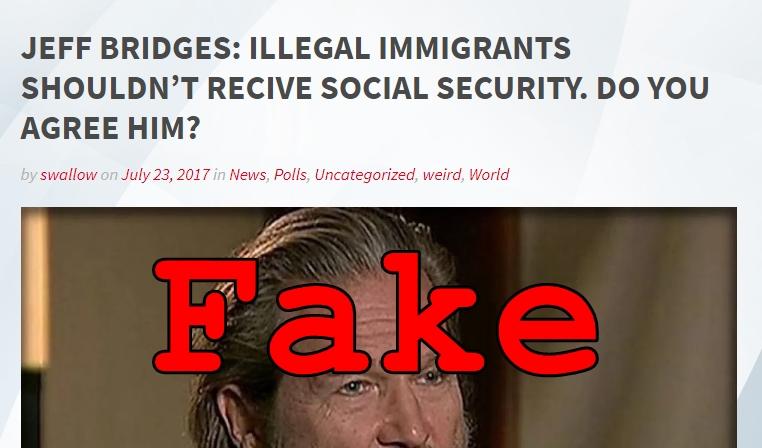 This hasn't been the first time Jeff Bridges has been used by fake news websites peddling a fake quote in a fake poll. The general tactic of sites like "Spinzon" or "American President Donald J. Trump" is to lure people to their webpage by any means possible and to then convince them to click literally anywhere on the page in order to make a few cents from the various popup ads that appear. These ads may even be harmful in some cases, prompting users to install various browser addons or fake antivirus software that will then take over the victim's computer to spam him or her with even more ads or to steal private data.

Don't fall for it, don't spread or click on fake polls like these. And if you see your friends spreading them, warn them by sending them over here. As you can see in the Trendolizer graph at the end of this article thousands of people have already fallen for this particular hoax.