The Muslim Mayor of Blairsville, a small suburb of Dearborn, Michigan, has declared by executive action that Christmas decorations, music or festivities of any kind in view of the public is "offensive to the majority of residents and therefore forbidden."

The town, with a population of nearly 120K people, is 52 percent Muslim as of the 2010 census and probably slightly higher since. The remaining residents are 3rd and 4th generation American families who have been living on family land or settling the area in general for 250 years, but their rights don't matter:

"According to the order, religious symbolism in view of the public is considered offensive. That includes Muslim and Jewish symbols. You won't find them anywhere either."

Sites from the same network of fake sites then followed up with two more false articles:

First of all there is no town named Blairsville anywhere in Michigan. It seems to be a reference to Christopher Blair, a.k.a. Busta Troll, a notorious liberal troll who runs several websites with outrageous fake news stories designed to trick gullible conservatives into sharing them. The link behind the name 'Art Tolbuls' in one of the followup stories points to one of Blair's Facebook profiles: https://www.facebook.com/TheRealBustaTroll/.

And the 'muslim mayor' depicted with the article is actually Mohammad Qatanani of the Islamic Center of Passaic County in New Jersey, who is currently involved in a deportation case for alleged membership of Hamas. 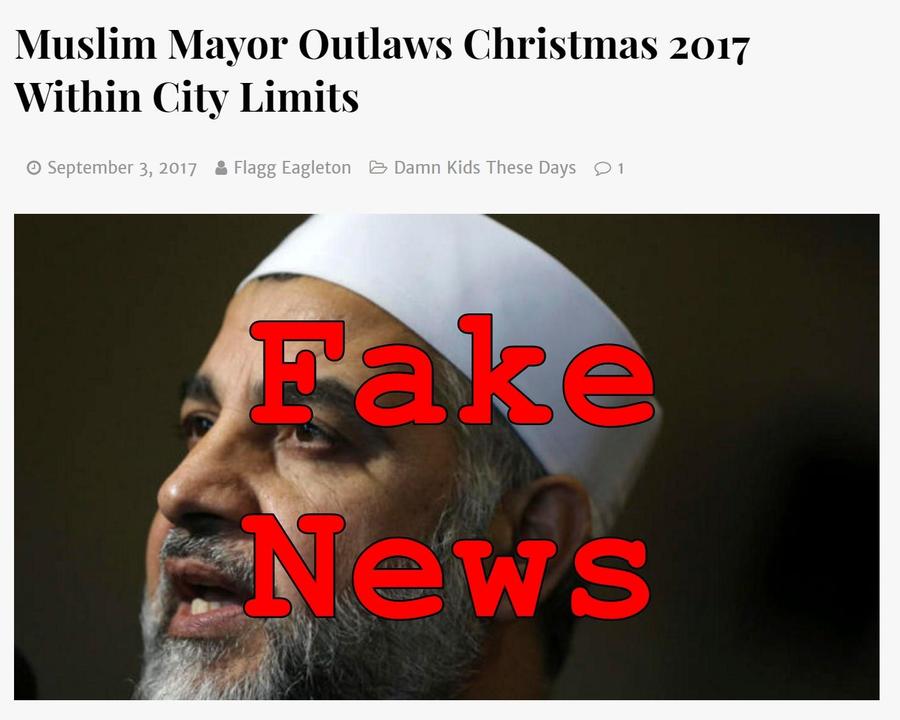 The picture used in the followup stories is actually of Nazir Ahmed, a member of the British House of Lords.

And of course there is a big, fat satire disclaimer at the bottom of the page:

The problem with Blair's work is that it is often copied by "real" fake news websites who then omit all hints that the work is satirical in nature. (Blair recently did get several such sites shut down, banned by some advertising networks or kicked off Facebook using copyright complaints.)

And sometimes he also uses photos of real people found on the internet as was recently the case with a story about a Texas mosque that allegedly refused to help Christian hurricane victims where an innocent Canadian imam suddenly found himself the center of attention.

So if you see anyone online sharing the story of the muslim mayor outlawing Christmas you can tell them they've been duped by a master troll.