ISIS has managed to infiltrate the Halls of Congress, according to a verified source inside the Justice Department. Two US Representatives, both Democrats, have been removed from the building and brought to a "secure facility for enemy combatants."

What that means, according to Sgt. Franklin Omalley at the Pentagon, is that two United States citizens have given up their rights for actions deemed hostile to the American public at large:

"From the limited information being fed to the NCO level, we can safely say that these two men aren't just sympathizers. They are full contributors who believe in and champion the cause. The NSA believes they are entrenched enough that suicide bombings inside the Capitol may have been on the table."
The two men, Rep Harold Somersworth of Maryland's 43rd district and Rep Omar Sali of New Jersey's 112th, will face a trial if they are deemed to be within their rights as citizens to habeas corpus. If not, which is completely up to President Trump and the NSA, they will be sent to a holding facility as prisoners of war until terrorism is defeated.

The network of fake news websites that The Last Line of Defense is part of has really been on a roll lately, with two major fake stories that managed to spread far and wide in the past week: the the Texas mosque that refused to help Harvey victims and the muslim mayor that banned Christmas.

Of course this story is fake too: Maryland only has eight congressional districts and New Jersey currently has twelve. Rep Harold Somersworth and Rep Omar Sali don't exist. The people in the arrest photo are ex Hoboken, NJ mayor Peter Cammarano (a democrat who was arrested for corruption) and John Walker of Little Rock, AR (a lawyer who was arrested for filming a traffic stop). 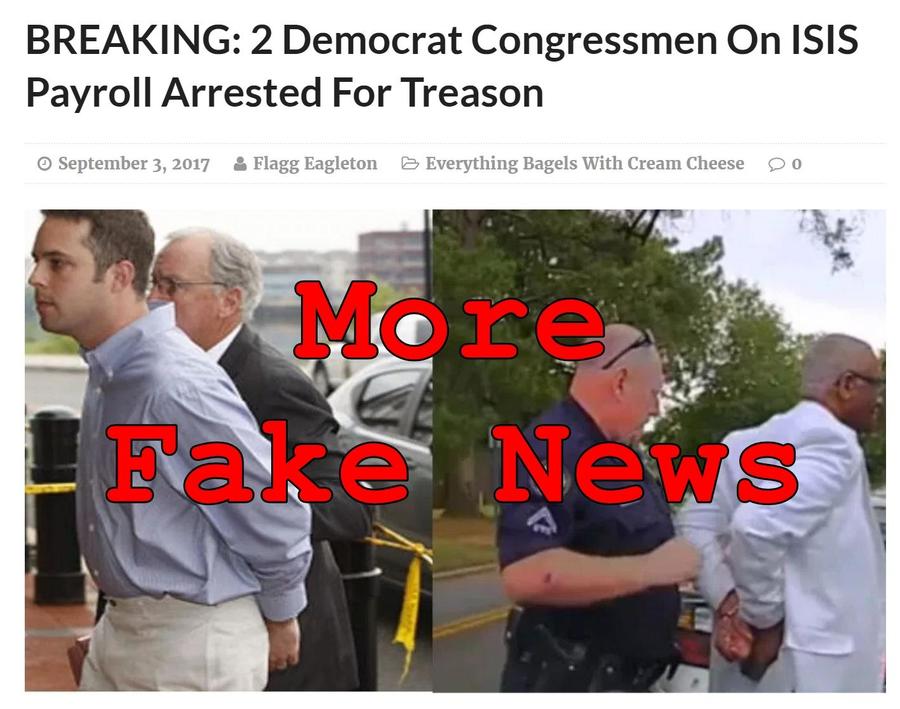 And if that doesn't convince you, maybe the disclaimer at the bottom of the article will:

So don't fall for this fake news story either, and warn the people who are spreading it online they have been fooled by a master troll.