An Obama-appointed judge on the 26th circuit has used the catastrophic flooding of Harvey and Irma to allow tenets of Sharia Law to be practiced right here on American soil. According to judge Marie al Salam al Salami, areas affected by catastrophic flooding that have no contact with the outside are within their legal rights to rule as sovereign entities, instituting whatever laws they deem necessary, including religious law.

So...the Christians will love thy neighbor, the Buddhists and Hindus will love everything and the Muslims will beat their women for not properly covering themselves and murder their neighbor's entire family because a boy peeped at a woman through a telescope. There have been reports of children being tortured for stealing food to feed their families.

The article was accompanied by an image with following caption under it:

Marie al Salam al Salami has an American flag in her office with a Muslim crescent moon where the stars should be. 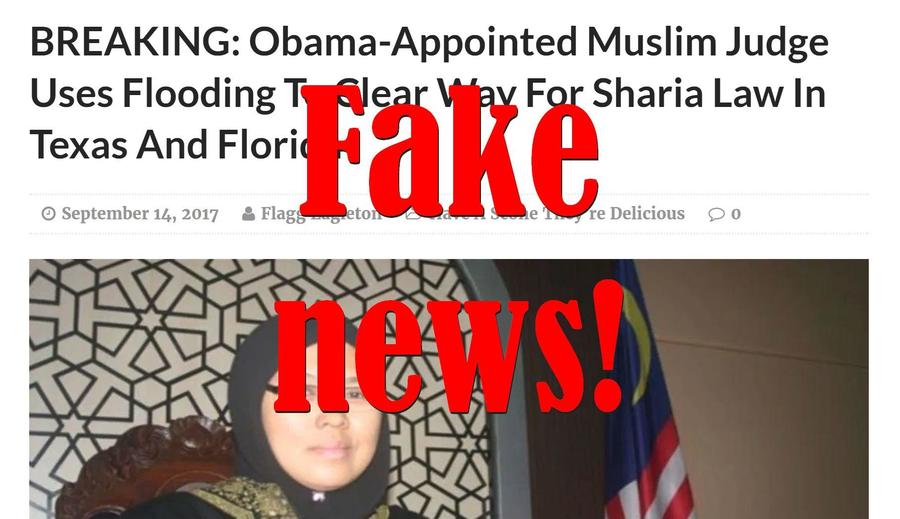 There is no judge "Marie al Salam al Salami" and the flag in the picture is actually the Malaysian flag:

The woman in the picture is Nenney Shushaidah Binti Shamsuddin, an actual shariah court judge in Malaysia.

So if you saw the story on another site or even if you just encountered it on social media, there is no need to get upset about it. Tell your friends who might believe the story it is actually fake. We've already spotted at least one person on Twitter who was fooled by it: