An article titled "European Union Voting To Lower Age Of Consent To 13" was posted to conspiracy/fake news website YourNewsWire. It is a near identical copy of an article titled "BELGIUM PARLIAMENT TO LOWER AGE OF CONSENT TO 13" which was posted to satirical website World News Daily Report. The first article opened:

The European Parliament will vote this week on a motion which could lower the legal age of sexual consent from 16 to 13 years of age across the European Union.

Laurent Henry proposed the motion which "could free thousands of unjustly convicted prisoners" if the parliament decides to pass it.

"Our prisons are filled with young men that have been robbed of their youth, condemned to rot in jail for an act that should not be a crime. Why are we denying these young men the chance to play a more positive role in modern society?", he said before the assembly Tuesday.

"Some even argue that a law on the age of consent has become superfluous and should no longer exist."

While the second one began:

Brussels | The Belgian Federal Parliament will vote this week on a motion which could lower the legal age of sexual consent from 16 to 13 years of age.

Laurent Cassius, member of the opposition, proposed the motion which "could free thousands of unjustly convicted prisoners" if the assembly decides to pass it.

"Our prisons are filled with young men that have been robbed of their youth, condemned to rot in jail for an act that should not be a crime. Why are we denying these young men the chance to play a more positive role in modern society?", he asked before the assembly tuesday.

The exact same quotes, attributed to two different politicians, in two entirely different political bodies. Also there is no record of a "Laurent Henri" on the website of the European Parliament, and "Laurent Cassius" is not a member of the Belgian federal parliament. So the story is definitely 100% fake. 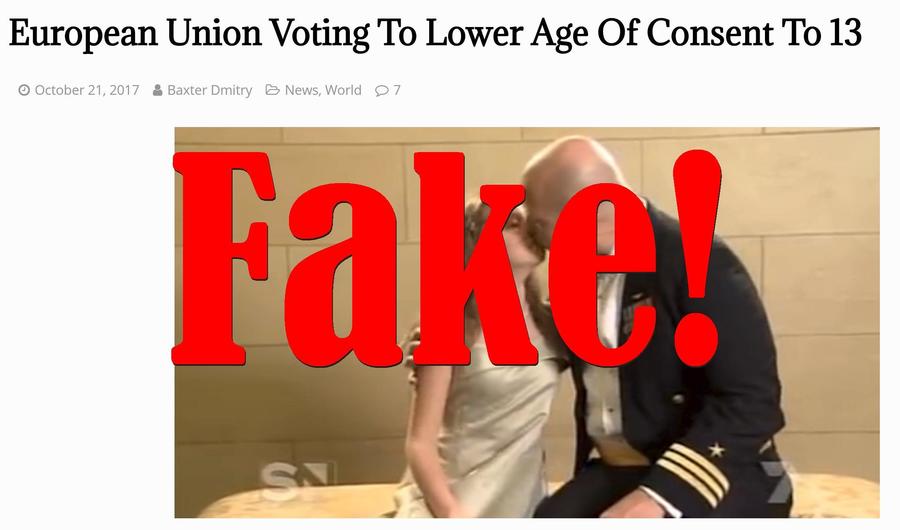 Note that the picture being used with the story apparently isn't even related to Europe. It looks like it was taken from a gallery of images in an article about "Father-daughter christian purity balls" in the USA.

For more information on the actual age of consent in various European countries, see this wikipedia article, which notes:

Neither the European Union nor the Council of Europe have suggested any specific age of consent, and there has not been any effort so far to standardize the age across member states. However, most countries in Europe now have binding legal obligations in regard to the sexual abuse of children under 18. The Lanzarote Convention,[2] which came into effect in 2011, obligates the countries that ratify it to criminalize certain acts concerning children under 18, such as the involvement of such children in prostitution and pornography. Other acts that must be criminalized include:

"Engaging in sexual activities with a child (child is defined in Article 3 as "person under the age of 18 years") where:

The age of consent is called "the legal age for sexual activities" and must be chosen by states at the age they see fit. (No specific age is recommended.) As of December 2016, the convention has been ratified by 42 states, while another 5 states have signed but not yet ratified the convention.[3]

The website World News Daily Report which originated the "Belgium" version of the story is a well known website specialized in posting hoaxes and made up stories. The disclaimer on their website is pretty clear about that even though you have to scroll all the way down the page to find it:

But that didn't matter to the people who published the article at YourNewsWire. They apparently chose to copy and modify an article from a satirical website and then tried to pass it off as real news. Unsurprisingly YourNewsWire has published several hoaxes and fake news articles in the past so anything they put out should be taken with a very large grain of salt.