An article titled "Kentucky Governor Bevin: 'State employees are bankrupting the state"' was posted to prank website React365. It opened:

This morning, Kentucky Governor Matt Bevin held a live session on his Facebook page detailing his proposal to change Kentucky state employee pension plans. As a part of the new framework he outlined, new employees will be placed in a 401K pension plan but current employees will remain in the pension plan. "We are keeping the promise of the pension" Bevin said. However the governor offered no outline as a way to pay for the current unfunded liability within the Kentucky Retirement System which is estimated to be over $30 billion dollars. When asked about paying for the unfunded liability and retiree defined benefit pensions, Bevin said "we will do our best to make sure the funds are there for our retirees."

Bevin repeated his comments that state employees have "gamed the system for far too long" by not retiring at the end of their 27 years of service. "Teachers continue to hoard sick days in order to have a higher pension. Those days are over."

According to the Washington Times Bevin did make comments in an interview about hoarding sick days:

In an interview on WVLK radio, Bevin questioned why state workers were allowed to "hoard" unused sick days and use them to boost their salaries to qualify for a more lucrative retirement check. He also questioned if state workers should be allowed to purchase service time, allowing them to retire faster.
"I don't think most people out there fully understand the way to which people have the ability to game the system," Bevin said. "Now, some don't, and I'm grateful for those who don't. But some do. Should it even be possible for people to play games and stick it to the taxpayer?"

But we have been unable to find the quote attributed to him in the title of the article that claimed state employees are bankrupting the state and the body of the article doesn't contain that quote either. So we are going to rate it false. 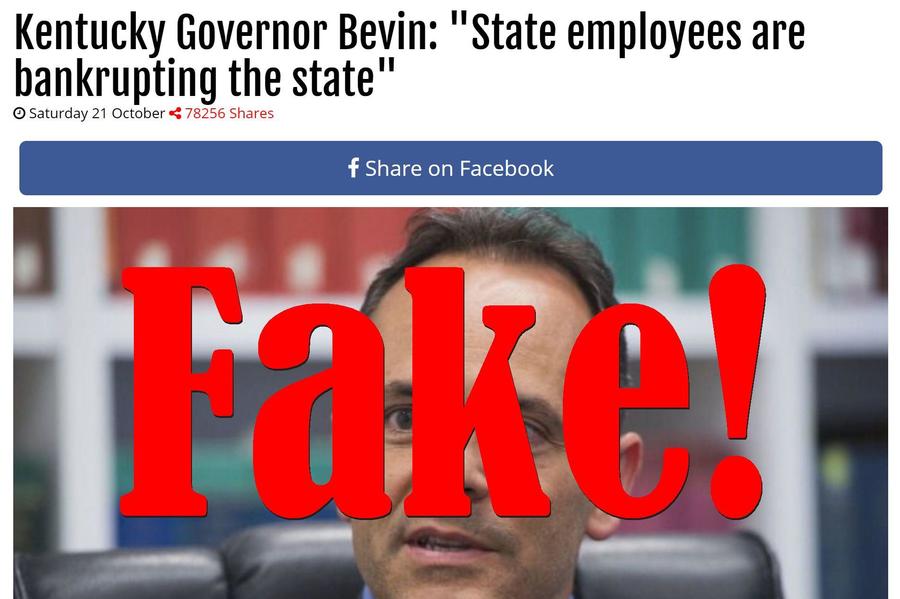 React365 is a prank website where users can submit their own headline, description and photo to create realistic looking prank news articles. Apparently someone used it to create a longer than usual (for the site) political news article, likely in an effort to later use it for political purposes.

The disclaimer at the bottom of the site reads:

ABOUT
This website is an entertainment website, news are created by users. These are humourous news, fantasy, fictional, that should not be seriously taken or as a source of information.

On those grounds alone you should be very suspicious of whatever you read on the site.

Here are some of the previous pranks and hoaxes that we debunked from that site.