It's official: Democrat hero Bill de Blasio has been "re-elected" as mayor of New York City. And as with all other Democrat victories, it's looking like the Mayor cheated.

At 5:47 P.M. Eastern, Fox News projected New York state Assemblywoman Nicole Malliotakis as the clear winner with a 19-point lead. But when the polls closed, de Blasio had cruised ahead to 65% compared to Malliotakis' 29.1%.

This was shocking to many, but to none as much as New Yorkers who voted for Malliotakis only to see de Blasio's name on the printout.

"I don't know what happened. I voted for Nicole, but this thing says I voted for Bill," New York City resident Trebianca Jenkins told the New York Times.

All quotes in the article are fake and the links to 'official' news websites like the New York Times or The Blaze supposedly about the fraud just go to general pages, not to individual articles. The only real thing in the story is the link to the article with the election results which do show a 66.5% victory for de Blasio.

Several other fake news sites have already copied the article but with one important omission:

Reagan Was Right carries a satire disclaimer at the bottom of the page which reads:

Our mission is to provide a safe haven from reality for those who truly just don't know the difference. There is zero truth to anything on this site. 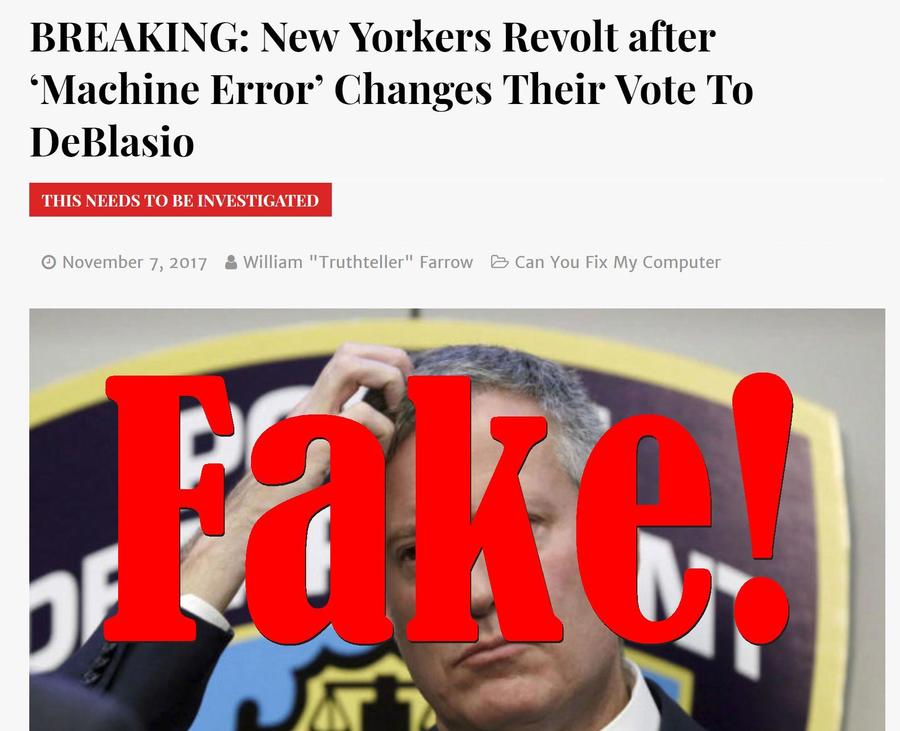 Also, the category the article was posted under was labeled "Can You Fix My Computer" if you needed more hints that the story was satirical in nature.

The owner and main writer of the site is self-professed liberal troll Christopher Blair, a man from Maine who has made it his full time job to troll gullible conservatives and Trump supporters into liking and sharing his articles. He runs several other websites such as ourlandofthefree.com and thelastlineofdefense.online (formerly thelastlineofdefense.org). Sometimes he is also known under his nickname "Busta Troll". He has at least one accomplice who writes under the pen names "Freedom", "Captain Jellypants", "Butch Mannington" or "Captain Buck Atlantis".