Recently an article titled "Obsessed Ex-Girlfriend Couldn't Move on after the Break up, Bombards Ex-Boyfriend with 27,600 Calls in a Week" started trending on a site named Buzzflare.com. It opened:

Breakups can be hard, painful and ugly but one thing is for sure, when a person came from a bad breakup, they should move on and accept the fact that the chapter of your life with your partner is over.

Kelly Murphy, 28, of Alberta was arrested for obsessing over her ex-boyfriend, Randy Williams. Aside from calling him about 27,639 times in one week, she also sent him 937 emails, 11,229 text messages, 117 sung messages, and 47 letters in the same period. This is insane!

She used almost eight phones at once to call him on his cell phone, home phone, workplace phone. I wonder how hard it is to work and do these things every day.

The story mentions "The Coverage" as its source, and indeed, in an article titled "Woman Arrested For Calling Ex-Boyfriend More Than 27,000 Times in A Week! He Almost Gone Into Depression!" we find almost the same claims:

Kelly Murphy, 28-year old, has been bugging her ex-boyfriend, Randy Williams nonstop for one whole week! Randy almost got into depression due to her. Not only she called him 27,639 times in a week, but also sent but also sent him 937 emails, 11,229 text messages, 117 sung messages and 47 letters in the same period. That's insanely a lot! 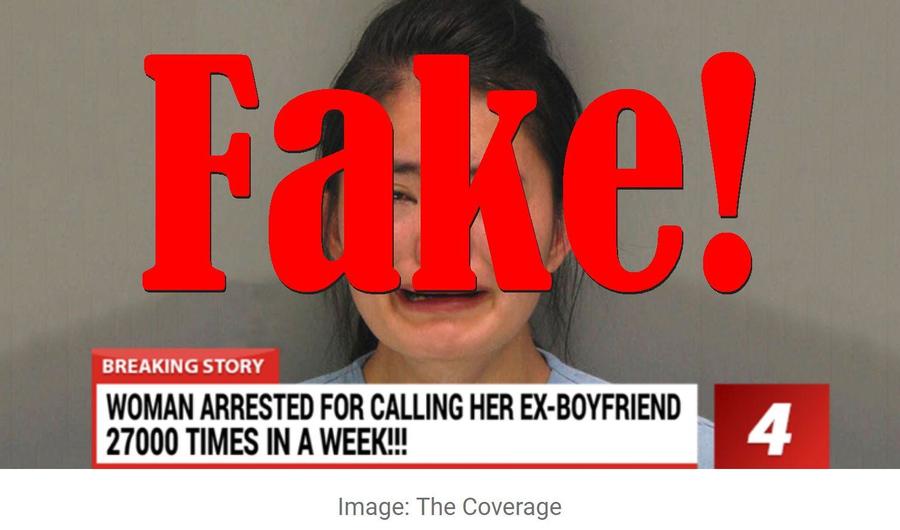 The image used with the story seems to be based on an image from a "people crying in mugshots" listicle that has been copied all over the internet. We found dozens of copies from as early as 2011.

It would be physically impossible to make that many calls in a week. Let's round to 27,000 calls. That would be a hair over 3857 calls per day. Or about 160 calls per hour. Or three per minute (assuming no time for sleeping, eating and bodily functions). And during the same time she would also have been busy sending 937 emails, 11,229 text messages, 117 sung messages and 47 letters. Nobody can pull that off, not even with eight phones and using energy drinks and amphetamines (as the article claims).

Furthermore The Coverage states on its about page:

The Coverage is a social news network based in Malaysia, covering all manner of viral stories and interesting content from around the web.

We believe that content should not be all serious, and therefore our stories are usually as interesting as possible, to give you an entertaining alternate view of current events.

"Not all serious". "Entertaining". "Alternative view". Not really phrases one associates with a real news source. So if you came across this story via one of the dozens of "viral" sites that copied it without giving credit to the source you now know it originated on a Malaysinan entertainment website, not a real news organisation. don't be fooled!