The satirically named website nofakenews.online published a story titled "Give Thanks: Hillary Clinton Is Dead". It opened:

Hillary Clinton made it easy for patriots across the country to list what they're thankful for during dinner today by dying first thing this morning. Clinton, 73, was pronounced dead in the backyard of her Chappaqua home.

Authorities are denying press any access to the medical examiner or the Clinton family. Officially, she is alive and well, but LLOD correspondent Skip Tetheluda says that's not the case:

"We have someone camped out near the Clinton compound at all times. This morning, Hillary walked outside, took a sip of cofee and dropped dead. Nobody was around so the spotter actually called 911. He stayed and watched as she was covered in a sheet and put on a stretcher. The picture you see is likely the only one in existence."

Of course none of it is true. The image is actually from Texas and was taken on April 19th 2017 in Houston, where a dead body was found on a sidewalk. 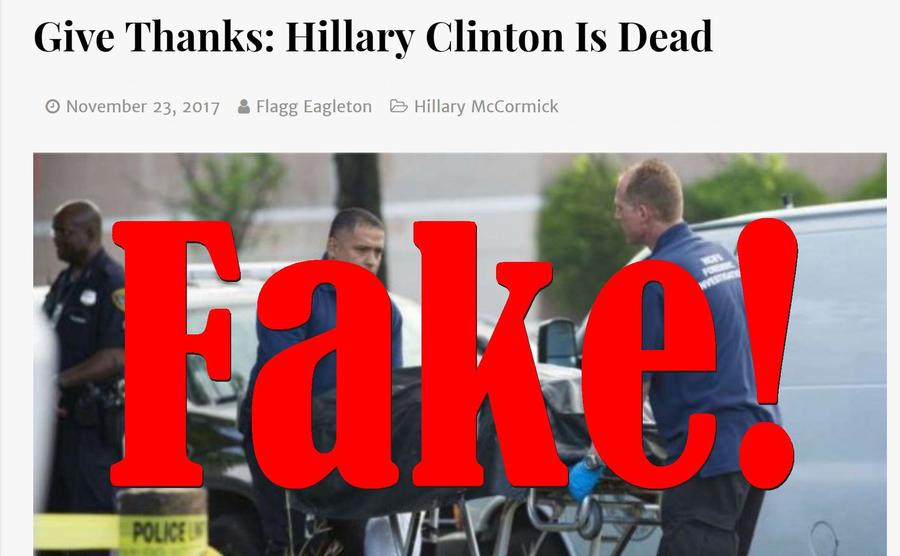 The site carries a disclaimer at the bottom which states:

It is part of a larger network of sites all owned and operated by Christopher Blair, a self-professed liberal troll from Maine who has made it his full time job to troll gullible conservatives and Trump supporters into liking and sharing his articles. He has put out several Hillary Clinton death hoaxes in the past going so far as to publish one every Saturday for months at a time.

Sometimes he is also known under his nickname "Busta Troll" but many pen names are used on his websites, such as "Flagg Eagleton", "Freedom", "Captain Jellypants", "Butch Mannington" or "Captain Buck Atlantis". His network of sites currently consists of:

Because of periodic bans by Facebook sites in the network sometimes forcibly change their name and address. We've looked at a few older inactive Blair sites and it looks like some of them will shortly be renamed and relaunched too: they already sport new designs and disclaimers but have no articles yet. Lead Stories will keep you posted if any of that changes.

Articles from Blair's sites frequently get copied by "real" fake news sites who often omit the satire disclaimers and any other hints the stories are fake. Blair has tried to get these sites shut down in the past but new ones keep cropping up.

If you are unsure if a story you see is true and you Google the title before sharing it (good on you): if you see any of the above sites pop up in the search results you know you've found a fake news story.