An email from the Alabama Secretary of State to the Roy Moore campaign has been leaked to the Associated Press. A staffer in the main newsroom told our reporter in the field that they should have the second verification they need to release the news by 10 AM Friday that Roy Moore has won the Alabama special election.

The news, which will come as a shock to many, is exactly what Moore was expecting once the votes of American patriots in the military came in and the reason why he refused to concede the race to Jones.

Obviously the story is not true because Potatriot Post comes with a clear satire disclaimer at the bottom of each article: 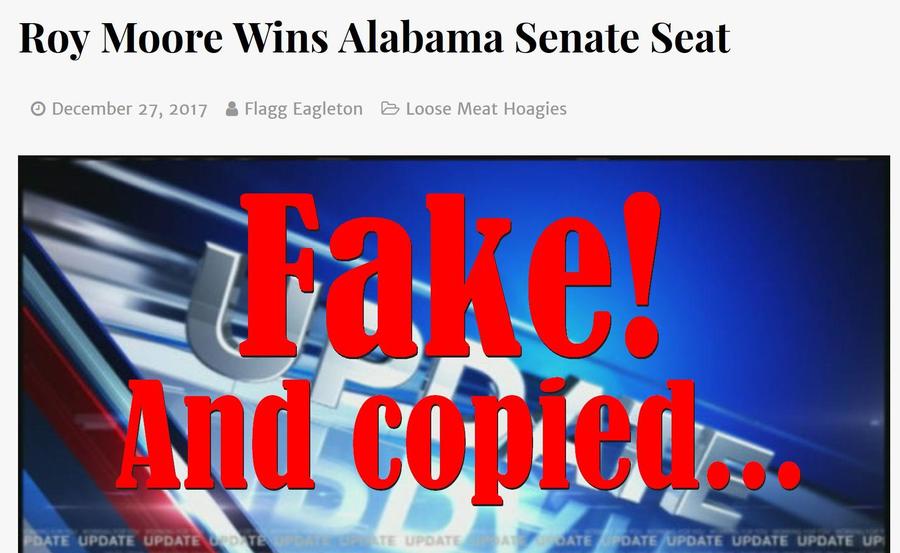 But the article was later stolen (archived here) by a "real" fake news website by the name of "patriotunited.club" which is part of a network of sites that regularily steal content from other sites. And they didn't include the satire disclaimer. We've identified following sites as being part of the network but there may be more of them:

All these sites seem to have the same content and it appears their domain names have all been registered anonymously over the past few weeks and months, likely in an attempt to evade blocking/filtering measures by social media networks. It also appears the sites are using the CloudFlare CDN to mask their true IP address (ironically enough this causes politicstraight.club to share two IP addresses with fact checking site hoax-slayer.net, namely 104.18.56.184 and 104.18.57.184, but this is purely a coincidence).

We are wondering if the people behind the network realize the danger they are in: Potatriot Post is owned by self-professed liberal troll Christopher Blair, a man from Maine who has made it his full time job to troll gullible conservatives and Trump supporters into liking and sharing his articles. He runs several similar websites and is also known under the nickname "Busta Troll".

Articles from Blair's sites frequently get copied by "real" fake news sites who often omit the satire disclaimer and any other hints the stories are fake. Blair has tried to get these sites shut down in the past but new ones keep cropping up. Recently he managed to get a network of Macedonian fake news sites shut down, including a site named "Conservative Stamp" that was stealing his articles and getting more likes/shares out of them in some cases.

We here at Lead Stories are curious to find out if Christopher Blair will manage to find Cloudflare's abuse form and the "DMCA" option that is cleverly hidden in one of the dropdown options there. Or will the fake news network's ruse of using Cloudflare to protect themselves manage to throw Busta Troll off their scent?