Several fake news sites all came out with copies of the same article, all titled something like "Trump Orders to Remove Obama Highway Name and Get Back The Previous Name of `Old Dixie' Highway". Here are several examples:

Sometimes most of us rush to disregard the importance of names. With so many new things being created every day, things of the past can be perceived as "less relevant". But, it's for this same reason that names also have one valuable role. They allow us to preserve our legacy and heritage.

Over the last few months, we have heard how liberals have tried to desecrate the history of our ancestors by trying to remove Confederate monuments from our cities. Now they are going a step further and they are trying to remove the name "Dixie" from our history.

(Old Dixie) Highway located in Riviera Beach, Florida is officially being renamed as "President Barack Obama Highway". The change was decided after city officials concluded the old name was "racist and offensive". They believe that by changing it to "Obama", they will get a clean slate on history.

"(The street is) symbolic of racism, symbolic of the clan, symbolic of cross burnings and today we are stepping up to a new day, a new era," said the mayor of Riviera Beach.

The second part seems to contradict the title and that is because it is most likely copy-pasted from a real 2015 news article (which we were unable to locate) about the original name change. Here is a different news article about the same events from the period, from the Florida SunSentinel. 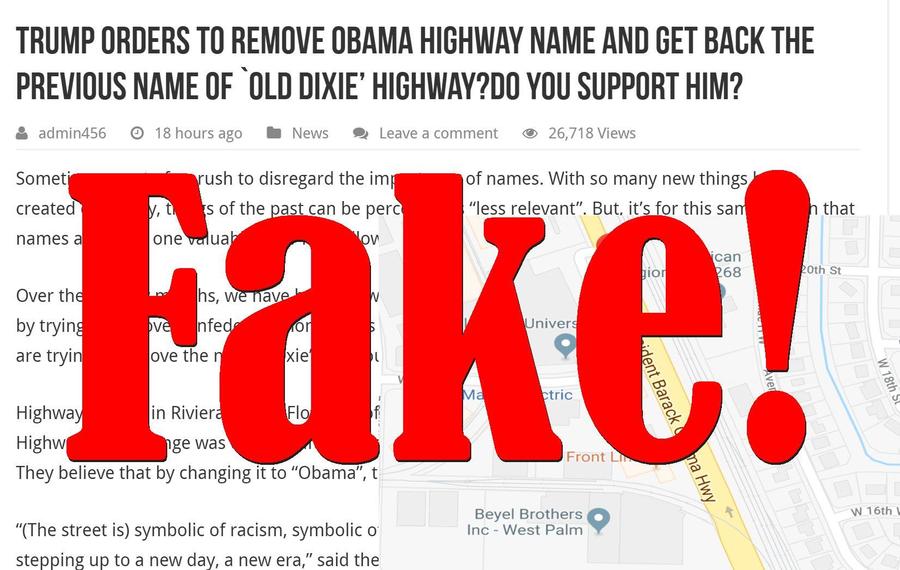 President Donald Trump has made no efforts or comments about changing the name back and no mainstream news websites have reported on any such efforts or comments. The White House website has no info about it, and neither does President Trump's twitter account. And as you can see for yourself in Google Maps the President Barack Obama Highway is still named just that.

The stories all seem to originate from relatively new websites launched at most a few months ago that try to bait conservatives and Trump supporters into liking and sharing their content so they can make money off the advertising. This particular hoax probably works especially well because it plays on the preconceptions and assumptions of both sides: one side sees this as a confirmation that Trump is "defending our heritage" while the other can see it as a confirmation that Trump "is a racist supporter of the Confederacy". In this case both are wrong.