A room full of servers and hard drives was destroyed in the Clinton house fire in Chappaqua, New York, on Wednesday, according to a Chappaqua Fire Department source, raising fears that incriminating evidence against the Clintons has been destroyed just days after a White House insider warned that Trump was preparing to prosecute their crimes.

"I saw smashed up hard drives, melted memory cards and the charred remains of paper scattered all over the room and immediately knew the fire must have started there," a Chappaqua Fire Department source told local news reporters, explaining that the house fire was "put out by Secret Service agents" before the Fire Department arrived.

The story fails to identify the "local news reporters" and lists no name for the "Fire Department source". The image of the "burned server" used to illustrate the story actually comes from the website of KrollOntrack, a company advertising data recovery services (including from fire-damaged computers). An actual news report from local news source lohud.com makes no mention of servers or papers and indicates the fire wasn't even in the actual Clinton house:

The fire was put out by fire extinguishers, and firefighters inspected the area to ensure it was completely out, the Secret Service said.

So it is pretty safe to say the story about the servers and the hard drives is a hoax, especially given the reputation of YourNewsWire. The site has published several hoaxes and fake news articles in the past so anything they write or publish should be taken with a large grain of salt.

Their articles are often copied by other fake news sites or conspiracy-related Youtube channels, in many cases without proper attribution. 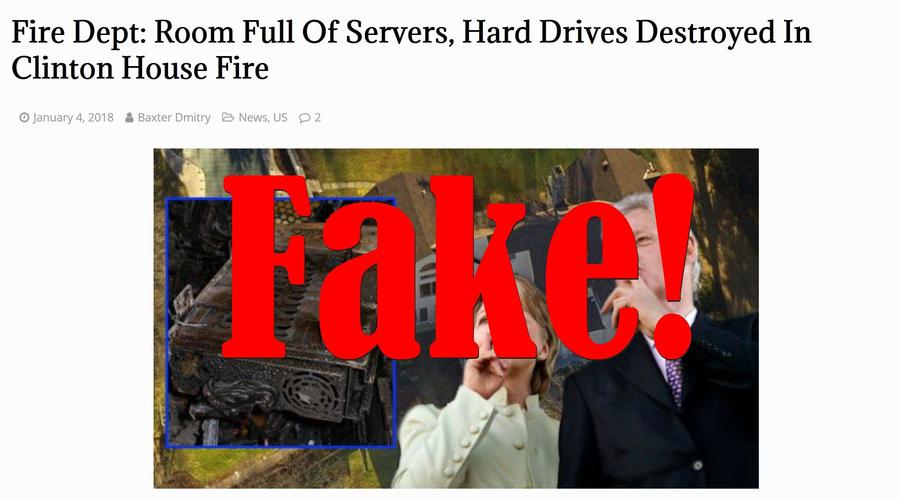