You may have read the incredible story about Darrell Waterford from Eugene, Oregon, a 21-year old Greenpeace activist who supposedly got his arm bitten off by a shark somewhere in the waters of the Indian Ocean about 100 miles from Perth. It is all fake and none of it happened for real.

The story originated on satirical website World News Daily Report where it was posted under the title "Greenpeace activist gets arm bitten off after hugging a white shark" (archive here). The article opened:

An environmental activist was almost killed Yesterday in the Indian Ocean, after the great white shark he was trying to hug suddenly attacked him and bit his arm off.

21-year old Darrell Waterford, from Eugene in Oregon, was participating in a promotional video for Greenpeace, some 100 nautical miles away from the Australian city of Perth.

It goes on to describe the shooting of the promo video, with Mr. Waterford supposedly swimming with a group of sharks for about half an hour. Then the incident happened:

Unfortunately for the young American, one of the sharks suddenly became aggressive after being hugged and suddenly attacked him.

It attacked Mr. Waterford and tore off his right arm right below the elbow. The young man lost a large amount of blood, but was able to get out of the water and was rapidly taken to the hospital.

The story also mentions one "Huei Li Chong", the leader of the expedition, who supposedly spoke to the Australian Broadcasting Corporation to describe what happened. We were unable to locate any trace of such an interview taking place.

Furthermore the picture of the man in a hospital bed that was used to illustrate the story is actually from 2012 and shows Kaleb "Fred" Langdale who was the victim of an alligator attack in Florida. The "Huei Li Chong" picture is actually a real Greenpeace activist but his name is "Tom Wang" according to the website of Greenpeace. 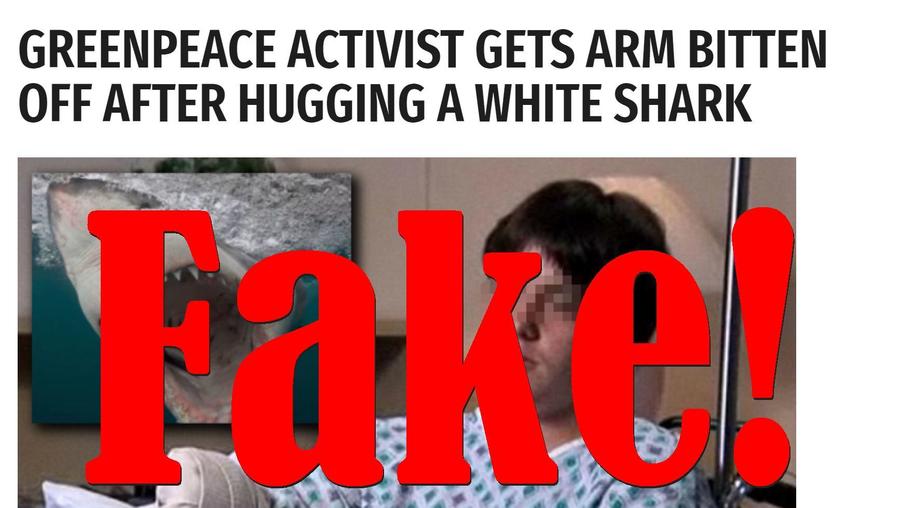 Stories from the site frequently get copied by fake news websites omitting the satire disclaimer and presenting the article as something that really happened. In this case that hasn't happened yet and the article also hasn't been contradicted by other fact checking sites like Snopes yet but we expect that to happen shortly. Personally we think sites copying stories from other websites should at least have the decency to put in a link to the original source. What do you think?