An article with the higly misleading title ACLU Complains: "Trump Used the Word 'America' More Than 80 Times" was posted on the website CNSNews.com (archived here) shortly after President Trump delivered his first State of the Union speech. The article opened:

(CNSNews.com) - The American Civil Liberties Union -- note the word "American" in its title -- complained Tuesday night about President Trump's repeated use of the word "America" in his State of the Union speech.

The full text of the State of the Union speech delivered by President Trump can be read here and if you include its use in words like "American" and "Americans" the word "America" does indeed seem to appear about eighty times (far less if you only count the word "America" by itself, about fifteen times in that case). 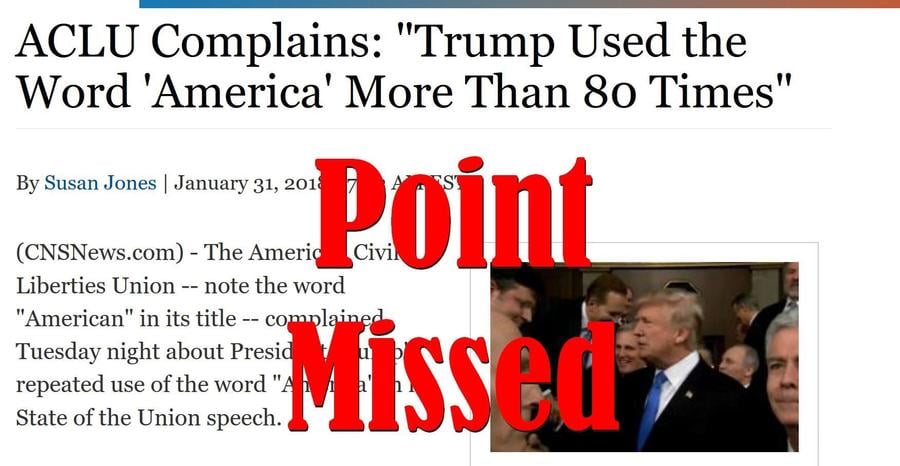 But the ACLU was not complaining about that. A little further in the article there is a quote and a direct link to the entire statement from Faiz Shakir, national political director at the American Civil Liberties Union, which we reproduce below:

"Tonight, President Trump said the word 'America' more than 80 times in his speech. Yet, after a divisive first year, we hear and feel how exclusionary that 'America' is, with policies that have harmed so many vulnerable American communities. The ACLU stands ready to protect these communities, both in the courts and at the polls.

"In particular, the immigration plan put forth by Trump would hold Dreamers hostage to his demands for a harmful border wall and an even larger mass deportation force. We are at this crossroads because of the president's deeply destructive ideas fomented by his nativist allies and divisive rhetoric. We will continue to stand up for these young immigrants and ensure they continue to contribute to our country. We cannot let America's Dreamers be deported."

The complaint is clearly not about the number of times the word "America" was used but about "America" being "exclusionary" and policies harming "vulnerable American communities". The statement specifically mentions Trump's immigration plan as one of the policies it is complaining about.

So we are going to rate this claim as mostly false while at the same time also frowning at the ACLU for sloppy word counting.