Nope, a funeral home worker in Huntersville, North Carolina by the name of Kenneth Brooks was not accidentally cremated after taking a nap on a stretcher. This fake story keeps coming back alive even after being repeatedly cremated by fact checking websites.

The latest instance of the story was published on March 11th 2108 on abcnews-us.com (not the real ABCNews website abcnews.go.com) under the title "Funeral Home Employee Cremated By Mistake While Taking A Nap" (archived here). That version of the story opened:

Huntersville, North Carolina | An employee of a local Huntersville funeral home died this morning, after being accidentally cremated by one of his coworkers.

According to the Huntersville medical examiner, 48-year old Kenneth Brooks decided to take a nap on a stretcher after working for sixteen hours straight.

While he was sleeping, another employee mistook him for the corpse of a 52-year old car accident victim and carried him to the crematory.
Before anyone could notice the mistake, he had already been exposed to temperatures ranging between 1400 to 1800 degrees Fahrenheit and reduced to ashes.

The original March 2017 fake story was about a "Morgue employee" while a later version on an African site spoke of a "Mortuary employee". If the pattern continues we expect to see a "Funeral parlor employee", "Crematory employee" or even "Charnel house employee" story in the near future. 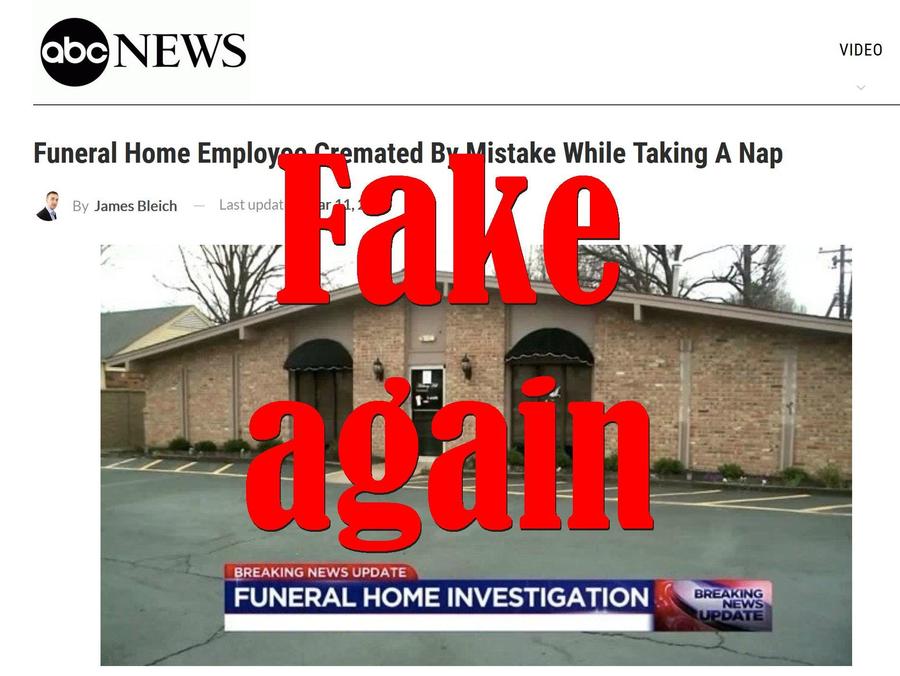 The website World News Daily Report which launched the original story is a well known satire website specialized in posting hoaxes and made up stories. The disclaimer on their website is pretty clear about that even though you have to scroll all the way down the page to find it:

It is run by Janick Murray-Hall and Olivier Legault, who also run the satirical Journal de Mourréal, a satirical site spoofing the (real) Journal de Montéal. His articles are frequently copied by other fake news sites as you can see.