Did truckloads full of illegal immigrants cast fake votes in the Pennsylvania election for the 18th Congressional District? And did this invalidate Conor Lamb's narrow win over Rick Saccone? We won't know 100% certain who won until after all questions about potential recounts have been settled but one thing we do know: the story about the trucks full of illegals is a hoax and is definitely not true.

The race for Pennsylvania's 18th district was a close one, with Conor Lamb being declared the victor before write-in and absentee ballots had even been counted. The fact that Lamb "won" even in deep red areas that support President Trump overwhelmingly, is suspicious on its own -- but reports of voter fraud make things even more peculiar (especially the trucks full of illegals).

Not only did Fox News report that verified instances of voter fraud are already popping up in the state, but Breitbart uncovered another very serious problem:

Locals captured photographs of what appears to be multiple trucks full of illegals at not one, not two, not even three, but six polling locations across Pennsylvania. All of the locations were in areas Trump dominated in the 2016 election.

At least one of the photographs allegedly taken by "locals" was in fact taken in Mexico in 2004.

The links to Fox and Breitbart in the story just went to the homepage of these sites and we were unable to find any actual news reports from these organisations about the alleged fraud by trucks full of illegals.

The story echoes two earlier stories coming from the same network of satirical websites: one about a "busload of blacks" and another about a "van full of illegals" improperly voting. The next story will undoubtedly feature a "trainload of illegals" or maybe a "passenger plane full of illegals"... 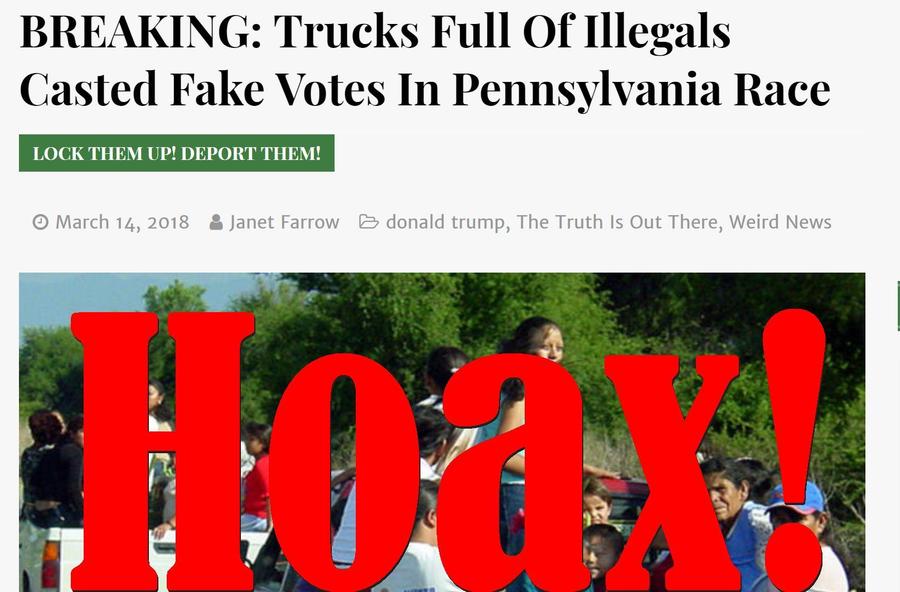