Did Kenyan ex-president Daniel Arap Moi really die in a hospital in Tel Aviv, Israel? The rumors that the 93-year-old former president died are not true. The "news" about Arap Moi passing away originated on a known fake news website that is part of a larger network which has made it a habit to publish death hoaxes about celebrities and international figures that have recently been reported by the media to be in hospital.

A statement from Moi's son, Gideon Moi, said: "My family joins me in sharing the difficult news that Mr. Daniel arap Moi, our beloved father, grandfather and great-grandfather has passed away on Tuesday at 93 years of age. His life was filled with love of God, his family and his country."

In a statement sent to newsrooms, from the former head of State's office also said Mr. Moi has died at a hospital in Tel Aviv after all efforts by medical staff to resuscitate him proved futile. However, the statement did not give details of the cause of death.

In fact Daniel Arap Moi is fine: it was reported by The Standard and other Kenyan media only hours ago that he was in Israel for a routine medical checkup and that he was responding well to treatment:

Former President Daniel arap Moi is responding positively to treatment in Tel Aviv hospital, Israel where he was flown for medical checkup on Sunday. The former President is in high spirits and expected home soon.

The former Head of State on Sunday March 11 morning left for Israel for a medical check-up. Moi, who was accompanied by his son Gideon Moi and personal physician Dr David Silverstein was booked at the Tel Aviv hospital. 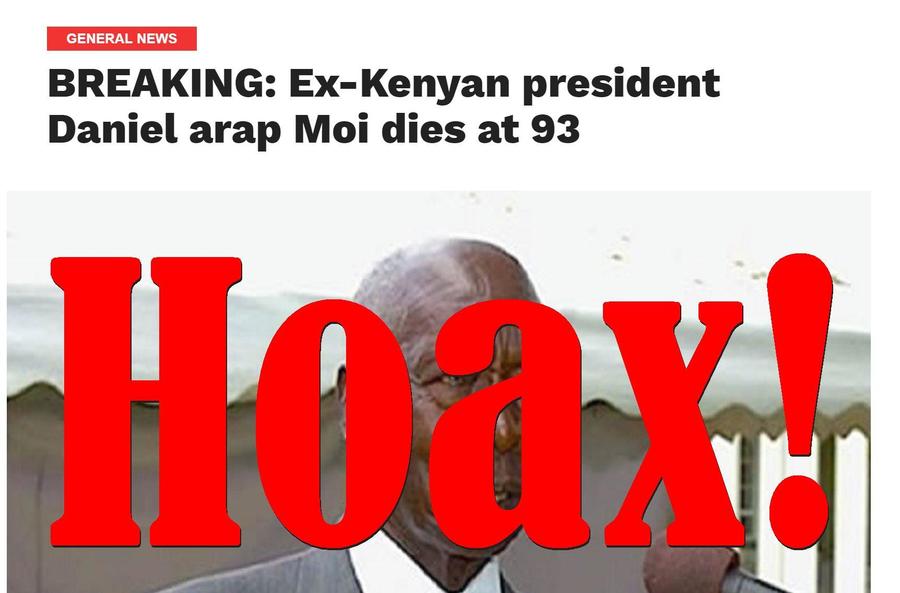 The website that published the death hoax is part of a larger network of sites that we wrote about earlier and which includes other sites like texas-express.com, miami-express.com, florida-times.com, abcnewgo.com and city-herald.com. Recently this network has been publishing a steady stream of death hoaxes about celebrities and well known people that have been reported by the media to be in hospital.

The sites are designed to look like normal news websites with stolen articles taken from legitimate publications listed on their front pages. Usually the fake news articles are not even visible there. Sceptical readers coming in via social media and stumbling upon the false articles about people passing away might be fooled into trusting the sites after seeing nothing unusual on the main page and after finding out through Google or other search engines that the person the article is about was indeed admitted to hospital just days ago.

It usually takes fact checking websites like Snopes a few days or more to get wind of hoaxes like these and during this window of opportunity the fake story can spread wildly. Don't be fooled!