If you have ever visited YouTube you may have noticed news articles are being stolen by shady YouTube channels uploading videos in which a robot voice reads out the text of an article over a slideshow of vaguely related photos. This is not a new phenomenon, it has been going on since at least 2015:

photo: Keltron There's something rotten on Youtube, and I'm not talking about PewDiePie. Not long ago the worst you'd come across would be the occasional 14 year-old boasting of unmentionable acts against your dear mother in the comments section of an Iggy Azalea video. Lately however, a new threat has risen.

The articles often come from mainstream news websites and some of these channels upload a new video automatically every few minutes. The people behind it are doing it because search engines like Google like to prioritize videos in their results, highlighting video results by showing a thumbnail image next to them (something which is not done for "normal" articles). Their end goal is likely to monetize the videos so they can profit from other people's work.

And it is not just regular news articles that are being stolen: fake news is being plagiarised too. And that's a problem, not just beause it is fake news but because it pushes down fact checks in the search results. Consider this example: 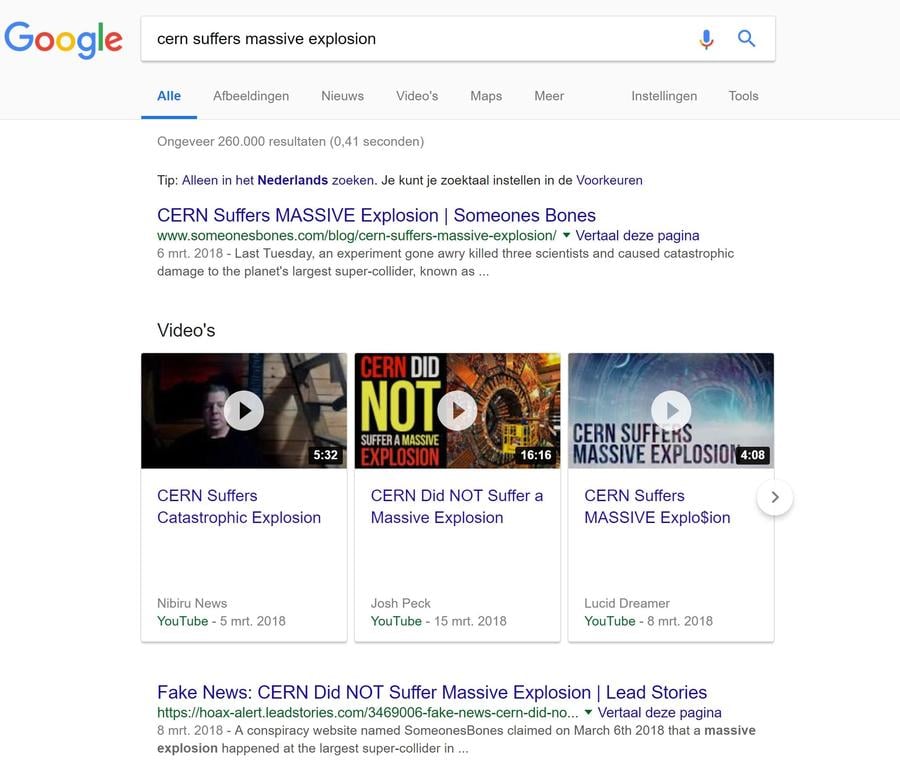 In this example we debunked a hoax about an explosion at CERN. The hoax article still gets the #1 spot in Google search results and our debunk is on the #2 spot. But it is almost completely obscured by video results either copying the hoax (bad) or debunking the hoax (good). In this particular example the debunking video actually is a guy reading the article he found on Lead Stories.

Another example is this hoax about a CDC doctor claiming a flu vaccine shot is the cause of a flu outbreak. In this case the videos plagiarising the hoax get better billing than the original hoax article: 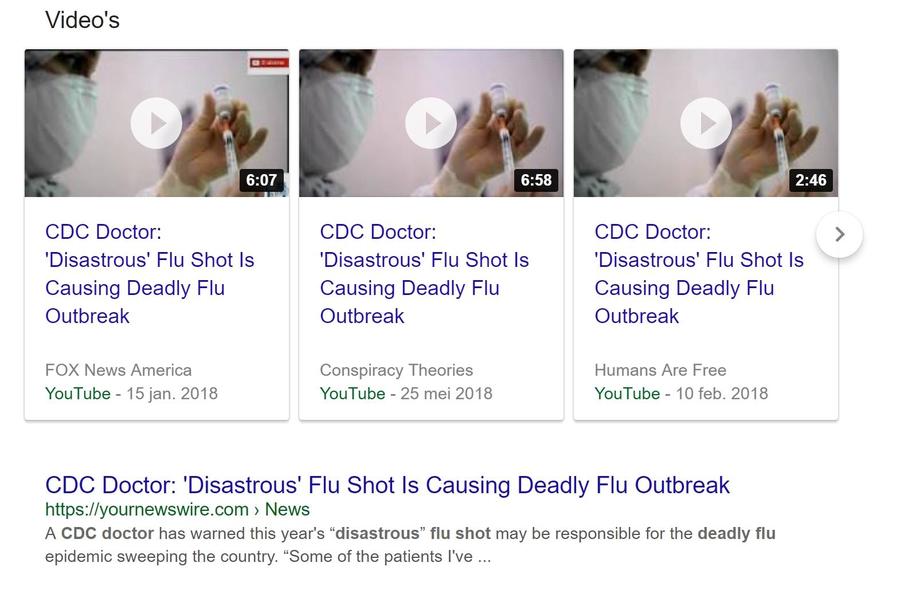 So we thought: why not cut out the middle man and use the spammer's tactics against them at the same time? Presenting the Lead Stories YouTube Channel, which we quietly launched about a month ago. 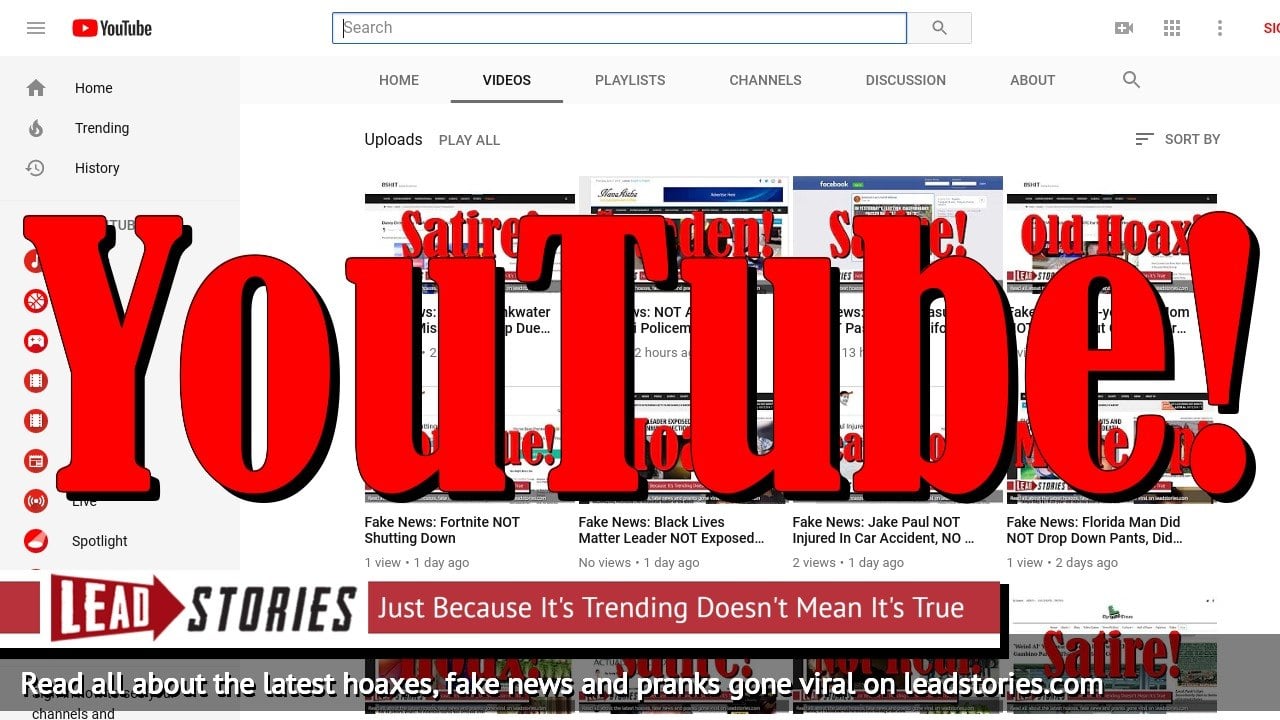 So, how does it work?

Every time we publish an article on Lead Stories a script on our webserver kicks into action and turns it into a video that gets automatically uploaded to YouTube. The videos always follow the same pattern, showing these images:

The images are animated through the use of several zooming, panning and scrolling effects. The videos are accompanied by a music soundtrack and a Google Wavenet voice reading out the text of our article. Technologies used to create the videos include a headless Chrome browser (for the screenshots), ImageMagick (for the image processing) and ffmpeg (for video processing and audio mixing).

The title and description of the video are taken from the article and include a link back to the full story on our own website.

And does it work? Yes indeed: 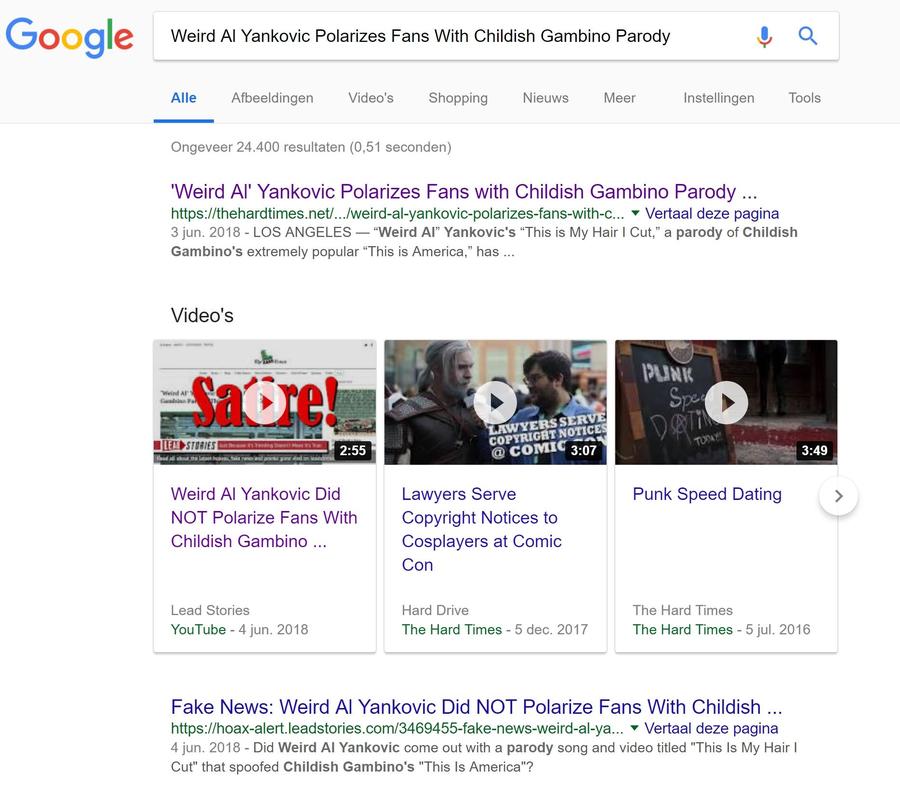 Not only do our videos show up, but because of the large, red captions we tend to use they immediately warn people searching for the hoax story that it might not actually be true, directly in the search results.

And it costs us nothing and we don't need to spend any time creating the videos. Sweet! So it is no problem some of the videos hardly get any views because nobody is searching the hoax on YouTube: it cost us nothing to produce it in the first place. But after only one month we already had several videos getting over 1000 views just from searches on YouTube alone. And that's without any active publicity.

Oh, right, one more thing, since we are YouTube stars now: please like and subscribe! (No, really, it will help our fact checking videos show higher in search results and related videos).