Recently a rash of new viral fake news stories started turning up on Facebook, all from sites associated with thefakenewsgenerator.com, a site run by a man named Justin Hook. He was profiled by The Daily Dot only a few days ago:

This fake news generator is a head-turning troll machine

Fake news is still a sensitive subject. Nearly 70 percent of people were concerned about the credibility of the news and where it comes from, according to a 2018 Edelman Trust Barometer, CNBC reports. People often expressed their concerns about fake news being used as a weapon to trick innocent people on the internet.

Here at Lead Stories we debunked several hoaxes being pushed by the site. On Twitter, Mr. hook even described himself as "the new fake news king":

The prank sites in the network all centered around thefakenewsgenerator.com where users could create a realistic looking fake news article to post to Facebook by using photos from Flickr and the optional use of pre-made headlines and summaries. The network also offered a selection of misleading domain names that could be used to make it look like an article came from real news websites such as CBS News, Associated Press or The New York Times. Each hoax article came with following disclaimer at the top of the page:

You clicked this fake news story. Now make your own!

But it seems like the reign of the new king of fake news is already at an end. Yesterday we noticed in our Trendolizer dashboard that no stories from the network were gaining any likes on Facebook at all. Closer investigation revealed that Facebook has marked all domain names associated with the prank generator as "spam" so it has become impossible to share stories from any of the sites on the social network anymore. Users trying to share a post that contains a link to any of the domain names used by the network are greeted by this message: 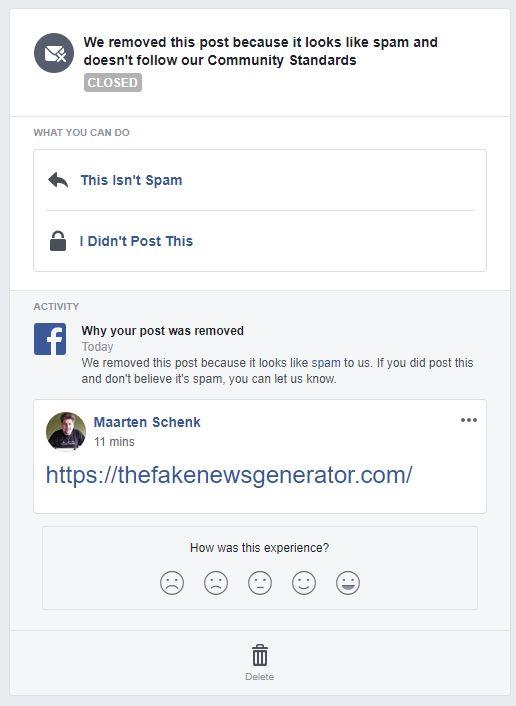 We reached out to Justin Hook for a comment and will update this post if we hear back from him.