Did Theresa May cancel the next general election in the U.K. because she doesn't think she will win? No, that's not true: the claim was made by a satire website mocking May's delay of a parliamentary vote on the Brexit deal but it is not real.

The story originated from an article published by NewsThump on December 11, 2018 titled "Theresa May cancels next general election because she doesn't think she'll win" (archived here) which opened:

Theresa May has taken the unprecedented step of cancelling the next general election after deciding that she does not have sufficient support to win the vote.

Having previously been confident that she could secure victory in the 2022 election, it has become clear over the last few days that the nation thinks she's an incompetent leading the nation into an inevitable humiliation.

A Whitehall insider told us, "We have looked at the numbers, and we have heard what the voting public is saying, and the chances of Theresa being returned as PM are so infinitesimally small that we have decided to call the whole thing off. 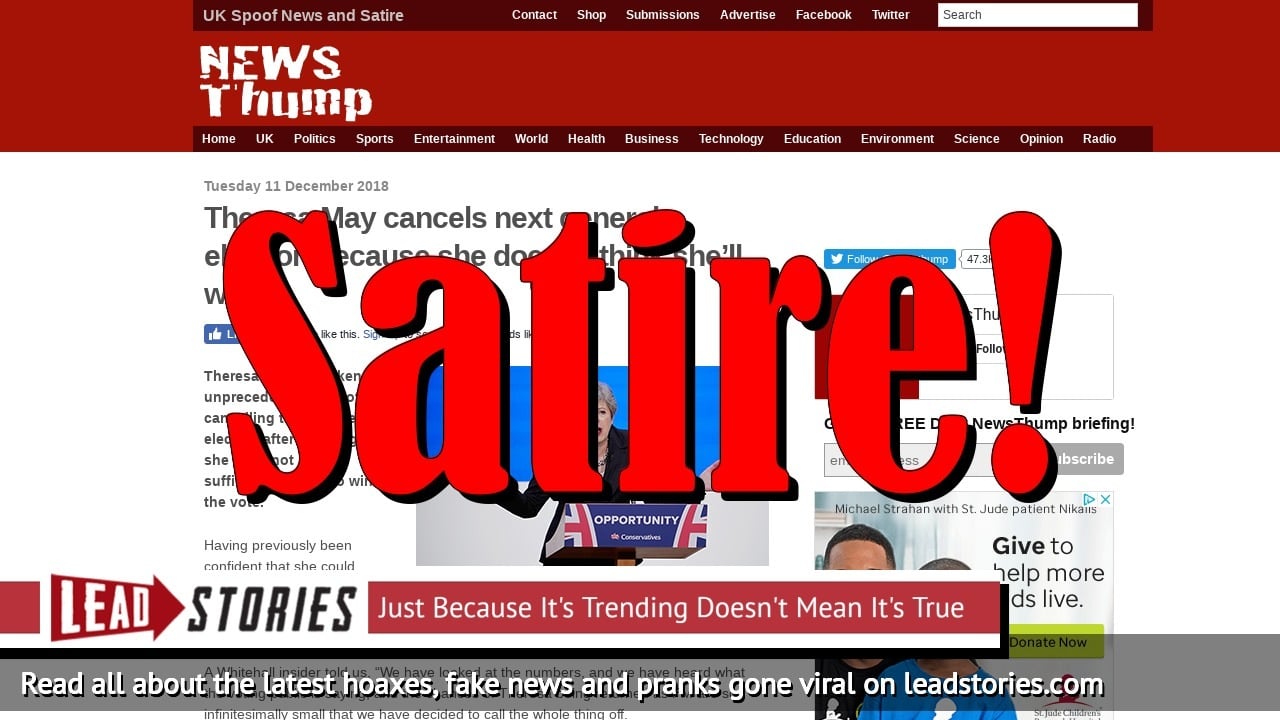 Users on social media only saw this title, description and thumbnail so people who only saw the headline might have mistaken it for real news:

Theresa May has taken the unprecedented step of cancelling the next general election after deciding that she does not have sufficient support to win the vote.

NewsThump is a satire site and the story is mocking recent events in Britain involving May's decision to delay a parliamentary vote on the Brexit deal because it was clear there was not enough support for her position:

NewsThump comes with an about page that explains what is going on:

Welcome to NewsThump! No, really, we mean it.

NewsThump is a satirical and spoof news website, taking a daily swipe at current affairs from the UK and around the world. It is published and owned by Thump Publishing Limited.

We aim to be equal opportunity piss-takers and have no particular affiliation or political preference. It is our stated aim to mock absolutely everyone, eventually.

We are not afraid to skip a few steps like checking facts or corroborating sources, and we never let the truth ruin a funny story (it's much easier just to make everything up). So, for clarification - If you read a story on here, then you are NOT supposed to believe it. It has been completely made up purely for entertainment purposes. It's also worth noting that we regularly use rude words and stuff, so you need to be 18 to be reading this. All images are courtesy of iStockphotos/Getty and are used for illustrative purposes only, and anyone depicted is a model.

We wrote about newsthump.com before, here are our most recent articles that mention the site: