Did Kenyan authorities release former U.S. President Barack Obama's "real" birth certificate? No, this is a fake report pubished initially by a Canadian entertainment website that makes a living by publishing fictional stories often involving weird crimes, bizarre sex acts or strange accidents. It is not real. There is no legitimate sourcing and the article does not share the purported "real" document.

The story originated from an article (archived here) where it was published in May 2014 under the title "KENYA: AUTHORITIES RELEASE BARACK OBAMA'S "REAL" BIRTH CERTIFICATE" and copied many times by other fake news sites. It opened:

The Office of the Principal Register of the Nyanza Province, in Kenya, has finally released 11 exclusive documents concerning Barack Obama's alleged birth and early childhood in the country.

These official papers had been requested for years by the Tea Party Patriots, an American conservative organization, to no avail, but the Kenyan Supreme Court recently ordered authorities to release the documents, based on a law on "access to information.

These files, if they turn out to be verifiable, could mean that Mr. Obama had no legal right to become the American president under the country's law.

The controversy over where Obama was born -- promoted by the so-called "birther movement" -- has its roots in Illinois when a local political activist began painting Obama as a closet Muslim in 2004, when the future president was running for the U.S. senate, according to Politico. It gained steam during the 2008 presidential primaries as some "hard core" Hillary Clinton supporters shared a "birther" email, and it dogged Obama during the general election campaign against Republican nominee John McCain, Politico reported.

Donald Trump jumped into the fray on March 23, 2011, during an appearance on The View television show when he asked "Why doesn't he show his birth certificate? I wish he would because I think it's a terrible pall that's hanging over him ... There's something on that birth certificate that he doesn't like."

Obama's mother Stanley Ann Dunham, a white American citizen from Kansas, was 18 years old when she gave birth. His father was a 25-year-old student from Kenya, Barack Hussein Obama. 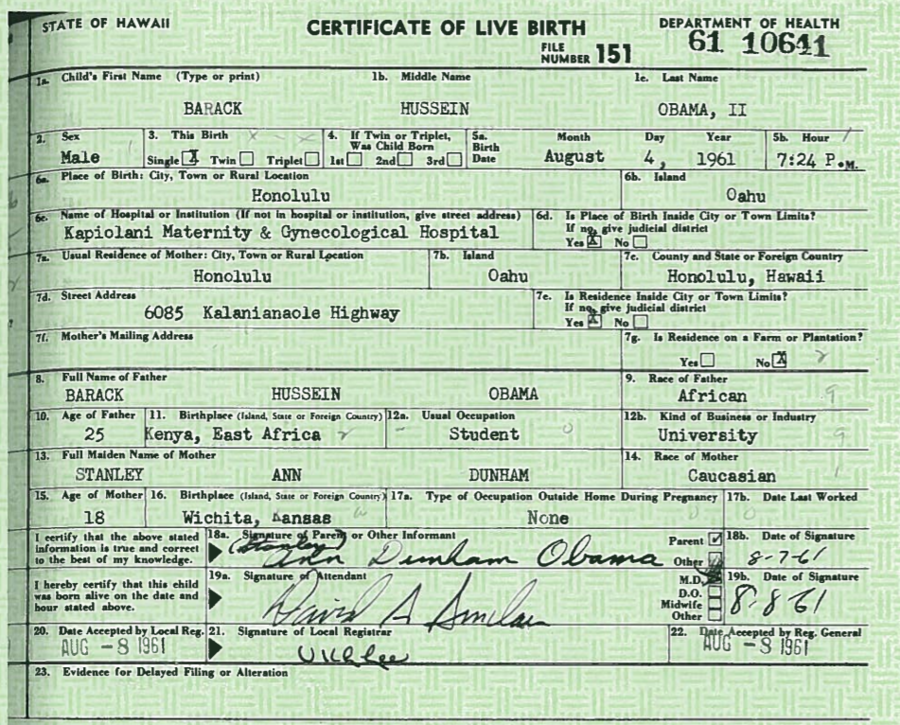 The White House posted a "live birth" document online showing Barack Hussein Obama, II, was born at the Kapiolani Maternity and Gynecological Hospital in Honolulu, Hawaii, on August 4, 1961. See it here on the Obama archives site.

On March 20, 2019 the site added a new header that included the slogan "Where facts don't matter" to make it clearer to casual visitors the published content is fictional: