Did President Donald Trump go ballistic on Fox and Friends and is there a screenshot to prove it? No, that's not true: the screenshot is digitally manipulated.

An image purporting to be a screenshot from Fox and Friends falsely quotes President Trump as saying:

"The Democrats can subpoena me and my administration for the next 10, 15, 20 years and we will never capitulate. They need to face the fact that I am in charge, this is my country and I will do as I please, they have no control over me. The people support me and will always support me."

An example of the image can be seen in this post (archived here) where it was published on May 22, 2019. The image also came with a subtitle that read:

This is the screenshot in question: 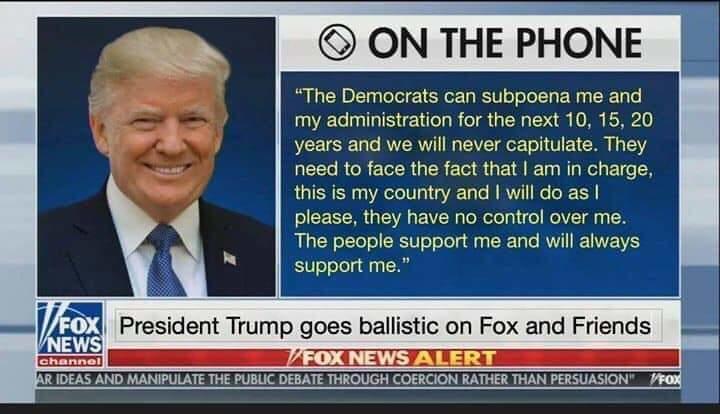 The chyron at the bottom reads "ar ideas and manipulate the public debate through coercion rather than persuasion". That appears in a clip from Hannity dated April 24, 2019 which you can watch here:

Donald Trump: Investigations Against Me Were a 'Coup' to 'Overthrow the United States Government'

Throughout his interview with Sean Hannity on Thursday night, President Donald Trump raved that Robert Mueller 's probe and the investigations into him were nothing less than an attempted "coup" to depose his administration.

The line in question appears aroun the fifty second mark, here is a screenshot of the moment in question:

It is quite obvious the text in the false image has been superimposed over this image.