Does a viral photo show Melania Trump hosting military moms at the White House in 2019 and is there a disturbing lack of non-caucasian people in the photo? No, that's not true: the picture does not show Melania Trump, it was not taken this year and it wasn't even taken at the White House. It shows Ivanka Trump at an event in 2018 where she was invited to speak (i.e. she was not hosting it).

The picture recently went viral again through a Facebook post (archived here) on The Other 98% where it was published on May 12, 2019. The caption on the image read:

Many comments on the image were remarking there was a lack of racial diversity in the photo: 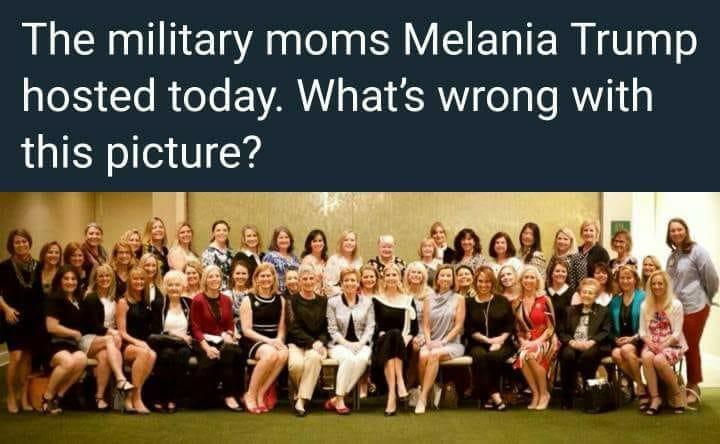 There are several things wrong with the picture, but most of them have to do with the caption and the context.

So, what did actually happen? Melania Trump did host an event for military mothers at the White House on May 10, 2019.

Military moms get a Mother's Day salute at the White House

WASHINGTON - President Donald Trump honored the nation's military mothers Friday, calling them "the backbone of America." Trump told a group of moms gathered in the East Room of the White House for the third annual Celebration of Military Mothers that their "unwavering dedication and support strengthens our entire nation.

But the picture in question was not taken at this event. It was taken at a lunch event in 2018 named the "Joint Armed Forces of Washington Luncheon" and it shows members of the Air Force Officers' Spouses' Club of Washington, D.C. Here is another picture from that event:

Can you find @ivankatrump? I did yesterday at the #jafowl2018 luncheon. Read about it in my blog. Link in bio. #milso #milspouse #airforcewife

And here is one showing Ivanka speaking at the event:

Later in 2018 the group picture in question was used in a tweet claiming it was taken at the White House:

The WH hosted military spouses today. Our armed forces are 40% non-white. The odds that -- BY CHANCE -- a group of 52 military spouses would contain no people of color are lower than 100 trillion to 1. So, umm.... pic.twitter.com/zi6XzmzYBd

As it was pointed out at the time, the picture was not taken at the White House during the May 11, 2018 event:

There's A Big Problem With That Viral Military Spouse Photo

As a one-time 'Ebola czar' under President Barack Obama, Democratic political operative Ron Klain spent months fighting to stop viral outbreaks. On Friday, though, he found himself in the middle of one.May 11 marked Military Spouse Appreciation Day, which Klain decided to celebrate by bitching about...

The same conclusion was reached by Snopes:

FACT CHECK: Does This Photograph Show Only White Military Spouses at the White House?

Yet here we are in 2019 and people are using a picture of Ivanka Trump speaking at an event for military spouses she was invited to that took place in The Waterford Springfield hotel in Virginia in 2018 to make comments about Melania Trump hosting an event for military moms in The White House in 2019. Don't fall for it.