Did soccer superstar Cristiano Ronaldo donate €1.5 million to feed Palestinians for iftar or for anything else? No, that's not true: the story appears to have been initially published on several Albanian websites on May 14, 2019 without any real sourcing. It has since spread to several other places, all reporting that other sites are reporting the story. But there was no mention of the donation on Ronaldo's own website or social media profiles and when Lead Stories contacted Ronaldo's management agency they confirmed to us that the story was false, "like many other stories about Ronaldo".

The story went viral through an article published on May 16, 2019 by 9SportPro titled "Ronaldo surprised with his gesture, donates €1.5 million to feed Palestinians for iftar" (archived here) which opened:

The Portuguese superstar Cristiano Ronaldo is known as one of the most human person in the world.

He often donates lot of money to help people with different problems but one of the places where Cristiano has helped a lot is Palestine. According to reports he has donated 1.5 million euros to Palestinians to feed them for iftar.

When this news become public lot of muslims from around the world has thanked Ronaldo for this amazing gesture. 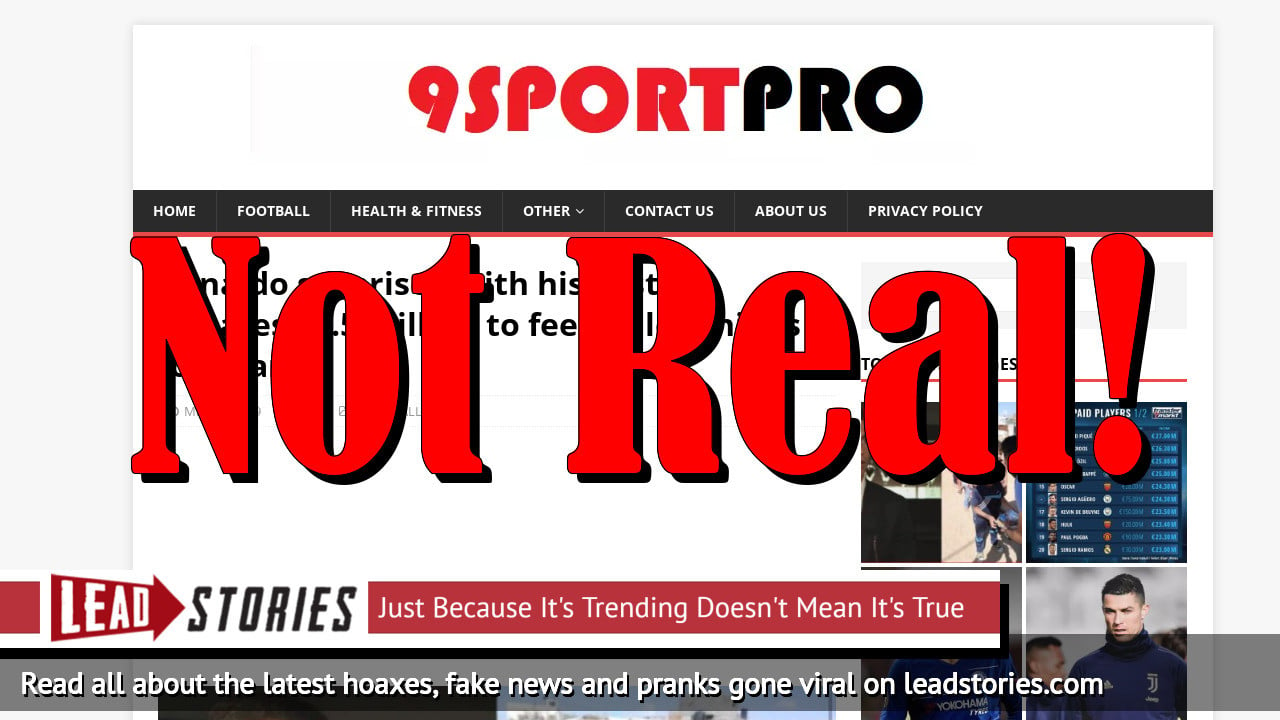 Ronaldo surprised with his gesture, donates €1.5 million to feed Palestinians for iftar

The Portuguese superstar Cristiano Ronaldo is known as one of the most human person in the world. He often donates lot of money to help people with different problems but one of the places where Cr...

That story referenced "infoshqipmedia" as the source, which is an Albanian-language website from Macedonia that indeed published this story (archived here):

Here is a Google Translated version of the story:

Cristiano Ronaldo, the super Portuguese football star is known as one of the most humane people in the world.

He often donates large sums of money to help the needy but one of the countries that has helped him most is Palestine. According to some foreign media it is rumored that Ronaldo has decided to donate 1.5 million euros to the Palestinians.

As soon as this news has been made public, many Muslims have thanked Ronaldo for this wonderful and at the same time extraordinary gesture.

Cristiano Ronaldo has many Muslim friends with whom he visits popular Arab countries. Below you can see a photo of him a few years ago with a scarf that was in the colors of the flag of Palestine. This gesture had irritated the Israelites.

The site did not specify on which "foreign websites" it was "rumored". We found at least two other Albanian websites making the claim on May 14, 2019: Albanien Show (archived here) and FaktiDitor (archived here).

Based on these reports it appears a Twitter account named "@onwa_dan" picked up the "news" on May 16 (tweet archived here), changing the currency of the donation in the process:

Cristiano Ronaldo donate $1.5m to Palestine Gaza. Behind every successful person, check out where he pays his homage. You can't reach out to lives in need especially #Orphans & remain the same. You might not have millions to change lives, but a token can put smiles on their faces pic.twitter.com/OWyPRsFJ5M

Many people seem to have believed that this account belonged to the actual charity that received the money. But the twitter account in question also posted some other tweets indicating the Onwadan charity foundation is based in Kuje, Nigeria and not in Palestine (tweet archived here):

It's all about reaching out to lives & changing of destinies. By so doing, we contribute our own qauter towards humanity & make this world a better place for everyone to live, especially those orphaned children facing hardship across the globe. https://t.co/aCU8LTYw27 pic.twitter.com/iw9z7TQ3ur

It also posted quite a number of messages about Bitcoin and other cryptocurrencies. So we decided to reach out to the Twitter account to inquire if they were indeed the charity receiving the money and if not, what their sources were for the news. Lead Stories received no reply but we subsequently got blocked by @onwa_dan on Twitter:

Apparently a tweet from a dodgy Nigerian charity was enough for the Venezuelan televison network Telesur to publish a report about the donation (archived here):

Although sports media rarely highlights this facet of the soccer star, Ronaldo has always been close to the Palestinian cause

And that in turn was enough for RT to report that there were "reports" about the donation (archived here):

Portuguese football star Cristiano Ronaldo has donated $1.5 million to help feed fasting people on the Gaza Strip during the Muslim holy month of Ramadan, according to reports. The Juventus striker has reportedly given the sum to the people of Palestine as part of a long relationship between the player and the Palestinian cause, with the Portuguese star speaking out over the treatment of the Palestinian people by Israel in the past.

What none of these sites did along the way was to contact Ronaldo's management agency Gestifute. We did and they confirmed to us sources close to the player can guarantee the story is false, "like many other stories about Ronaldo".