Do Jeffrey Epstein's private jet flight logs list Joe Biden, John McCain, Barack Obama, Hillary Clinton, Pope Francis, four CNN Anchors, Canadian Prime Minister Justin Trudeau, and two dozen other well-known political leaders as passengers on the accused sex trafficker's "Lolita Express?" No, that's not true: The list that has spread on social media is fake, with the exception of the name of former President Bill Clinton, who appears to have flown 27 times on Epstein's Boeing 727. Lead Stories obtained the real documents in 2015 and you can read them below.

The fake list is included in several variations on social media, including a post (archived here) shared on July 20, 2019 with the message:

Epstein's flight logs were dropped yesterday. Know any of these names??

In fact, former President Bill Clinton is the only one of these names actually appearing on the flight logs for Epstein's plane, a Boeing 727 built in 1969 and carrying the tail number N908JE. Clinton flew on Epstein's jet on a multi-stop, week-long African journey in 2002. It was billed as an anti-poverty, anti-HIV tour, that included comedic actor Chris Tucker and billionaire Ron Burkle as passengers. The former president also flew on the plane between Japan and Hong Kong, as well as domestic flights in 2003, according to the flight logs.

Francis did not become Pope Francis until 2013. He was known as Jorge Mario Bergoglio before that. He served as the archbishop of Buenos Aires, Argentina, from 1998 to 2013 and there is no reason to believe that Epstein, who is jewish, would have known him or invited him on his plane.

A meme that references the same false list focuses on the false claim that CNN's Stelter, Tapper and Cuomo flew on Epstein's plane. The claim that Stelter would have flown with Epstein in 2002 or 2003 is especially odd, considering the "Reliable Stories" host was born would have been about 17 at the time. 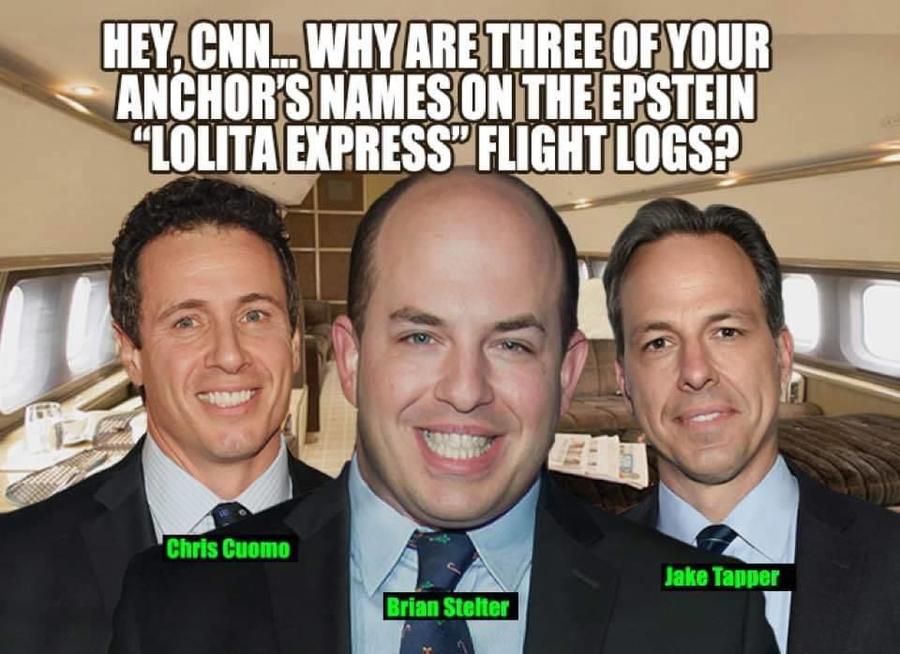 The flight logs handwritten by pilot David Rogers were obtained by reporters (including this writer) in January 2015 after they were filed as an exhibit in federal lawsuit. You can download them and check them here:

SInce publishing this story, one of the promoters of the false list posted a related false meme, suggesting that this debunk story was the work of "pedo predator CNN." That is a false claim. Lead Stories is not affiliated with CNN in any way. This writer did work for CNN as a reporter from 1989 until 2014. He then was a national correspondent for AMI Inc. and closely covered the Epstein sex scandal for that company's publications. You can read Duke's reporting by clicking here.