Was the student Bernie Sanders arrested for throwing eggs at black protesters in 1964? No, that's not true: The Vermont senator and Democratic presidential candidate was arrested in 1963 for taking part in an anti-segregation protest -- in support of black protesters. It is documented in a black-and-white photograph found in the archives of the Chicago Tribune in 2016.

The story originated from a meme using the old image, including a post (archived here) published on July 14, 2019 under the title "The ultimate hypocrite". It opened:

The meme is a bizarre effort to rewrite Sanders' history of civil rights activism. Instead of showing him being arrested in 1964 for attacking black protesters with eggs, the photo is showing Sanders being arrested for protesting in support of blacks. The image is from an acetate negative found buried deep in the archives of the Chicago Tribune in 2016. It shows a young Bernie Sanders being hauled off to jail by police after a 1963 anti-segregation protest.

The newspaper's caption reads: "Chicago police officers carry protester Bernie Sanders, 21, in August, 1963 to a police wagon from a civil-rights demonstration at West 73rd Street and South Lowe Avenue in Chicago. He was arrested, charged with resisting arrest, found guilty and fined $25. He was a University of Chicago student at the time."

Sanders' had been accused of overstating his college days involvement in the civil rights struggle by some Hillary Clinton supporters, so the discovery of the photograph helped bolster his biography. 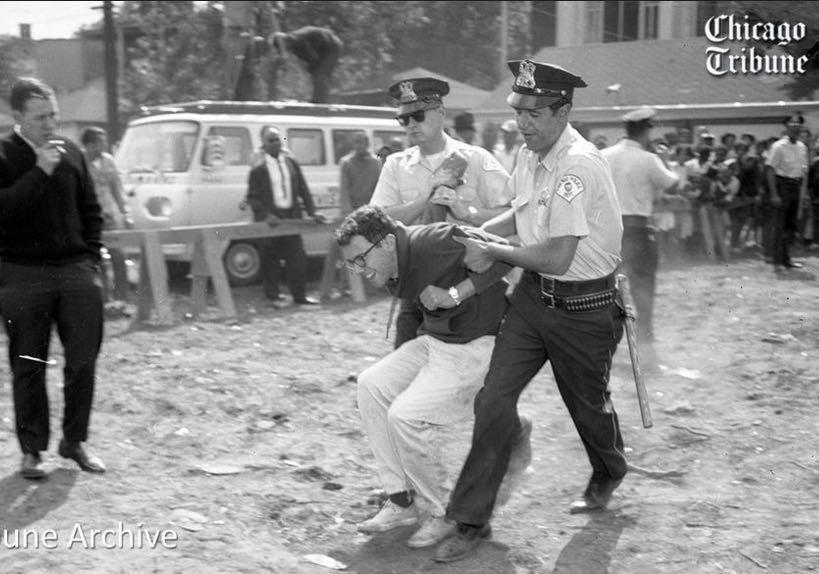