Did Representative Ilhan Omar say "My People did something" in relation to the 9/11 terror attacks of 2001? No, that's not true: a meme making that claim distorts the actual controversial remark she made where she said "some people did something" while refering to the attacks.

The made up quote appears in an image shared on social media, for example in this post (archived here). The image shows the burning Twin Towers with Omar's face superimposed several times and the text 'My people' did something. The image was also captioned:

Had a hell of a time trying to post this the old fashion way. FB would not let me save and post. If by any chance you get this pass it around before they take it off. 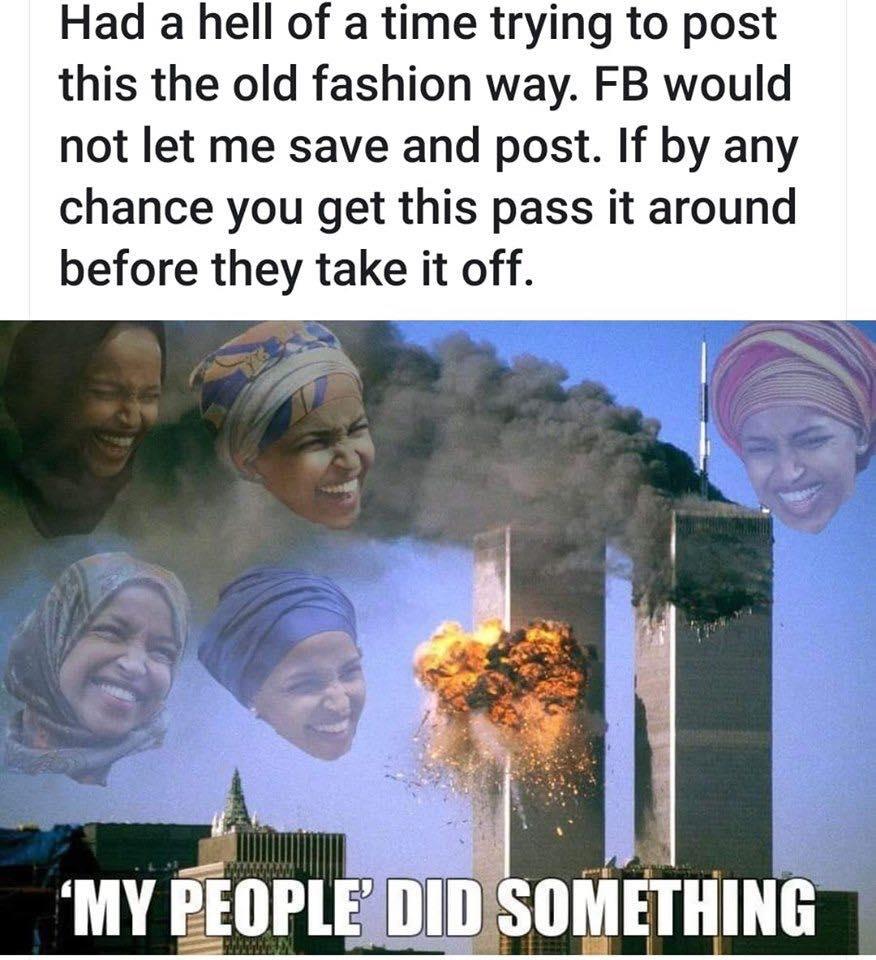 It is clear she says "some people did something", not "my people did something". She was talking about how all muslims were eyed suspiciously after "some of them" conducted the biggest terror attack ever on U.S. soil. These comments caused quite the controversy at the time as they appeared to minimize the events of 9/11 but that is a different discussion. The important point in this case is that she did not say "my people".

In a democracy it is perfectly fine to oppose everything Ilhan Omar stands for but there is no need to make up false quotes to do it.

Saying they were "her people" would technically not even make sense: Omar is of Somali descent and the 9/11 hijackers came from Saudi Arabia, The United Arab Emirates, Egypt and Lebanon. They did not even come from the same continent as Omar. Unless one would define an entire religion with every branch and sect in it as "a people", but again, that is a different discussion. And not relevant here either because Omar did not say "my people" to begin with.

Note that posting inaccurate quotes attributed to politicians is perfectly allowed by Facebook's Community Standards and they won't remove a post for that reason:

Reducing the spread of false news on Facebook is a responsibility that we take seriously. We also recognize that this is a challenging and sensitive issue. We want to help people stay informed without stifling productive public discourse. There is also a fine line between false news and satire or opinion. For these reasons, we don't remove false news from Facebook but instead, significantly reduce its distribution by showing it lower in the News Feed.