Did former President Barack Obama send a tweet claiming Abu Bakr Al Baghdadi was "Great Man, An Innocent Man, & My Friend"? No, that's not true. The story was published by a liberal satire website that tries to misleadTrump supporters and Republicans into sharing made up stories that are clearly marked as satire when you actually click them. Articles from the site are frequently copied by foreign-run fake news websites. The people liking and sharing these stories are enriching foreign website operators (or a liberal from Maine) via the ad revenue generated with the content which is probably not what they expected or wanted.

The story originated from an article published by ObamaWatcher on October 28, 2019 titled "Obama Tweet On Al Baghdad:'A Great Man, An Innocent Man, & My Friend'" (archived here) which opened:

It's been widely speculated that Barack Obama is the man behind the formation of ISIS at the end of the twentieth century and that he has funded them and supplied them with arms and intelligence ever since. He has pubicly stated that he sympathized with their cause and even hinted that he would provide them with American resources should they be in need during his 2008 State of the Union address. These statements are irrefutable facts, captured on video and broadcast to the entire nation.

So it came as no surprise today when Obama used his Twitter account to send out words of sadness about the death of Abu Yasr Al Bigdadi, who he called a "dear friend," as seen below. 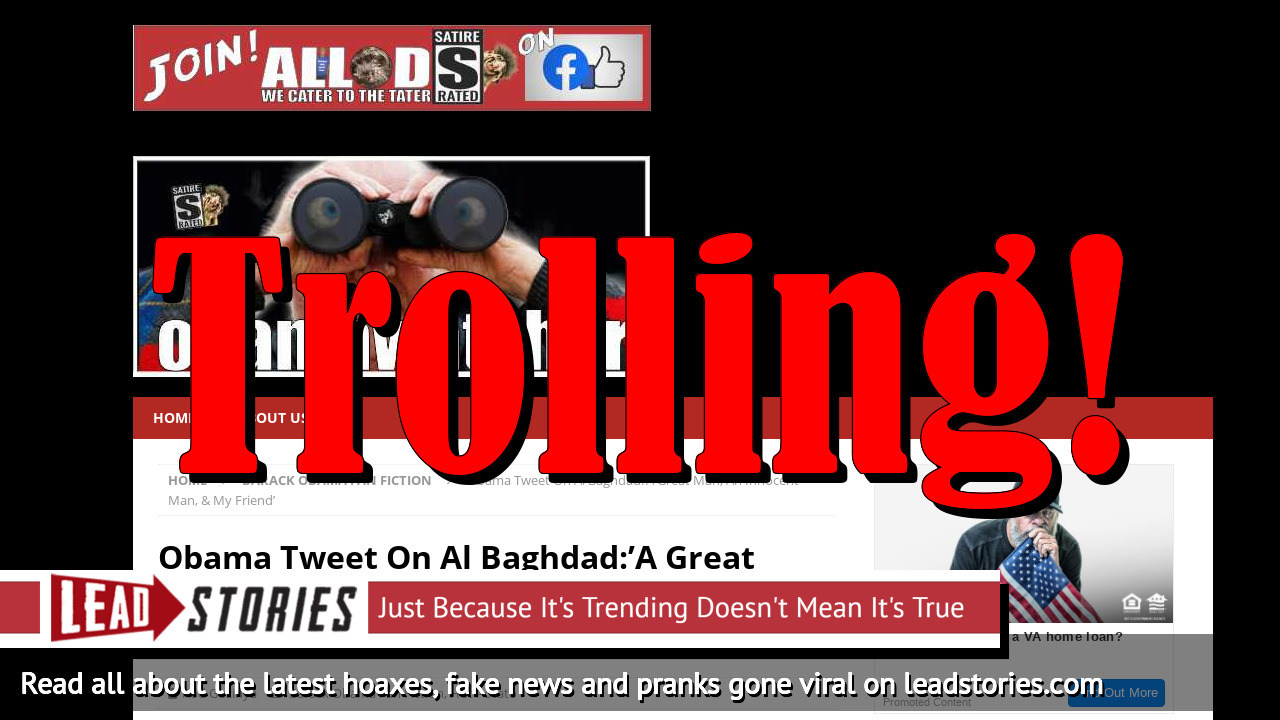 It's been widely speculated that Barack Obama is the man behind the formation of ISIS at the end of the twentieth century and that he has funded them and supplied them with arms and intellige...

The story was posted in a category named "Barack Obama Fan Fiction" and there were several satire disclaimers plastered all over the site.

The story also contained a fake tweet that supposedly read:

Michelle and I are heartbroken over the passing of our friend, Abu Bakr al-Baghdadi

However that tweet seems to be an edited screenshot of this real Obama tweet mourning Elijah Cummings. The like and retweet counts are an almost exact match (at the time of publication):

Michelle and I are heartbroken over the passing of our friend, Elijah Cummings. May his example inspire more Americans to pick up the baton and carry it forward in a manner worthy of his service. pic.twitter.com/lM2rES3PNV

The site that posted the fake tweet is part of the "America's Last Line of Defense" network of satire websites run byself-professed liberal troll Christopher Blair from Maine along with a loose confederation of friends and allies. Blair has been in a feud with fact checking website Snopes for some time now and has also criticized other fact checkers in the past who labeled his work "fake news" instead of satire. In reaction to this he has recently rebranded all his active websites and Facebook pages so they carry extremely visible disclaimers everywhere.