Was a medical experiment in India about male birth control stopped because the testicles of the patients started exploding during sexual intercourse? No, that's not true: the story was originally put out by a South African satire website that used to disguise itself as news and got widely picked up by various English-language websites in Africa that didn't realize the source of the story was a joke. What probably also didn't help was that Facebook blocked posting links to the original source article because the thumbnail image that went with it contained nudity, leaving it impossible for people to point out the original source in the comments when their friends shared stolen copies of the story that used a less-offensive thumbnail image.

Male birth control testing has been halted in India after 30 test subjects testicles exploded during sexual intercourse.
The testing of the male birth control involved 139 men under the age of 41 who were living with their wives and had at least two children each.

The men were given a single dose of the male birth control shot and then followed up by doctors for six months. Their wives were also monitored to find out if they became pregnant.

Eight months later 30 of the test subjects were rushed to the ER with bust testicles. They all claimed they testicles just popped like balloons spilling semen like fluid all over. The busting of the testicles happened when they were about to ejaculate.

Male birth control testing has been halted in India after 30 test subjects testicles exploded during sexual intercourse. The testing of the male birth control involved 139 men under the age of 41 w...

The site used to look like a news website until several weeks ago but it has since made alterations. It used to post stories in a category named "FEATURED NEWS" (which would appear three times above each article). That has now been changed to just "featured". The name of the site in the header also used to be "ihlaya news" before it got changed to "n p a s".

Under the header of the site there is disclaimer that reads "nuusparodie waarvan jy hou". In Afrikaans this means "news parody you like". And "ihlaya" means "a joke" in Zulu. The Facebook page associated with the site has quite the big disclaimer at the top of the page as well:

So it certainly looks like the site is trying to avoid getting the reach of their satire articles reduced by Facebook's third party fact checkers by not trying to look like a news site. However with this story they made a crucial mistake: they used a photo of a male scrotum in the thumbnail image of the post leading to Facebook's moderators flagging the post based on rules against nudity or sexual activity. This is the message I got when I tried commenting with a link to the original satire article when one of my friends posted a version on his timeline that came from a news site that had copied the article but with a different thumbnail image: 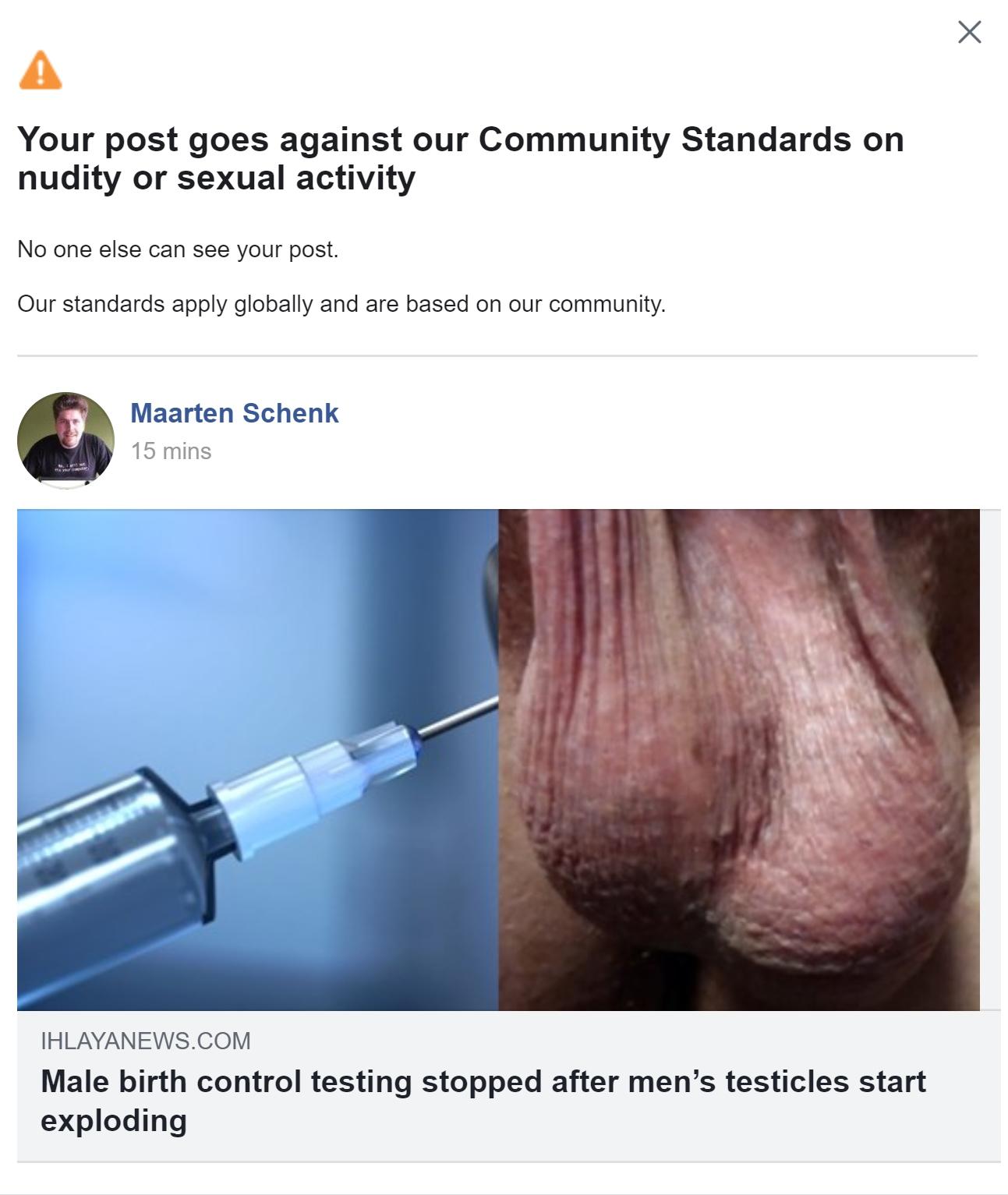 We wrote about ihlayanews.com before, here are our most recent articles that mention the site: