Did House Speaker Nancy Pelosi say, "If impeachment fails, I will resign immediately"? No, that's not true: Pelosi never made such a statement. The story was originally published by a liberal satire website that tries to mislead Trump supporters into sharing made up stories that are clearly marked as satire. Foreign-run fake news websites frequently copy articles from the site. The people liking and sharing these stories are enriching foreign website operators or a liberal from Maine via the ad revenue generated with the content, which is probably not what they expected or wanted.

The story originated from an article published by Bustatroll.org on December 9, 2019, titled "Pelosi: 'If Impeachment Fails, I Will Resign Immediately'" (archived here) which opened:

Speaker Nancy Pelosi gave a startling and wholly unexpected statement today during an interview with Belgian magazine "Le Mensonge." With impeachment dominating the news these days, the conversation naturally turned to the subject after preliminary pleasantries. Pelosi was asked point blank,"What will you do if impeachment doesn't get the votes needed to pass?"

The Speaker did not hesitate, launching into a long-winded diatribe before eventually giving a response to the actual question:

'This impeachment is necessary for our national security. President Trump is a threat to the safety of every American and probably the rest of the earth too. He's unstable and sociopathic.' 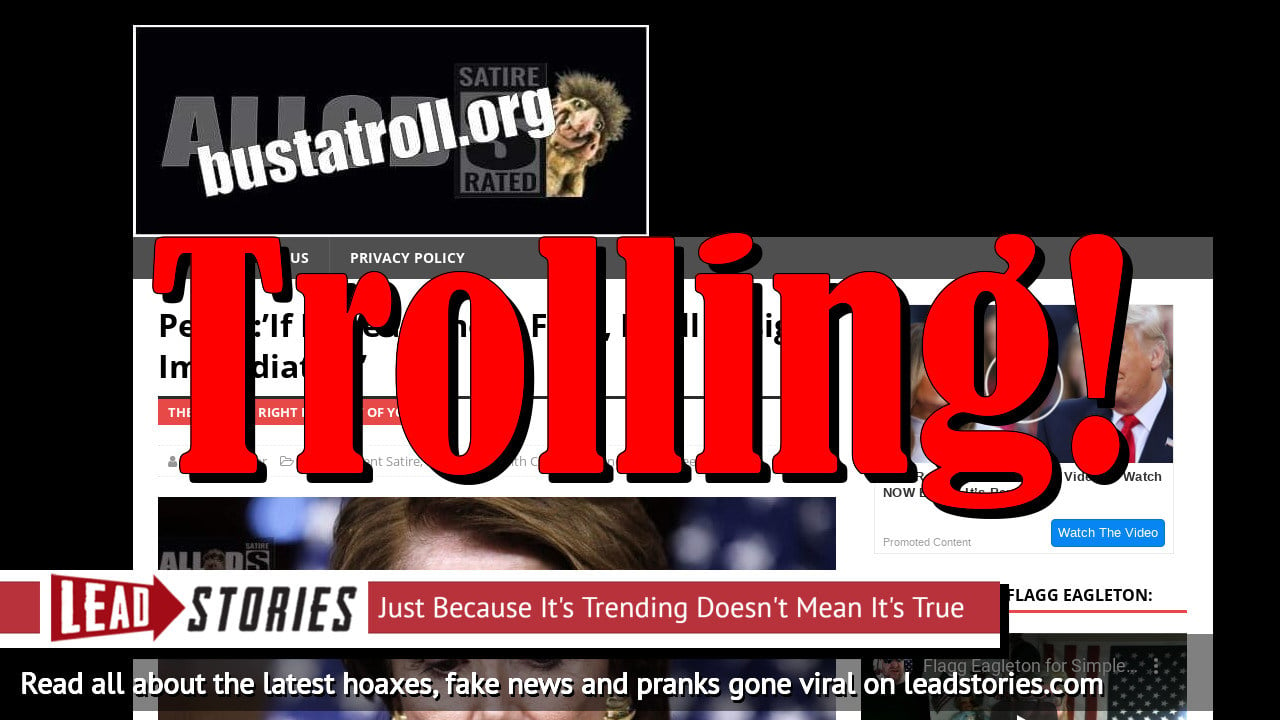 The story is false and is labeled as satire. The Belgian magazine quoted in the article, "Le Mensonge," does not exist. The word means "lying" or "a lie" in French.

The bustatroll.org site is part of the "America's Last Line of Defense" network of satire websites run by self-professed liberal troll Christopher Blair. The Maine resident works alongside a loose confederation of friends and allies. Blair has been in a feud with fact checking website Snopes. He has also criticized other fact checkers who labeled his work "fake news" instead of satire. In reaction, he has recently rebranded all his active websites and Facebook pages so they carry obvious disclaimers everywhere.

Articles from Blair's sites frequently get copied by "real" fake news sites that often omit the satire disclaimer and any other hints the stories are fake. Blair has tried to get these sites shut down, but new ones keep cropping up.

NewsGuard, a company that uses trained journalists to rank the reliability of websites, describes bustatroll.org as: