Did the Trump rally crowd size in Chicago show Democrats are turning to Trump? No, that's not true: The claim that the crowd size at President Donald Trump's rally in Chicago suggested Dems were leaning toward Trump was satire, published by a liberal who is trolling conservatives. Even the images used in the fake story show the piece is fiction. Still, many people read, believe, and share the article without awareness that it is a joke. Also, other websites steal the story for their own pages, but without the satire disclaimers.

The story originated from an article published by dailyworldupdate.us on December 4, 2019, titled "Trump Rally Crowd Size In Chicago Shows Dems Are Turning To Trump" (archived here) which opened:

The popularity of President Trump never stops growing......but you'll never hear that from the media. In fact, they will consistently push the nthearrative that the opposite is true. As rally sizes explode, opinion polls show overwhelming support, and democrats continue to walk away, mainstream media sources constantly suppress this information. We at DWU are NOT mainstream media.

A recent rally for President Trump in the democrat stronghold of Chicago, Illinois showed by numbers what we all knew from simple observation - Trump is loved by people everywhere. 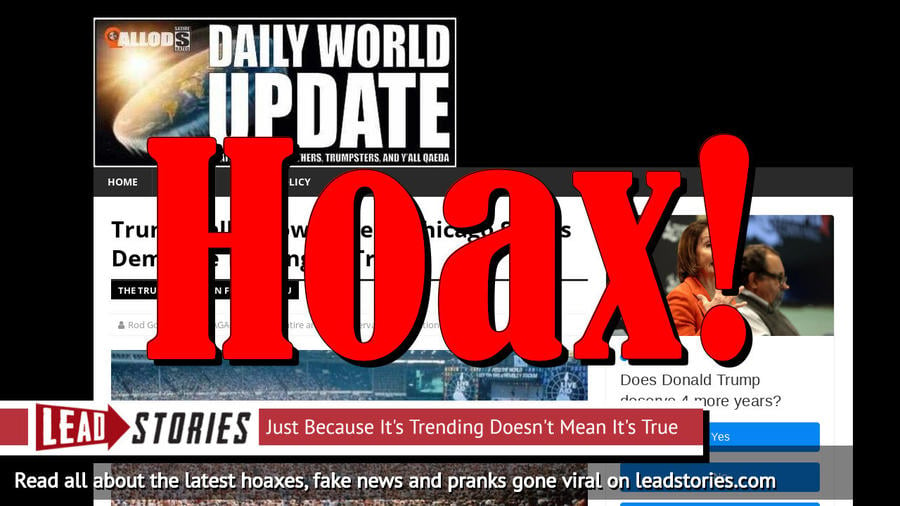 The popularity of President Trump never stops growing......but you'll never hear that from the media. In fact, they will consistently push the narrative that the opposite is true. As ...

Though Trump has held rallies in Chicago, this story is made up, as the lead picture shows. The crowd shown in the photo is from the massive Live Aid concert in 1985, held as a fundraising event to ease famine in Ethiopia.

The event saw upwards of 150,000 people arrive to witness our leader's word and to show their absolute support for his reelection. Massive crowds filled both the stadium and the surrounding streets, with Trump 2020 t-shirts and signs everywhere. It was a glorious sight to see.

But to look at the usual media sources, one would think that this celebration of leadership didn't happen. They were completely silent, with not one acknowledging the grand spectacle. It was an example of truly shameless partisan reporting (or lack thereof).

But MSM cannot hide the truth in the online Information Age. As the numbers of responsible news outlets grows online, the hidden truth will continue find its way into the homes of citizens nationwide.