Did Speaker of the House Nancy Pelosi cut off President Trump's salary because of the ongoing impeachment proceedings? No, that's not true: a single member of Congress can't alter the president's salary. Only through legislation passed by Congress can it be changed.

The claim originated from an article published by Potatriots Unite on December 19, 2019, titled "Due to Impeachment, Pelosi Halts Trump's Presidential Salary" (archived here) and opened with:

"It's well-known that President Trump donates his salary to a worthy cause every quarter, but after his historic impeachment by Speaker Nancy Pelosi and her Democrat led Congress, it appears that will no longer be an option. Using a statute in impeachment article 4-C of the United State's Presidential criminality code, she has halted any and all payments.

The order States that a President convicted of criminal activity while in office can not receive money or compensation of any kind for the remainder of his term. Moreover, Trump may also be forced to pay for wear and tear on White House furniture and properties, including several chairs in the oval office that have collapsed under his considerable weight, as well as 44 toilets that have been replaced due to massive structural failure and extreme pluggage. The total of these damages is near 4 million dollars." 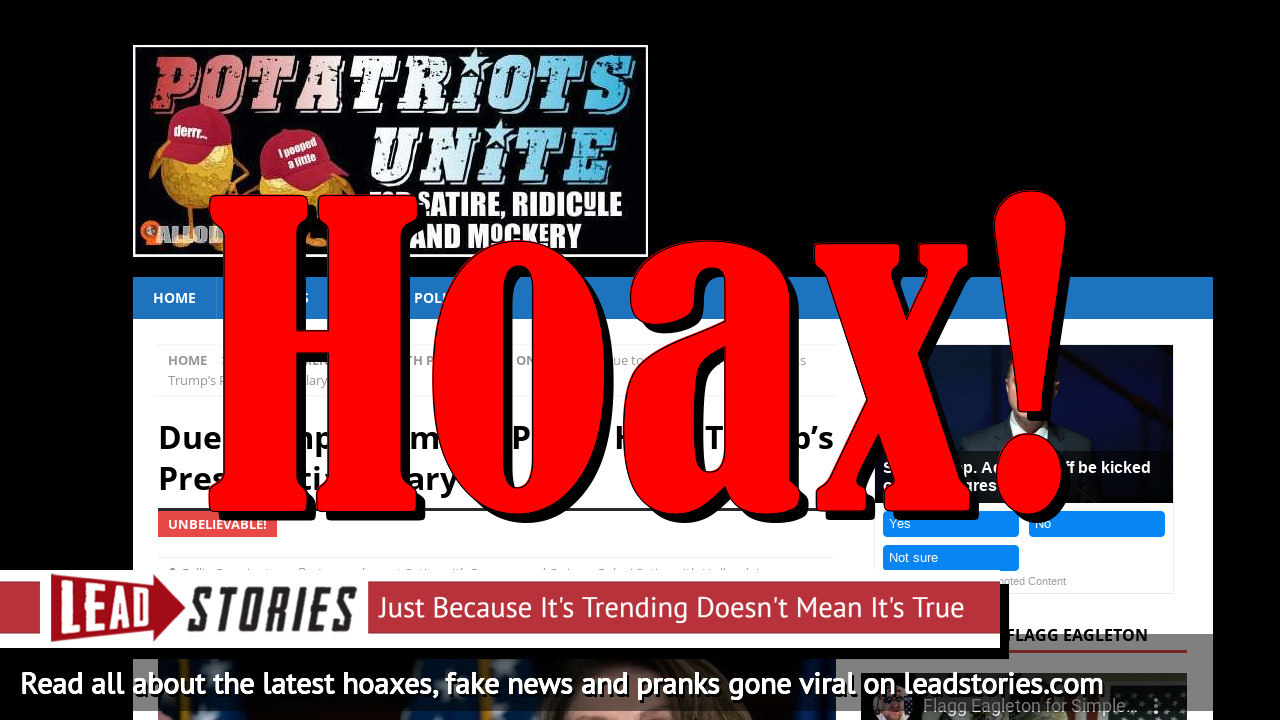 It's well-known that President Trump donates his salary to a worthy cause every quarter, but after his historic impeachment by Speaker Nancy Pelosi and her Democrat led Congress, it appears t...

The hoax article cites impeachment articles in its claim that Pelosi can halt all payments to Trump during his impeachment. But no real consequences related to the president's salary can take effect until if or when he is convicted by the Senate.

The U.S. House already voted to impeach Trump on December 18, 2019. The proceedings now move to the U.S. Senate, with Pelosi expected to send articles - abuse of power and obstruction of Congress - to the Senate this week.

Really, the financial incentives can only be revoked if Trump is officially ousted from the presidency by the Senate. Then, according to a clause in Article I Section III of impeachment, any convicted person is exempt from "Office of honor, Trust or Profit under the United States."

Additionally, the Former Presidents Act of 1958 says that presidents who have left office are entitled to a monthly pension, but that only pertains to those who don't leave the Office of the Presidency through impeachment. Trump would only be entitled to these continuing payments if he remained in office after the Senate trial.

For reference, the pensions are paid for by the Secretary of Treasury, and the president receives lifetime Secret Service protection. Since 2017, the annual presidential pension was set at $207,000 (the presidential salary is around $400,000).

And while it is true that Trump donated his salary to government agencies, the rest of the article suggests bogus claims, such as requiring Trump to pay for "wear and tear" on White House furniture "that have collapsed under his considerable weight, as well as 44 toilets that have been replaced due to massive structural failure and extreme pluggage."

We wrote about potatriotsunite.com before. Here are our most recent articles that mention the site: