Did former San Francisco 49ers quarterback Colin Kaepernick lobby to remove the National Anthem from football? No, that's not true: This story was published on a satirical site called Be Best.website which describes itself as "a subsidiary of the "America's Last Line of Defense" network of parody, satire, and tomfoolery." Kaepernick never made such an effort, and the story has been debunked as early as 2019.

The claim originated from an article (archived here) where it was published by BeBest website under the title "Kaepernick Lobbies to Remove the National Anthem from Football". It opened:

Ever since that rat traitor Colon Kaepernick first took a knee at an NFL game in San Francisco, he's been a thorn in the side of patriots from coast to coast. He claimed it was a protest over police brutality against minorities. A civil rights demonstration, he said. The nation wasn't fooled about his true reasons. True Americans knew that Kaepernick was spitting on our veterans, the flag, and the country as a whole each and every time he knelt through our glorious Star Spangled Banner.

The former quarterback is now switching sides. Sort of. Kaepernick is leading a group he's calling "Colin Opposes Political Statements", or COPS. The group is intent on eliminating public political statements at NFL events. But there's a catch. COPS spokesperson Regina Guertin explains what the movement is really about: 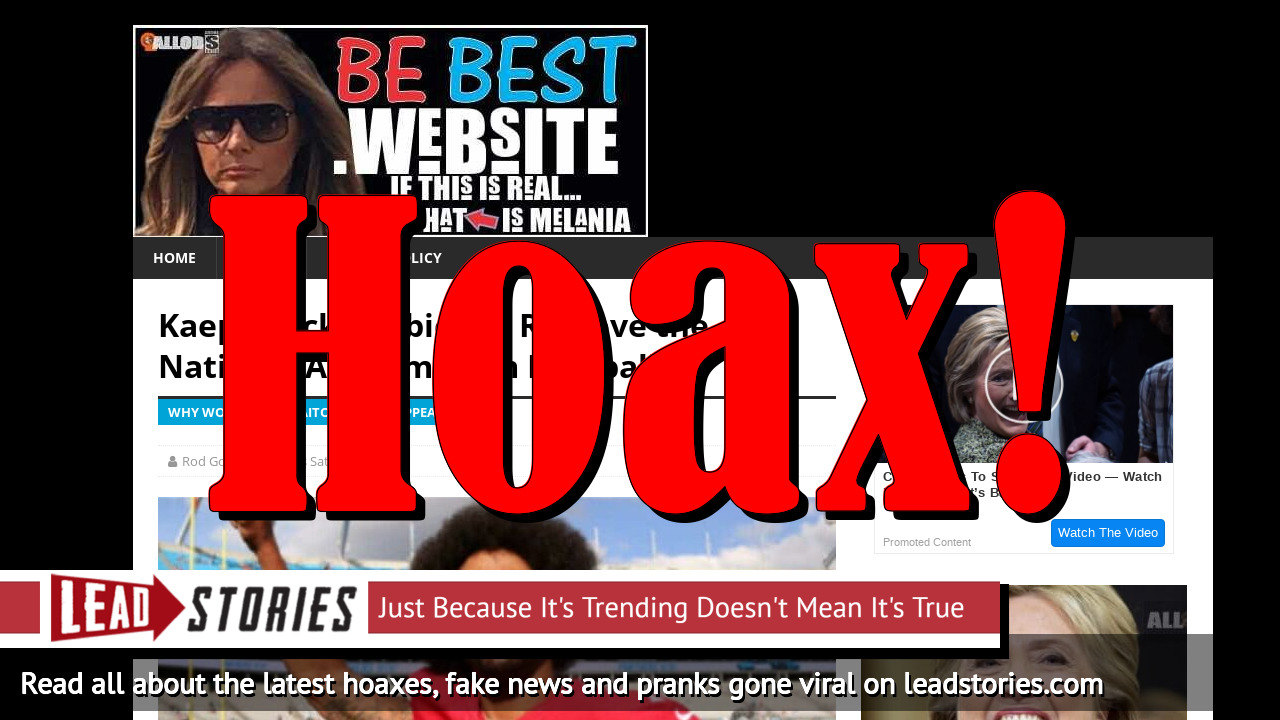 Kaepernick took a knee while the National Anthem played during the 2016 season to protest police brutality. However, there is no evidence he is seeking to remove the National Anthem from football. The group "Colin Opposes Political Statements" is a fictitious organization invented by BeBest for its satirical story.

The BeBest site comes with a clear satire disclaimer at the bottom of each article:

The owner and main writer of the site is self-professed liberal troll Christopher Blair, a man from Maine who has made it his full-time job to troll gullible conservatives and Trump supporters into liking and sharing his articles. He runs several other websites, including wearethellod.com, bustatroll.org or bebest.website. Sometimes, he is also known under his nickname "Busta Troll". A second man working on the sites is John Prager as revealed in this earlier story we wrote.

Blair and his operation were profiled by the Washington Post on November 17, 2018, by Eli Saslow:

NewsGuard, a company that uses trained journalists to rank the reliability of websites, describes bebest.website as:

We wrote about bebest.website before. Here are our most recent articles that mention the site:

Kaepernick Lobbies to Remove the National Anthem from Football