Does a study confirm that illegal immigrants collect more welfare benefits than American families? No, that's not always true: A 2016 study that is still being shared online has already been shown to exaggerate the cost of immigrant welfare use. Some of the tables included deep within the story actually paint a completely different picture and offer a more nuanced view.

The claims originated from an article (archived here) published by Newsmax on May 9, 2016, under the title "Illegal Immigrants Get More Welfare Than American Families." It opened:

The households of illegal immigrants receive an average of about $1,000 more annually in federal welfare benefits than do the households of non-immigrant recipients, a new analysis finds.

The CIS analysis study points out illegal immigrants are barred from directly receiving welfare, but may obtain it through their U.S.-born children. 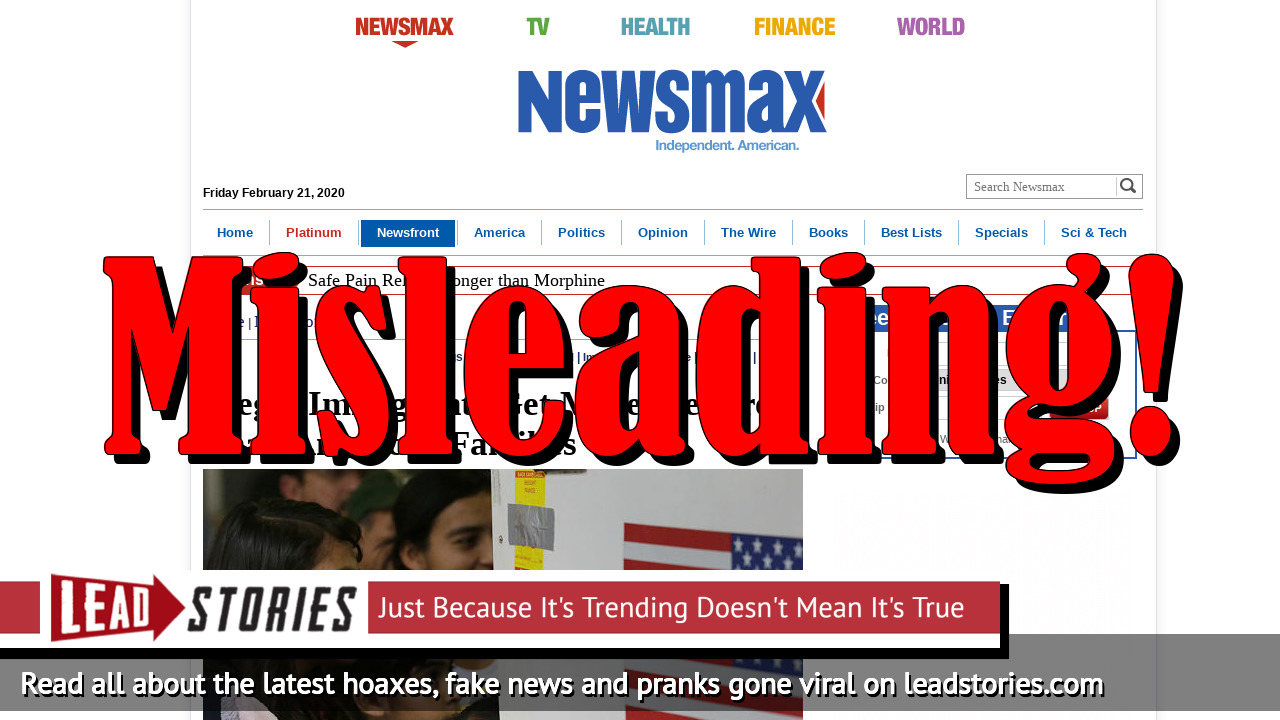 Illegal Immigrants Get More Welfare Than American Families while there are 19Million+ Americans living in poverty https://t.co/hoVVaGgeqE

The headline on the Newsmax article, which claimed that illegal immigrants get more welfare benefits than U.S.-born citizens, is misleading. The article cited a May 9, 2016, study by the Center for Immigration Studies, which has a tagline, "Low-immigration, Pro-immigrant."

However, the study looked at benefits that both illegal and legal immigrants receive, but the Newsmax article mentioned only illegaI ones. Also, children who were born in the United States but whose parents are immigrants are eligible to receive welfare benefits. The children are automatically considered American citizens. The article and study suggested that immigrants receive the benefits through their U.S.-born children, though it is the children, not the parents, who would receive the aid.

On May 10, 2016, the Cato Institute, a Libertarian think tank, fact-checked the CIS report. It said the group exaggerated the data in its summaries:

To elaborate, when various controls - such as worker status, education, and the number of children - are added in the accompanying tables, the findings reveal a very different story.

For example, according to Cato:

In Table 9, the CIS report added other controls that do not support the claim that immigrants receive more welfare benefits than natives. According to the CIS study:

The Newsmax story did not acknowledge all of this context - and the changing variables that adjust the findings - when it claimed that illegal immigrants receive more welfare benefits than those who were born in the United States. Indeed, as the CIS' study showed - buried deep within its own report - that is not always true. In some cases, immigrants use fewer welfare dollars compared to natives when worker status, education, and the number of children are factored in.

NewsGuard, a company that uses trained journalists to rank the reliability of websites, describes newsmax.com as:

A conservative news site that writes about politics, culture, business, technology, and healthcare.

We wrote about newsmax.com before. Here are our most recent articles that mention the site:

We have also compiled several fact checks on stories about welfare benefits. Here are a few: