Did doctors call it a "miracle" that Rush Limbaugh's cancer is shrinking? No, that's not true: This story was originally a work of satire published here by the satirical network "America's Last Line of Defense." It was then republished by many other fake news websites without the contextual satire warnings. Most of the plagiarized copies of the story have been run through an article spinner, (an automated word substitution program) and this has made the story very hard to decipher.

The plagiarizing sites are also using an aggressive form of pop-up advertising that includes deceptive download prompts and pornography. Lead Stories usually provides links directly to the articles we fact check, but for reader security, we will only be linking to archived copies of the websites in question.

This copy of the story originated from an article published by dachshunddaily.com on February 23, 2020, titled "Rush Limbaugh's Cancer is Shrinking - Doctors Call it a Miracle | My Blog" (archived here) which opened:

Surge Limbaugh just may endure lung disease, as indicated by top specialists in a field identified with the ailment. His tumors stand a decent possibility of "vanishing out and out," as per one expert, who says he is "out and out a wonder."

Another master in the field, Dr. Craftsmanship Tubolls, PhD, MMA. DTF, says Limbaugh's condition may not qualify as terminal at all on the off chance that he props up the way he's going:

The spun caption above has substituted words for proper nouns. "Rush" has been changed to "Surge" and "Art" has become "Craftsmanship" (Art Tubolls is a recurring character in the satire stories from ALLOD.) 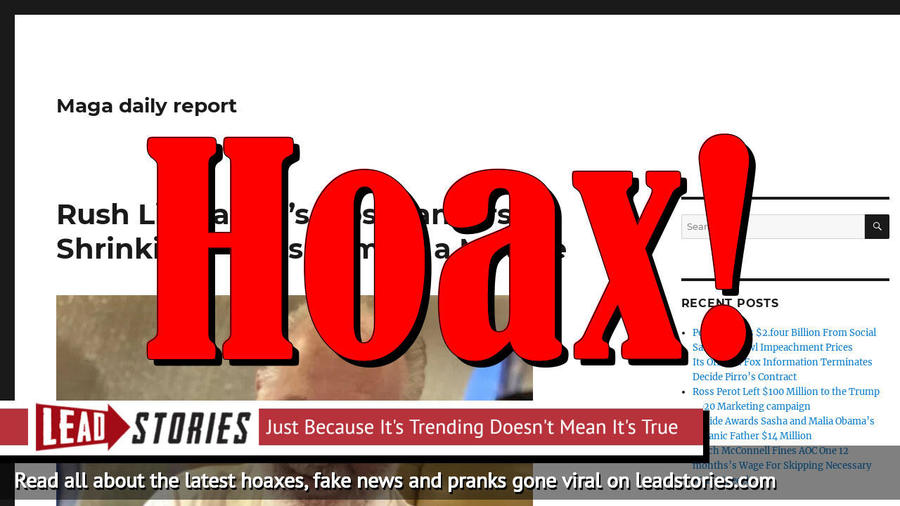 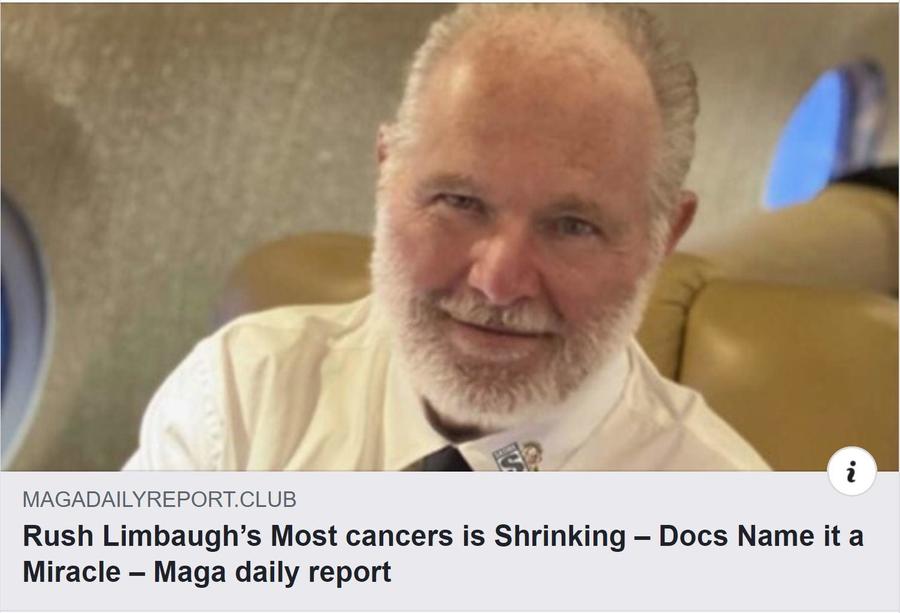 Several websites published copies with slightly different headlines, and the body of the text changed as well.

For its part, tucsonpress.site (archived here) published: 'Rush Limbaugh's Most cancers is Shrinking - Docs Title it a Miracle'.

In another version, countrymusicfamily.site (archived here) published: 'Rush Limbaugh's Most cancers is Shrinking - Docs Identify it a Miracle'.

Before these stories were published, on February 20, 2020, Limbaugh presented his thoughts on discussing his health condition and treatment with his audience. The transcript is titled "My Cancer Conundrum", and you can read the full text on his website (here). He said:

I don't want to keep everybody updated every day. It's just... (sigh) I'm just not comfortable talking about myself. I'm happier thanking everybody for all their ongoing support; then, the other side of it is, I know full well how inspiring it can be.

Limbaugh, the conservative talk show host, revealed February 3, 2020, that he had advanced lung cancer. A day later, at the State of the Union speech, President Donald Trump awarded him the Presidential Medal of Freedom.

The site where the fake story originated is part of the "America's Last Line of Defense" network of satire websites run by self-professed liberal troll Christopher Blair from Maine along with a loose confederation of friends and allies. Blair has been in a feud with fact-checking website Snopes for some time now and has also criticized other fact-checkers in the past who labeled his work "fake news" instead of satire. In reaction to this, he has rebranded all his active websites and Facebook pages so they carry visible disclaimers.