Does the United States spend $900 billion on welfare for undocumented immigrants - money that could go toward funding veteran programs? No, that's not true. The suggestion has been making its way - again - around the internet and has evolved since the earliest discovered claim in 2009. With the evolution, the cost has shot up dramatically, from $338.3 billion to the current meme's $900 billion. This is false information, as even President Trump has said and tweeted that the government currently spends in the area of $200 billion per year.

The meme has had a life since 2015, and it has resurfaced on Facebook, including this post (archived here) published by a Trump-supporting page called President Donald Trump on November 30, 2017. The post is simply the meme, which has garnered nearly 150,000 shares and more than 5,000 likes and 850 comments. The meme reads:

SHARE if you think that the $900 billion per year* spent on welfare on illegal aliens should be spent on our veterans.

Users on Facebook and other social media saw this:

Illegal immigration costs the United States more than 200 Billion Dollars a year. How was this allowed to happen?

The current meme, even by conservative estimates, is about $700 billion off. Consider Turmp's tweet - which came the year following the meme's posting - as well as estimates from the anti-immigration group FAIR - the Federation for American Immigration Reform. In its September 27, 2017, report The Fiscal Burden of Illegal Immigration on United States Taxpayers, it says:

In 2017, the total cost of illegal immigration for the United States - at the federal, state, and local levels - was approximately $116 billion.

FAIR arrived at this number by subtracting the tax revenue paid by illegal aliens - about $19 billion - from the total economic impact of illegal migration, $134.9 billion.

In 2013, the estimated total cost of illegal migration was approximately $113 billion. So, in under four years, the cost has risen nearly $3 billion.

Evidence shows that the tax payments made by illegal aliens fail to cover the costs of the many services they consume.

A large percentage of illegal aliens who work in the underground economy frequently avoid paying any income tax at all.

The Southern Poverty Law Center tracks extremist groups and fights for various rights for marginalized communites. It describes FAIR as "a group with one mission: to severely limit immigration into the United States. Although FAIR maintains a veneer of legitimacy that has allowed its principals to testify in Congress and lobby the federal government, this veneer hides much ugliness."

The Center for Immigration Studies' tagline is "Low-immigration, Pro-immigrant". in a 1994 report titled The Costs of Immigration - Assessing a Conflicted Issue, makes the argument that few of the studies against immigration take into account the large amount of revenue generated by immigrants. In its introduction, the report reads:

Studies abounded in the growth years of the late 1970s and 1980s that assured citizens and political leaders that immigration meant enrichment -- more tax revenues and less demand for services, job creation, rejuvenation of the social security system, and a major boost to the all- important consumer spending.

Regardless, the meme claiming that undocumented, or "illegal" immigrants cost the federal government $900 billion is way off. And this claim, as far back as 2009 on FactCheck.org, has been debunked. At the time of their fact check, the cost being spread through an email chain was $338.3 billion a year.

FactCheck.org, which included the email's text in its debunk, wrote at the time, April 6, 2009, that:

This chain e-mail has been forwarded to us by readers many times over the past year. The most recent version adds a new angle, claiming that the amount of money taxpayers spend on illegal immigrants would be enough to "stimulate the economy." But no matter the spin, the e-mail is rife with errors.

And, writing for the liberal The Hill news outlet, Kristin Tate, a libertarian writer and author of "How Do I Tax Thee? A Field Guide to the Great American Rip-Off," Tate wrote:

Setting aside the legal and moral questions that shape immigration policy, there is a significant tax burden imposed on citizens and legal immigrants tied to a leaky border. President Trump made headlines last year for questioning the costs of illegal immigration. Our dutiful firefighters in the mainstream press fact checked each word and called his $250 billion figure an exaggeration. However, looking at the substance of his argument shows that he was likely on the mark.

The costs of illegal immigration are comprehensive. Even after deducting the $19 billion in taxes paid by illegal immigrants, the 12.5 million of them living in the country results in a $116 billion burden on the economy and taxpayers each year. About two-thirds of this amount is absorbed by local and state taxpayers, who are often the least unable to share the costs.

The $116 billion figure is $200 billion less than the entire United States Social Security system. As for veterans spending, for fiscal 2021, the U.S. Department of Veterans Affairs is requesting a total of $243.3 billion, a 10.2% increase over fiscal 2020 enactments. No one is arguing that veterans get too much - or even enough.

But where does the figure $900 billion in welfare for undocumented immigrants come from? It's anyone's guess, but the claim is grossly exaggerated and never minds the revenues generated by undocumented aliens in the country.

Here is a snapshot of how the meme has looked over the years:

On December 10, 2015, according to a reverse image search, it appeared with an emoji: 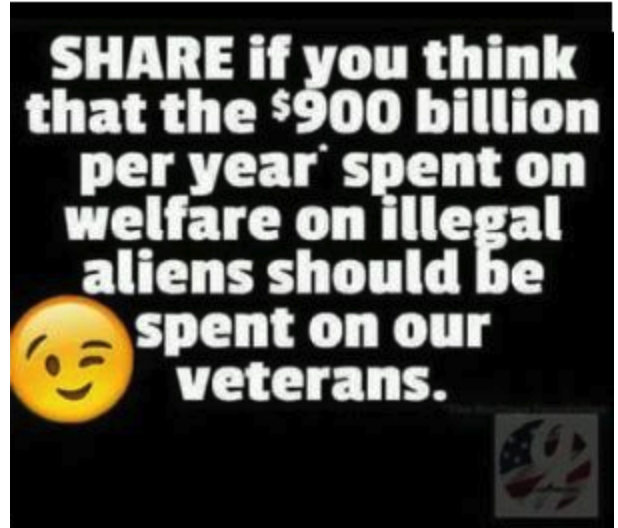 Then, two years later, on March 26, 2017, it appeared with green highlights and a message under it: 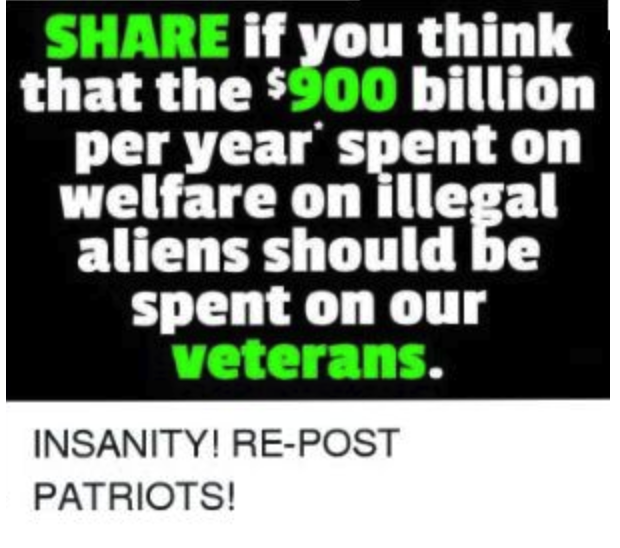 Slight changes; same message. And same conclusion: It's a fake figure with no basis or sourcing.