Is the left-wing, anti-fascist protest movement known as "Antifa" responsible for the deaths of at least 16 people? No, that's not true: Despite the claims being made by Gavin McInnes, the far-right founder of the Proud Boys, a hate crime tracking center said that there had been no homicides by any of the group's adherents in 2018 or 2019.

I am sick of everyone saying antifa hasn't killed anybody. They have at least one mass shooting under their belt as well as murders, suicdes, and death by cop (also suicide). This video doesn't even get into the lives they've ruined where antifa dunces such as David Campbell and Tom Keenan go to prison for "fighting Nazis" who weren't Nazis at all. 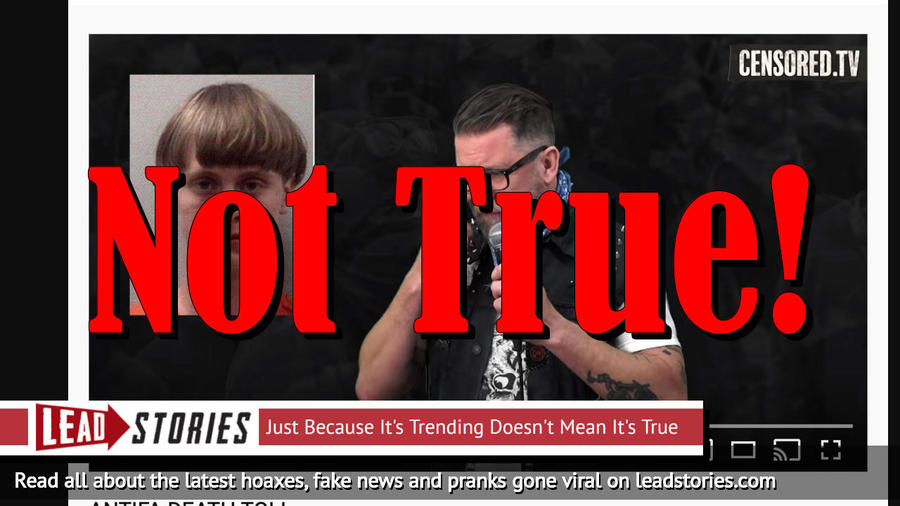 I am sick of everyone saying antifa hasn't killed anybody. They have at least one mass shooting under their belt as well as murders, suicdes, and death by cop (also suicide). This video doesn't even get into the lives they've ruined where antifa dunces such as David Campbell and Tom Keenan go to prison for "fighting Nazis" who weren't Nazis at all.

In the video, McInnes asserted that Antifa is responsible for the deaths of at least 16 people. One of those victims, he claimed, was Heather Heyer, 32, who was marching with counterprotesters at a white nationalist rally in Charlottesville, Virginia, on August 12, 2017. Authorities said Heyer was killed when James Alex Fields, 21, struck her with his vehicle following hours of violent protests between rallygoers and counterprotesters.

McInnes' claim that Antifa is responsible for Heyer's death is completely unfounded. Fields was said to be an admirer of Adolph Hitler and Nazism. He was convicted and sentenced to life in prison in 2019 in connection with her death, according to NBC News.

Lead Stories reached out to Brian Levin from the Center for the Study of Hate and Extremism at California State University, San Bernardino. Levin supplied us with the 2019 "Report to the Nation," which he co-authored. It said:

While there were both a string of politically motivated assaults and suspected crimes--and non-violent protests--by Antifa, anarchists, and hard left extremists, there have been no homicides by any of their adherents in 2018 or 2019.

In an interview with Lead Stories, Levin emphasized, "While there have been numerous instances of assaults and property damage, there have been no homicides attributed by law enforcement to Antifa or related movements."

Levin, however, pointed out that Antifa follower Willem Van Spronsen, 69, was killed during an attack on a detention center in Washington state on July 13, 2019. He was armed with a rifle and was throwing incendiary devices and died in the attack.

A longtime friend of Van Spronsen told The Washington Post, "I think this was a suicide." She added:

I know he went down there knowing he was going to die.

On the other hand, the report said white nationalist and far-right homicides "were the most frequent, rising to 17 in 2018, from 13 a year prior."

Even so, in the video, McInnes seemed to downplay the number of deaths attributed to white nationalists as if they were overstated.

On November 21, 2018, McInnes publicly claimed to have quit the Proud Boys, which he founded in 2016, after The Guardian reported that the FBI had labeled it "an extremist group with ties to white nationalism."

McInnes highlighted several other individuals in the video, and Levin helped us fact check each of these incidents:

Connor Betts, 24, who killed at least nine people in Dayton, Ohio, on August 4, 2019. However, according to Levin, "There was no statement or manifesto by the killer. Nor was there a definitive statement by the FBI, leaving a jumble of anti-social postings and statements that go back years that do not establish a motive in this particular case. Mr. Betts' homicidal ideations go back years - indeed before he had ever mentioned any ideological post on his social media."

Levin added, "Moreover, his social media was a jumble that did not point to a particular motive with respect to this attack." According to CNN, "A preliminary assessment of the writings did not indicate any racial or political motive."

Because this case has not officially been classified as an ideological attack, the nine people Betts killed in the mass shooting should not be included as Antifa victims.

Sean Daniel Kealiher, 23, was an anti-fascist activist who was killed in Portland, Oregon, on October 12, 2019. He was fatally struck by an SUV after a possible quarrel at a local watering hole. Levin told Lead Stories, "There's not been an arrest in this case, and there has been no statement with regard to motive."

Pim Fortuyn, 54, was a Dutch politician who was killed in 2002. Volkert van der Graaf, a 34-year-old animal rights activist, confessed to shooting Fortuyn and claimed to have done so as a favor to the country's Muslim minority. There is no evidence the attack was Antifa-related.

Nathan Hose, 28, apparently took his own life on August 15, 2017, in New Orleans, Louisiana, according to an online obituary. Little is published about Hose's beliefs, but his name did appear in a brief post on a website for anti-fascist movements. Still, Levin's report focused on homicides, not suicides.

Charlie Landeros, 30, was killed on January 11, 2019, during a struggle with police outside a middle school. While the man was wearing a T-shirt that read, "Smash the patriarchy and chill," at the time of the shooting, the struggle apparently centered over a custody dispute. According to Levin, "I don't have any indication that that was related to a premeditated, ideological act of terrorism." He added, "If it's a non-ideological incident, we don't count it."

McInnes has been accused of using the group to promote violence, but he said those comments had been taken out of context, The Guardian reported.