Did President Trump send President Obama a bill for tax-payer funded vacations that Obama has taken since leaving office? No, that's not true: This is a satirical story created by a website that publishes fake content aimed at a conservative audience.

The claim surfaced in a post (archived here) on Facebook on January 16, 2020, under the title "PRESIDENT TRUMP JUST ENDED THE OBAMA'S VACATION SCAM!". It opened:

Ex-President Obama was going to stick us for $2.1 billion or so. Before Obama left office, he arranged with the State Department for a series of "official visits"
to foreign countries spanning the next 20 years. Using funds from the Office of Presidential Visits and Vacations, Obama was planning to use what would have been $2.1 billion in free vacations for him and up to 24 members of his family plus staff and even a dog sitter until the year 2036. 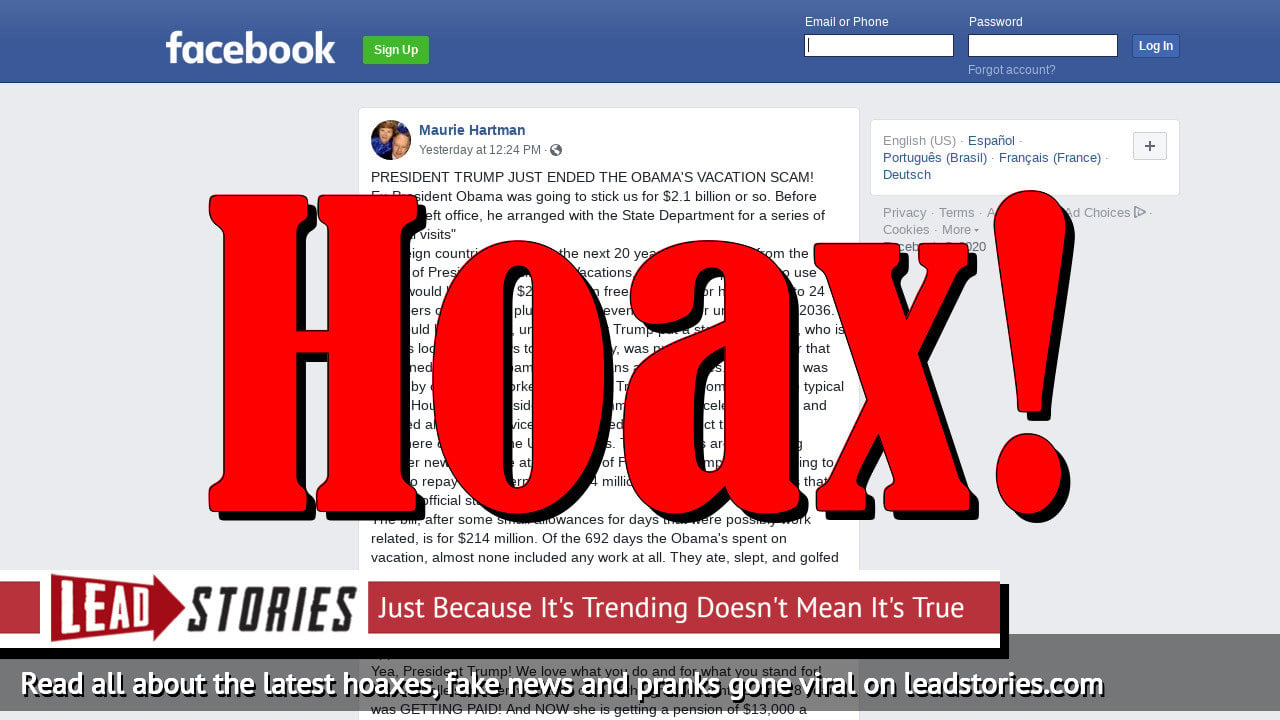 Obama was going to stick us for $2.1 billion or so. Before Obama left office, he arranged with the State Department for a series of "official visits" to foreign countries spanning the next 20 years.

The story goes on to claim Trump immediately canceled the plans, re-billing the Obama's for the $214 million already spent. He also was said to have recalled all Secret Service agents scheduled to protect the Obamas anywhere outside of the United States, which, in turn, left the family stranded in Kenya awaiting documents.

The entire article is entirely fictional. The Obama family was never stuck overseas, and they have not been billed by Trump for vacations or anything else taken after leaving office.

The story dates to February 14, 2017, but it has since been deleted - even though users on social media are still posting the contents on Facebook and Twitter. The original piece was posted by THE RESISTANCE: THE LAST LINE OF DEFENSE, which is archived here.

The original version of the story came with a clear satire disclaimer, but it reappeared in various forms, including on Facebook and Twitter, without letting the reader know it was fiction.

We have written about Facebook before. Here is a recent article that mentions the site: