Does data from Windy.com show a massive release of sulfur dioxide gas near Wuhan, China, which is commonly associated with the burning of organic matters? No, that's not true: The images are not satellite measurements. A member of the NASA sulfur dioxide (SO2) team told Lead Stories that their satellite retrievals did not show significantly enhanced SO2 measurements over the region.

The claim originated from a series of tweets published by Intelwave (@inteldotwav) on February 8, 2020 (archived here). It opened:

Data from windy.com shows a massive release of sulfur dioxide gas from the outskirts of Wuhan, commonly associated with the burning of organic matters. Levels are elevated, even compared with the rest of China. 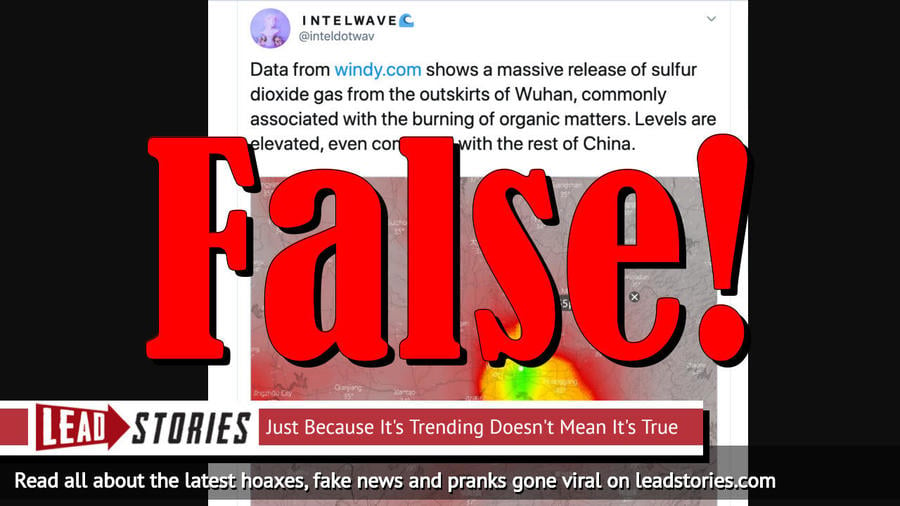 "Data from https://t.co/oDMad8pquE shows a massive release of sulfur dioxide gas from the outskirts of Wuhan, commonly associated with the burning of organic matters. Levels are elevated, even compared with the rest of China."

The image has been cited by several other websites and newspapers to suggest that bodies were being burned on a massive scale to control the novel coronavirus outbreak, which originated in Wuhan, China. As of February 18, 2020, the virus has killed at least 1,868 people, according to The New York Times.

And the third and most morbid: Dead bodies are being burned on the outskirts of the city, the death numbers are way higher than the CCP is letting on about, and things are really, really bad.

The picture in the claim looks like model data and NOT satellite measurements.

We asked Krotkov to clarify the difference between model data and satellite measurements. He said:

Emissions inventories (SO2, NO2, etc.) are fixed, outdated and it takes years to compile and update them. Models cannot account for changes of pollutant EMISSIONS from day to day.

Satellite data show what gases and aerosols are actually measured at an overpass time over any cloud-free region. They are used to VERIFY model pollution forecasts.

In this case satellites do NOT see enhanced SO2 pollution over Wuhan region, which means that model SO2 emissions were not correct.

The suppositions from the original series of tweets have also been debunked by fullfact.org, which concluded that the images do not show evidence of mass cremations in Wuhan. It wrote:

False. The maps are not satellite images, and do not show actual levels of sulphur dioxide. They are simply forecasts based on historical data and weather patterns.

On February 12, 2020, Open, an Italian website, also rated the claim improbable. It quoted a chemistry professor from the University of Palermo who estimated it would take 30 million bodies to achieve the levels in the claim, which is simply impossible.

We wrote about disinformation on Twitter before. Here are our most recent articles that mention the site: