Did the World Health Organization's director-general overstate the COVID-19 fatality rate when he said that it was many times that of the seasonal flu? No, that's false: Director-General Tedros Adhanom Ghebreyesus accurately stated that the death rate of COVID-19 is much higher than the flu. A known right-wing website has falsely stated Ghebreyesus got his figures wrong, causing unnecessary panic.

The claim appeared in an article published by The Gateway Pundit on March 17, 2020, titled "EXCLUSIVE: Evidence Shows Director General of World Health Organization Severely Overstated the Fatality Rate of the Coronavirus Leading to the Greatest Global Panic in History". The story (archived here) opened:

The controversial Ethiopian politician and Director General of the World Health Organization (WHO), Tedros Adhanom Ghebreyesus, claimed in a press conference in early March that the fatality rate for the coronavirus was many multiples that of the fatality rate of the common flu. This egregiously false premise has led to the greatest panic in world history. 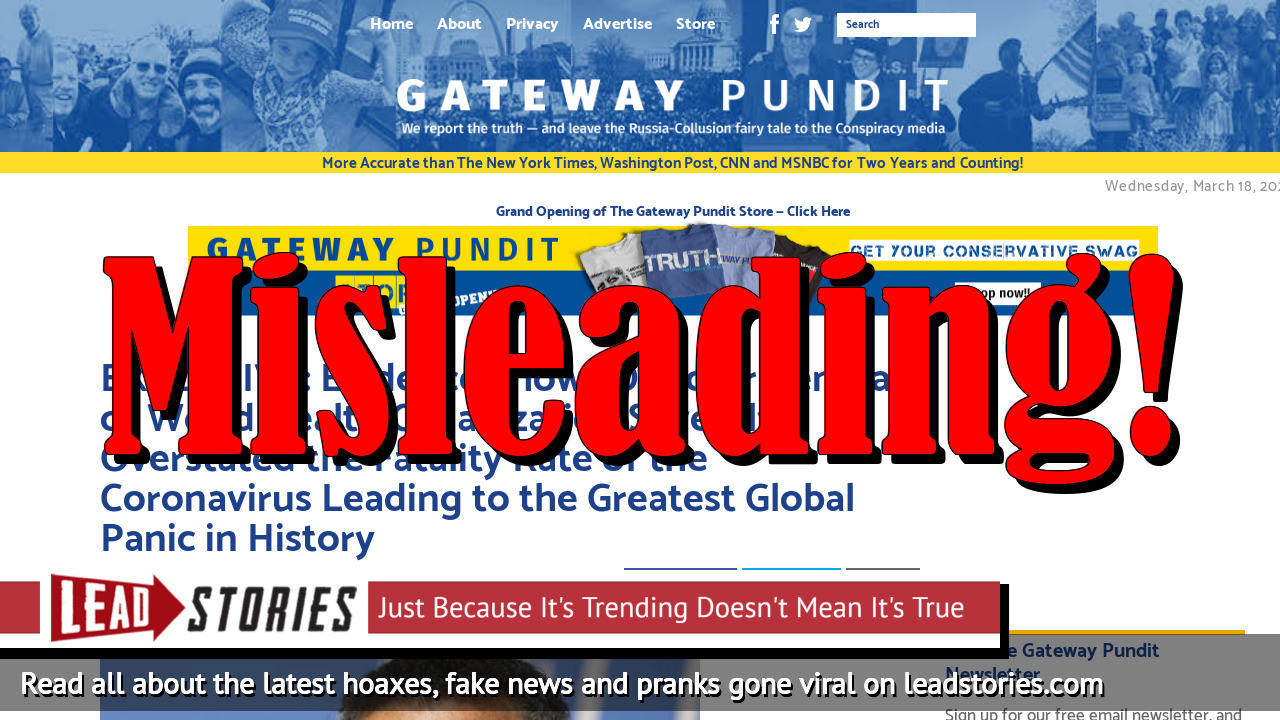 The story attributes the following quote to the director-general:

Globally, about 3.4% of reported COVID-19 cases have died. By comparison, seasonal flu generally kills far fewer than 1% of those infected."

That statement by the director-general is accurate, backed up by flu health data dating back to the 1970s that has consistently shown the death rate from flu is less than 1%, according to the US Centers for Disease Control and Prevention.

"The annual rate of influenza-associated death in the United States overall during this period ranged from 1.4 to 16.7 deaths per 100,000 persons," the study found. "The findings also indicated the wide variation in the estimated number of deaths from season to season was closely related to the particular influenza virus types and subtypes in circulation."

Dr. Anthony Fauci, the director of the National Institute of Allergy and Infectious Diseases, told lawmakers just that this month:

Fauci used a much more conservative death rate of 1% for coronavirus when he made that statement. He added he hopes that, when more people are tested, the death rate will come down.

As of this writing, there have been 8,732 reported deaths from coronavirus worldwide out of 214,894 - or a staggering 4% overall death rate.

The flu vaccine prevents thousands of Americans from falling ill, preventing even more deaths, the CDC says. Even so, the CDC estimates 36 million to 51 million Americans get the flu every year, with the annual deaths ranging from 22,000 to 55,000. These facts didn't stop The Gateway Pundit from running with its "exclusive", and the author writing the comment from the WHO director-general "led to the greatest panic in world history as the media all over the world shared and repeated that the coronavirus was many, many times more deadly than the common flu."

While Tedros did make the statement, the article did not include the context he provided in the same statement. With the context, it makes clear that the fatality rate he cited describes the proportion of deaths among confirmed coronavirus cases.

The article goes on to say that Tedros "used the fatality of coronavirus with known numbers and used this as his prediction of eventual mortality rate."

Tedros did not say - and has not said - that the 3.4% fatality figure would prove to be the "eventual mortality rate."

Health officials have repeatedly said that testing has been focused on people with serious symptoms because few tests were available in many places during the early days of the outbreak. By excluding people with no symptoms or mild symptoms, they said, the case fatality rate they calculated likely far exceeds the case fatality rate that will be calculated once tests are widely available. Only then will people with mild or no symptoms be included in the calculation.

The article also features a graph that compares confirmed flu cases with confirmed COVID-19 cases. Here is their chart, which The Gatweway Pundit writes, proves " the Director General's statement was very misleading and materially false":

Because influenza surveillance does not capture all cases of flu that occur in the U.S., CDC provides these estimated ranges to better reflect the larger burden of influenza."

Newsguard, a company that uses trained journalists to rank the reliability of websites, describes thegatewaypundit.com as:

According to NewsGuard, the site does not maintain basic standards of accuracy and accountability. Read its full assessment here.