Did NASA warn that a 4KM asteroid was approaching the Earth? No, that's not true, while NASA tracks many asteroids, this one poses no threat to our planet, and no warning has been issued. Lead Stories reached out to NASA, which confirmed that there is simply no danger - at all - of this asteroid impacting Earth, much like other asteroids and other space objects currently tracked by the space agency.

AN ASTEROID capable of ending human civilisation if it hits will approach our planet in April, NASA's asteroid trackers have confirmed.
The asteroid is listed by NASA's Center for Near Earth Object Studies' (CNEOS) in California, US. The asteroid has been officially called 52768 (1998 OR2) and is estimated measure up 2.5 miles (4.1km) across.
An object this big could potentially kill millions of people if it ever hit the planet in the distant future.
NASA estimates the rock is heading our way at speeds of about 8.7km per second or 19,461mph (31,320kmh).
At this rate, the asteroid will close-in on Earth on April 29.
When this happens, NASA said the asteroid will make a "close approach" to our planet.
According to the Planetary Society, an asteroid bigger than 0.6 miles (1km) across is big enough to threaten global destruction.

AN ASTEROID capable of ending human civilisation if it hits will approach our planet in April, NASA's asteroid trackers have confirmed.

The Daily Express shared the article on their Facebook page here on March 2, 2020, with a caption that only read, "Terrifying." In just four days, between four tweets of the story spread across several days, the post had gathered 53,000 shares on Facebook. The @Daily_Express twitter account had accumulated about 137,000 reactions, including 32,317 retweets. 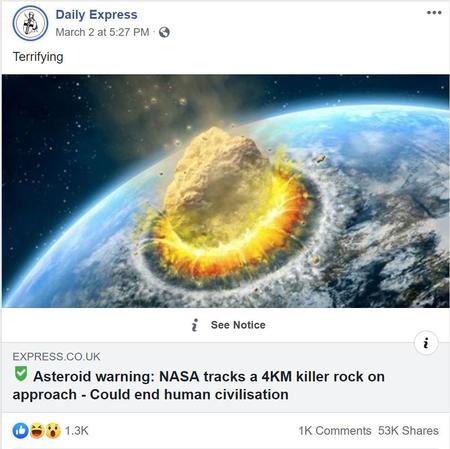 Lead Stories reached out to Dr. Paul W. Chodas, the Director at NASA's Center for Near Earth Object Studies (CENOS), for comment. He replied:

Yes, these articles are problematic: They are completely misleading because they imply there is a chance that these asteroids can impact the Earth. They misrepresent the results from CNEOS.

CNEOS tracks all the near-Earth asteroids, and we publish predictions of close approaches to Earth here: https://cneos.jpl.nasa.gov/ca/

The article correctly points out that 1998 OR2 will approach Earth to 16.36 Lunar Distances (LD), or about 6.3 million km, on April 29. They get that number from our table, and we get that number from our calculations of the asteroid orbit. We have been tracking this asteroid for decades, and we have lots of data! But, there is no chance at all that this asteroid or any other on the table can impact!

This should be clear from the column "labeled CA Distance Minimum" which clearly states that the minimum possible close approach distance is the same: 16.36 LD: we know that it can't get any closer, even including all the uncertainties in the calculations! We don't "Issue a Warning" because there is no hazard whatsoever: Again, there is ZERO chance of an impact.

Through the Planetary Defense Coordination Office, NASA has a clear protocol for when an actual warning is warranted and how that is to be carried out.

The asteroid has been named 2012 XA133 and is flying our way on a "close approach" trajectory. At its current speed, NASA estimates the space rock will close-in on us before the end of March."

What did Chodas have to say about that?

Furthermore, all the close approaches on our table have ZERO chance of impacting, including 2012 XA133.

This article is mostly false, because its main point is to suggest there's a danger when there is absolutely no danger.

We have another webpage where we list all asteroids that DO have a chance of impacting Earth: https://cneos.jpl.nasa.gov/sentry/

In other words, if an asteroid has a chance of impacting, it will be on this page, not the other.

Encounters on the Sentry page all have very small probabilities, most of those encounters are decades away, and 90% of the asteroids are so small that they would burn up in the atmosphere. Furthermore, as we track those objects, we expect that our prediction accuracy will improve to the point that we rule out most if not all of the potential impacts on this list.

The Center for Near Earth Object Studies sent out a tweet regarding this article.

On April 29. asteroid 1998 OR2 will safely pass Earth by 3.9 million miles/6.2 million km. A @Daily_Express article implying there is a "warning" about this asteroid is false. A complete listing of all asteroid passes is always public at https://t.co/i6i8HwCDJq. Carry on!


The article contains several sci-fi art images. The featured digital illustration by Andrea Danti titled, "Big asteroid crashing on the surface of an Earth-like planet", depicts an imaginary fiery impact. This image is widely available as a stock image. It seems clear that the artist had no intention to accurately illustrate - or misrepresent - this specific scenario. By using the picture, the image's impact becomes at least as strong as the misleading headline.

The Earth's curvature in the illustration was scaled and matched to an image of Earth sourced from NASA. We can now compare the size of the imaginary space rock to Earth's diameter. 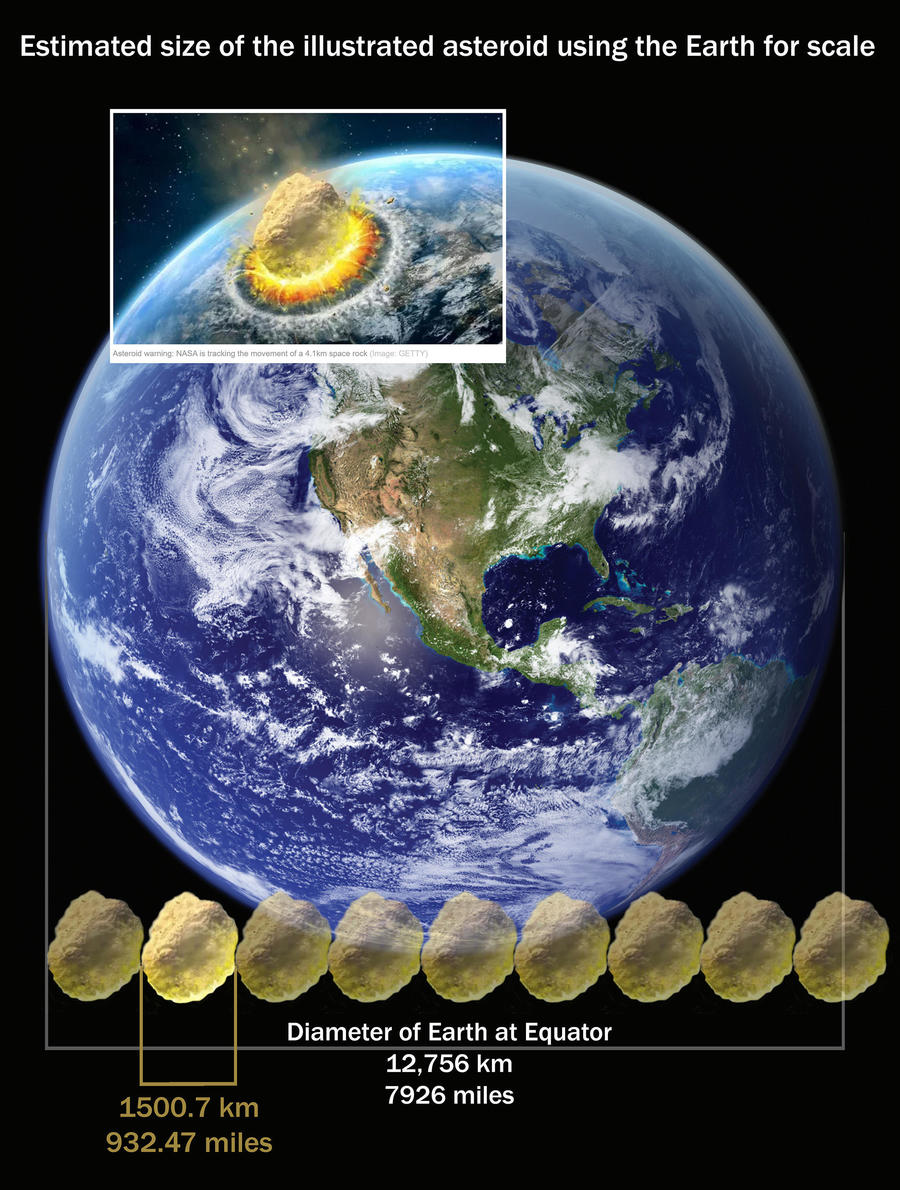 The illustrated space rock is estimated to be about 1,500 km across (or 932 miles). Using Photoshop, we scaled the rock in the illustration to be 3,000 pixels wide. Then, we could measure, pixel by pixel, to depict the approximate size of the real asteroid in relation to the one in the illustration. There are two tiny dots included inside the dark square, and they represent the smaller and larger limits of the estimated size (1.5- 4.1 km) of the 52768 (1998 OR2) asteroid. 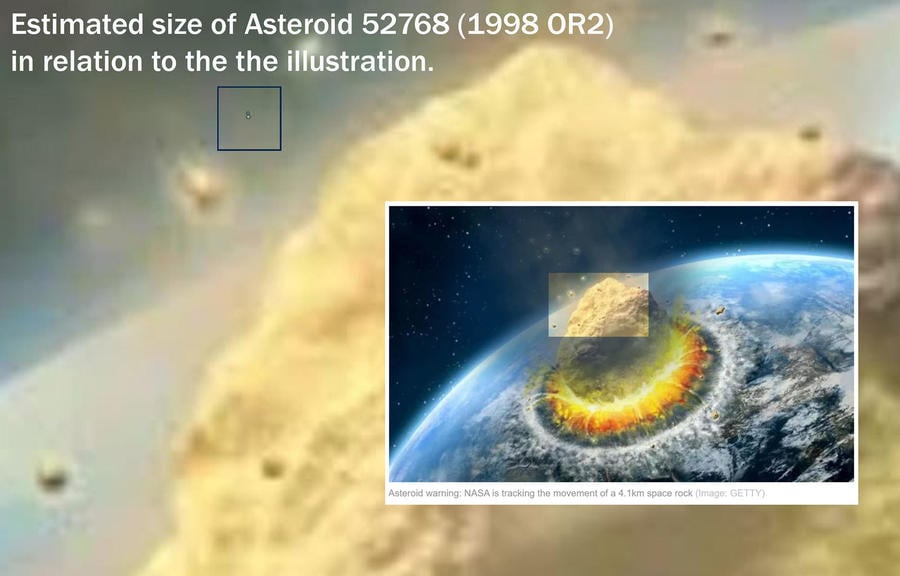 If we scaled this down to a model on a map of the United States, put the Earth at New York City and the Moon at Harrisburg, Pennsylvania- 16.36 times that distance would take us across the country to Los Angeles.

Here is a sampling of asteroid headlines collected from Daily Express:

Worry not. None of these asteroid warnings were followed by civilization-destroying impacts.