Did genetic mutations cause the coronavirus to become more dangerous? No, there is no evidence of that.

Feeling confused as to why Coronavirus is a bigger deal than Seasonal flu? Here it is in a nutshell. I hope this helps. Feel free to share this to others who don't understand...
It has to do with RNA sequencing.... I.e. genetics.
Seasonal flu is an "all human virus". The DNA/RNA chains that make up the virus are recognized by the human immune system. This means that your body has some immunity to it before it comes around each year... you get immunity two ways...through exposure to a virus, or by getting a flu shot.
Novel viruses, come from animals.... the WHO tracks novel viruses in animals, (sometimes for years watching for mutations). Usually these viruses only transfer from animal to animal (pigs in the case of H1N1) (birds in the case of the Spanish flu). But once, one of these animal viruses mutates, and starts to transfer from animals to humans... then it's a problem, Why? Because we have no natural or acquired immunity.. the RNA sequencing of the genes inside the virus isn't human, and the human immune system doesn't recognize it so, we can't fight it off.
Now.... sometimes, the mutation only allows transfer from animal to human, for years it's only transmission is from an infected animal to a human before it finally mutates so that it can now transfer human to human... once that happens..we have a new contagion phase. And depending on the fashion of this new mutation, thats what decides how contagious, or how deadly it's gonna be..

The post is "generally correct," said Dr. Michael Saag, an infectious disease specialist at the University of Alabama at Birmingham, in an email. He cited the novel nature of the virus -- i.e., it has not been seen before in humans -- as meaning that "everyone is susceptible."

But he questioned whether the putative "slippery" nature of the virus -- the supposed rapid appearance of genetic mutations -- was responsible for its virulence. That has not been proven, he said.

A story published March 25, 2020, in the Washington Post backs him up, reading:

The coronavirus is not mutating significantly as it circulates through the human population, according to scientists who are closely studying the novel pathogen's genetic code. That relative stability suggests the virus is less likely to become more or less dangerous as it spreads, and represents encouraging news for researchers hoping to create a long-lasting vaccine."

The Post quoted virologists Stanley Perlman of the University of Iowa and Benjamin Neuman of Texas A&M University at Texarkana as saying the virus appears stable.

"The virus has not mutated to any significant extent," Perlman said.

"Just one 'pretty bad' strain for everybody so far," Neuman added. "If it's still around in a year, by that point we might have some diversity."

Saag said it was also not clear that the human immune system works only against human RNA:

H1N1 was deadly....but it did not mutate in a way that was as deadly as the Spanish flu. It's RNA was slower to mutate and it attacked its host differently, too.
Fast forward.
Now, here comes this Coronavirus... it existed in animals only, for nobody knows how long...but one day, at an animal market, in Wuhan China, in December 2019, it mutated and made the jump from animal to people. At first, only animals could give it to a person... But here is the scary part.... in just TWO WEEKS it mutated again and gained the ability to jump from human to human. Scientists call this quick ability, "slippery"
This Coronavirus, not being in any form a "human" virus (whereas we would all have some natural or acquired immunity). Took off like a rocket. And this was because, Humans have no known immunity...doctors have no known medicines for it.
And it just so happens that this particular mutated animal virus, changed itself in such a way the way that it causes great damage to human lungs..
That's why Coronavirus is different from seasonal flu, or H1N1 or any other type of influenza.... this one is slippery AF. And it's a lung eater...And, it's already mutated AGAIN, so that we now have two strains to deal with, strain s, and strain L....which makes it twice as hard to develop a vaccine.
We really have no tools in our shed, with this. History has shown that fast and immediate closings of public places has helped in the past pandemics. Philadelphia and Baltimore were reluctant to close events in 1918 and they were the hardest hit in the US during the Spanish Flu.
Factoid: Henry VIII stayed in his room and allowed no one near him, till the Black Plague passed...(honestly...I understand him so much better now). Just like us, he had no tools in his shed, except social isolation...
And let me end by saying....right now it's hitting older folks harder... but this genome is so slippery...if it mutates again (and it will). Who is to say, what it will do next.
Be smart folks... acting like you're unafraid is so not sexy right now.
#flattenthecurve. Stay home folks... and share this to those that just are not catching on.

Saag, who was recovering at home from a case of the coronavirus, challenged the post's assertion that public health officials have no more tools in the shed. "We have social distancing and isolation," he said. "That is important!"

He noted that President Trump has raised the possibility of dropping those tools by Easter to give a jolt to the economy. "Sounds ill-informed to me," he said.

Saag corroborated the post's assertion that reluctance by officials in Philadelphia and Baltimore to close public events was blamed for those two cities being hit hard by the Spanish Flu in 1918.

But the claim about Henry VIII staying in his room to avoid the Black Plague does not square with the history as told by History.com.

"In 1528, Henry VIII slept in a different bed every night -- and not in the way you might think," it said. "He did have a mistress, his wife's lady-in-waiting Anne Boleyn. But it was fear of disease that drove him to move almost daily that summer. The king was terrified of sweating sickness, a deadly epidemic that is nearly forgotten today."

The Black Death swept across Europe and Asia in the mid 1300s. Henry VIII lived from 1491 - 1547, during the time of the sweating sickness, a disease that left an imprint on literature as well as on humanity.

Paul Heyman, author of a 2014 article about the illness in the journal Viruses, wrote:

Due to its sudden onset and its often fatal course, the English sweat became much feared and even Shakespeare expressed his concern for a re-emergence in his work "Measure for measure" (1604): 'Thus, what with the war, what with the sweat, what with the gallows, and what with poverty...'" 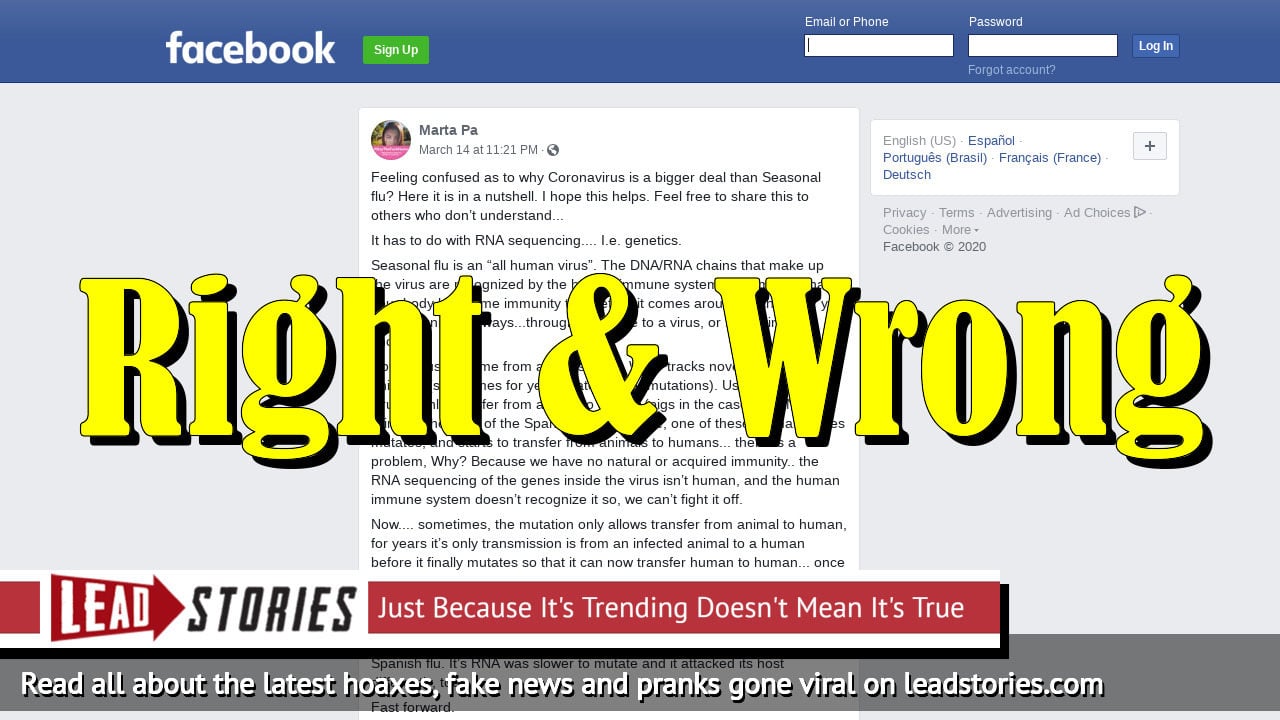 There are many versions of this post circulating, each attributing the origin of the information to a different "reliable source." 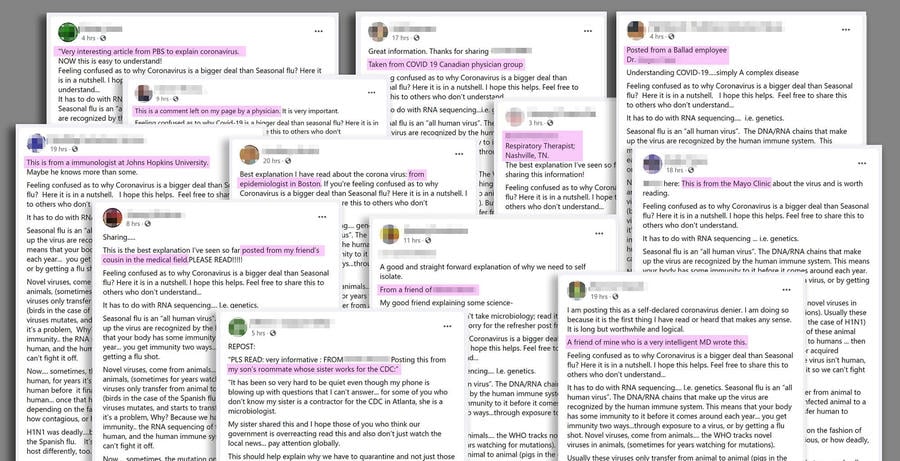 Vox published this graphic comparing the seasonal flu to the novel coronavirus on March 18, 2020: 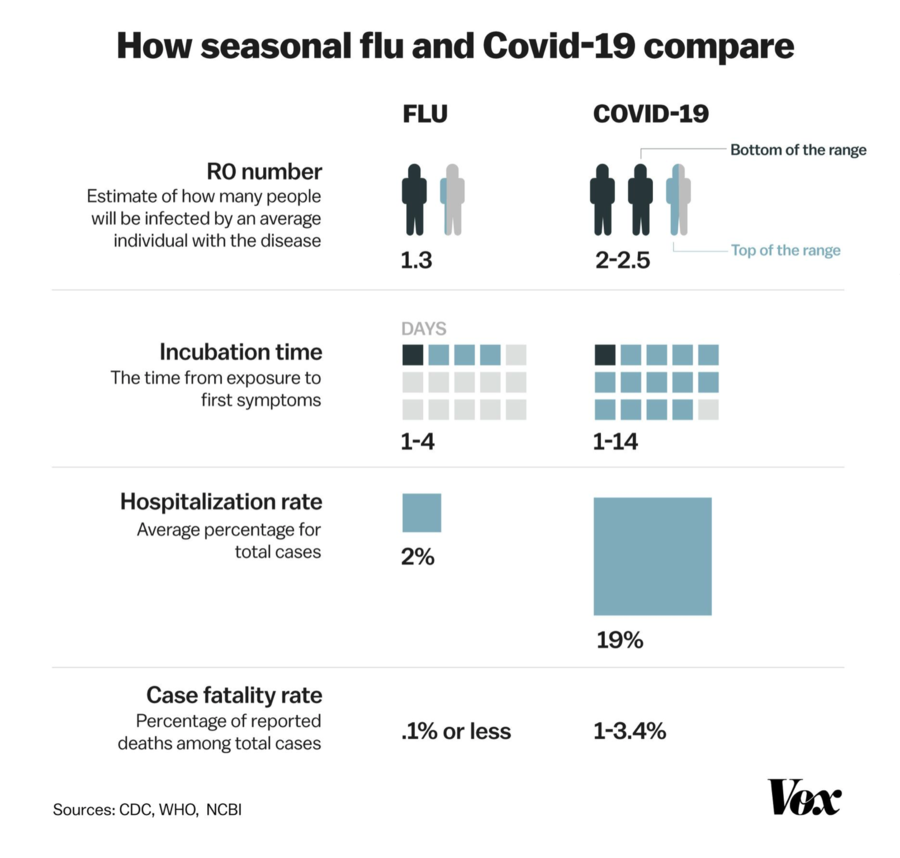 They both cause a wide range of respiratory disease, which can present as asymptomatic or mild through to severe disease and death.

The viruses that cause the diseases are both transmitted by contact, droplets and surfaces.

But they differ in speed of transmission, according to WHO:

Some 5% of COVID-19 cases require ventilation, "higher than what is observed for influenza infection."

And mortality for COVID-19 appears higher than for influenza, according to WHO:

WHO added that there is no approved treatment or vaccine for COVID-19, while antivirals and vaccines are available for influenza.