Did President Trump sign a bill that addresses the future of 5G infrastructure? Yes, that's true: the Secure 5G and Beyond Act of 2020 was signed on March 23, 2020, but a video detailing the potential fallout of expanding 5G technology is exaggerated.

The claim came from a video (archived here) where it was published by The Last American Vagabond on March 26, 2020, under the title "5G Bill Signed Into Law While Everyone Is Distracted By Coronavirus." It opened:

Now, on top of all the agendas, yes, the big one we're talking about right now today is the fact that they just passed this: actually on the 23rd, on Monday March 23rd, 2020, the President signed into law S893 the Secure 5g and Beyond Act of 2020, which requires the President to develop a strategy, quote
one, to "ensure the security of next-generation mobile telecommunication systems and infrastructure of the United States" and "to assist allies and strategic partners in maximizing the security of next-generation mobile telecommunication systems infrastructure." 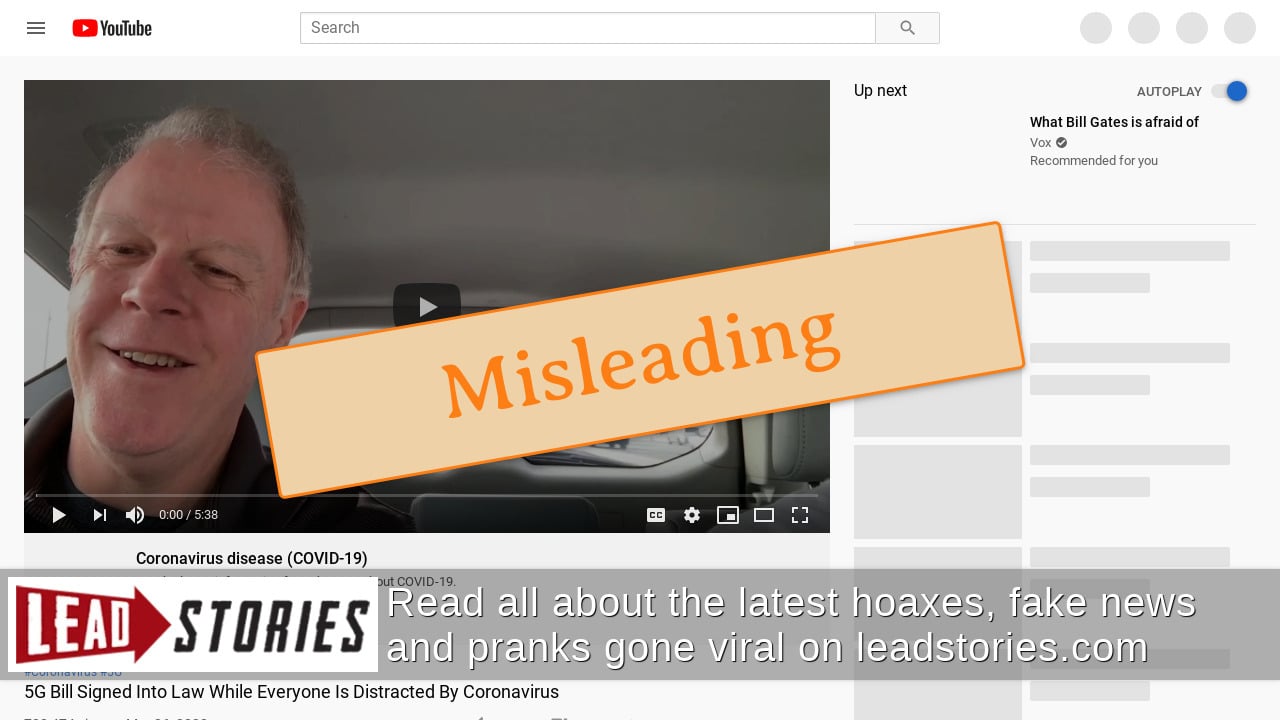 That is true. The White House announced the bill via press release on March 23. Ryan Cristian, the host of the YouTube show, quotes directly from the press release to introduce the topic.

Cristian then says that it's alarming that the president is signing this bill into law while Americans may not be aware of what 5G technology is, how it affects them and how it will be regulated. Cristian says:

But the bottom line is: is it not alarming in and of it itself that Donald Trump is going to sign into law a bill about 5G under the mit -- under the guise of all of this? While we are not OK with this, right. This is pushing forward, understand.

Cristian then moves to citing an article by Children's Health Defense, asking California Gov. Gavin Newsom to stop expanding 5G infrastructure in in schools, especially during the COVID-19 quarantine. The state went under a stay-at-home order on March 19.

The Children's Health Defense article links to another article by Military News that it supposedly cites when Newsom announced "his intention to expand the deployment of wireless infrastructure in schools, during the COVID-19 quarantine."

But the link only brings readers to an unrelated article that was pulled from Los Angeles Times reporter Taryn Luna.

The Children's Health Defense website also frequently populates anti-vaccine content. The non-profit organization is run by Robert F. Kennedy, who has previously been accused of disseminating false and misleading information about health and vaccines.

Yet Cristian cites the Children's Health Defense site in his video:

That's what it says, guys. I was bombarded by today with stuff online in California and other places, by the way, across the country, saying they are secretly installing 5G technology in their schools while the quarantine's under way."

And while some local leaders in California towns have advocated for keeping areas that are heavily populated by children off of developer's lists for wireless towers that can access the 5G networks, there haven't been recent reports of 5G installations in schools.

Cristian then aims to show a laundry list of symptoms associated with 5G exposure, citing only one article written by the CEO of Shield Your Body, a company that sells various forms of tech covers and clothing that block out EMF radiation.

But an international radiation watchdog, along with several researchers and news outlets have concluded that 5G is safe at the level its being used in practice, according to The Guardian:

The International Commission on Non‐Ionizing Radiation Protection (ICNIRP), the Germany-based scientific body that assesses the health risks of radio broadcasts, called for new guidelines for millimetre-wave 5G, the most high-frequency version of the telecommunications standard.

But in practice, that form of 5G, which is in use in the US and will be coming to Europe, still has output levels significantly below the new maximum.

It is worth noting that the actual study conducted by ICNIRP found, in summary, that there is no evidence for compromised health at certain levels:

Cristian also cites the same Shield Your Body article, which claims the International Agency for Research on Cancer designated 5G radiation as a class 2B carcinogen. That's true, but the claim also lacks a bit of context.

A class 2B carcinogen means a substance is possibly carcinogenic to humans, according to the International Union of Pure and Applied Chemistry:

There is some evidence that it can cause cancer in humans but at present it is far from conclusive."

And a lot of things are classified as class 2B carcinogens like aloe vera or pickled vegetables. So being exposed to a 2B carcninogen -- and those far more threatening -- is not uncommon.

He also cites an article by howtogeek.com, but only selectively reads a part of the article that says "radiofrequency radiation that can damage DNA and lead to cancer; cause oxidative damage that can cause premature aging; disrupt cell metabolism; and potentially lead to other diseases through the generation of stress proteins."

But the full quote actually attributes this opinion to outsiders:

Some 5G pundits contend that the new network generates radiofrequency radiation that can damage DNA and lead to cancer; cause oxidative damage that can cause premature aging; disrupt cell metabolism; and potentially lead to other diseases through the generation of stress proteins."

And the same article seems to assert the opposite opinion expressed by the video's excerpt:

In 2011, the World Health Organization weighed in, classifying RF Radiation as a Group 2B agent, which is defined as "Possibly carcinogenic to humans." This, too, is nuanced. Says Novella, "you have to look at all the other things they classify as a possible carcinogen. They put it in the same class as things like caffeine. That is such a weak standard that it basically means nothing. It's like saying 'everything causes cancer.'"

So the consensus seems to be that there's the potential for hazard, but not enough research or evidence can confirm that 5G is cause for alarm as a public health threat.