Did the Kennedy Center give the Democratic National Committee $5 mllion after getting $25 million in relief from the government coronavirus stimulus package? No, that's not true: The Kennedy Center did not give the DNC $5 million the day after being awarded $25 million, despite posts on social media claiming that this was the case.

The claim appeared as a post (archived here) on Facebook on March 29, 2020, under the title "Why did we give the Kennedy Center 25 mil?" It read:

Completes a $250 M renovation 2019: Receives $41 M from taxpayers Yesterday: Gets $25 M from Relief Bill Today: Tells musicians it will stop paying them Donates $5 M to the DNC The Kennedy Center launders taxpayer money for the Democrats.

The post, and many like it, claims The John F. Kennedy Center for the Performing Arts gave $5 million to the DNC the day after being told they would receive $25 million in the Congressional stimulus aimed at rejuvinated an economy battered by the COVID-19 pandemic. The United States, which has more cases globally than any other country, is under a national emergency as declared by President Trump.

In fact, the government relief funds have not be delivered to anyone or any group yet, so the post's claims would be impossible. Still, the story went viral on Facebook, with each post earning hundreds of likes and shares.

Once it started getting shared, the posts drew angy commenters furious about reports - now shown to be fake - that the Kennedy Center was giving $5 million to the DNC.

User Cari Kelemen appears to have fueled the fake news in a tweet that went viral.

Completes a $250 M renovation
2019: Receives $41 M from taxpayers
Yesterday: Gets $25 M from Relief Bill
Today: Tells musicians it will stop paying them
Donates $5 M to the DNC

The Kennedy Center launders taxpayer money for the Democrats.

She incorrectly told her 44,000 followers that the Kennedy Center, the performing arts conglomeration in Washington, DC, donated $5 million to the DNC the day after getting a deposit of $25 million from the government.

Kelemen followed her first Tweet up with her theory about how Planned Parenthood "launders taxpayer money for the Democrats."

And Planned Parenthood launders taxpayer money for the Democrats in the same way. The Democrats make sure PP gets millions in taxpayer dollars and then PP donates millions back to the DNC.

Twenty-two hours after her first tweet, Kelemen "clarified" her statement to say she had written about a "next-step hypothetical," but didn't acknowledge her own, original words were false.

To clarify, my original tweet should have said:
*Tomorrow* donates $5 M to the DNC.
It was meant as a next-step hypothetical based on the way the DNC has used Planned Parenthood to launder taxpayer money in the past. I did not intend to confuse anyone. Apologies if I did.

The Kennedy Center contributes almost exclusively, over 98%, to Democrat candidates and causes. I took a hearsay tweet at face value and did not verify the 5 million as a lump sum contribution, my apologies. That sum could have been confused with a 5 M contribution from UAE. 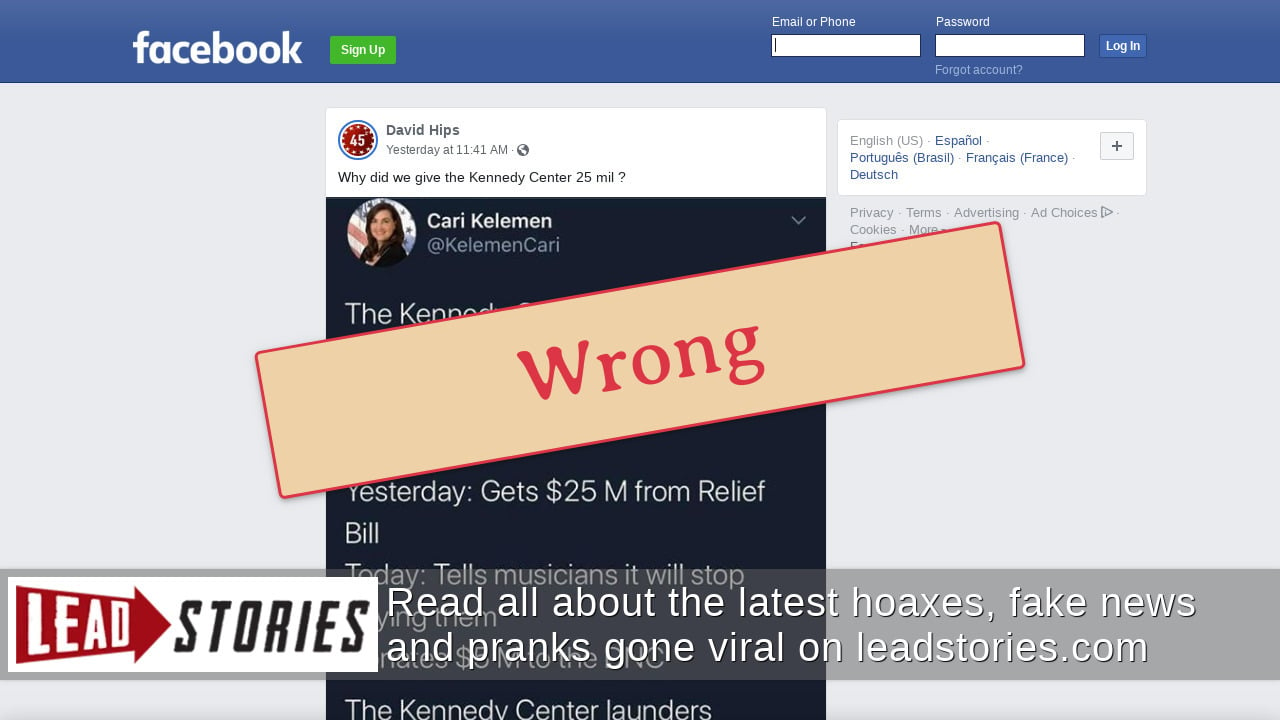